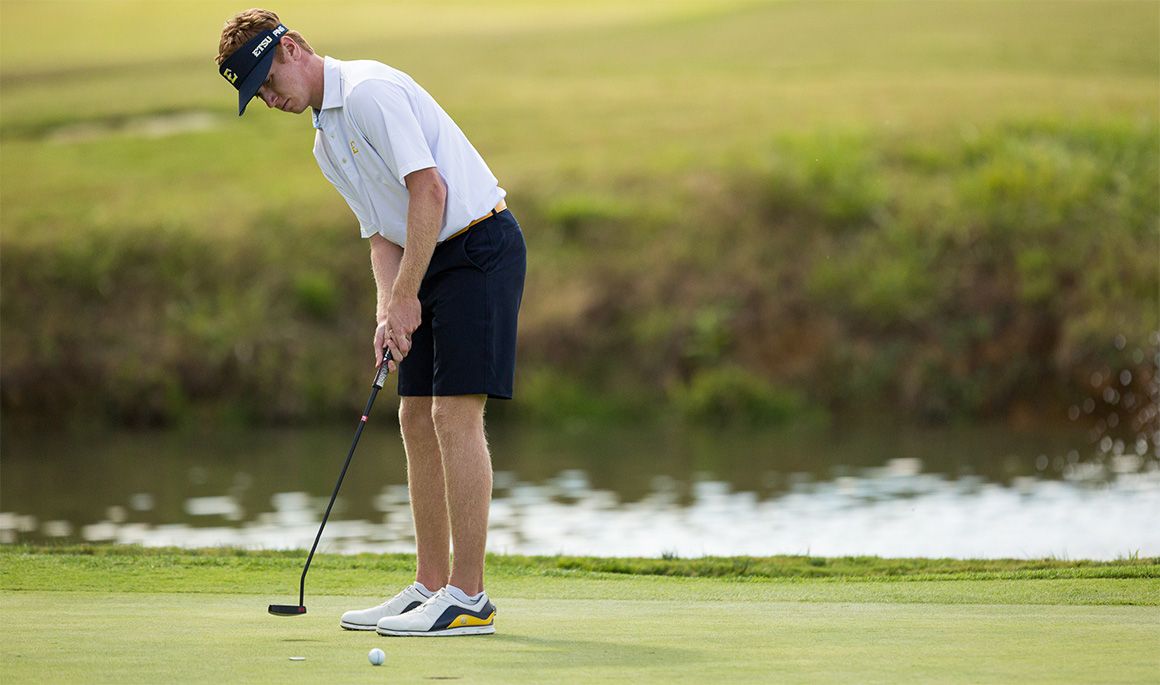 Jack Rhea fires 67 in opening round

JONESBOROUGH, Tenn. (Oct. 11, 2019) – The ETSU Buccaneers Men’s Golf team had to shake off a rusty start in the lone home event of the season as the Bucs opened the 2019 Bank of Tennessee Intercollegiate with a 7-under-par (281) in the opening round on Friday afternoon. This is the 22nd edition of the tournament as 15 teams took the course at The Blackthorn Club at the Ridges in Jonesborough, Tenn.

ETSU started the event at 1-over-par through the first three holes, before clawing out an even-par 144 on the front nine as a team. The Bucs caught fire on the closing nine holes, shooting 7-under-par (137) as a unit down the stretch to make the jump from 12th to 6th on the leaderboard.

Jack Rhea (Jonesborough, Tenn.) jumped in red figures following the first hole with a birdie on No. 1. The Tennessee junior would relinquish the stroke with a bogey on hole No. 3, but that would be Rhea’s lone blemish in his round. Rhea bounced back with a birdie on No. 4 and a third birdie on the front nine following his birdie on the par-3 No. 7. The Tennessee native made the turn at 2-under-par (34) and quickly climbed the leaderboard with back-to-back birdies on No. 10 and No. 11 to move to 4-under-par. However, Rhea’s momentum stalled following six consecutive pars until he ignited the home crowd with a birdie on No. 18. Having to hit over the green-side pond on No. 18, Rhea decided to attack the flag over the pond and stuck the shot, resulting in yet another birdie for the Blue & Gold competitor. Rhea’s birdie on No. 18 concluded his round at 5-under-par (67), positioning himself in a tie for fourth as he posted his lowest round of the season.

Shiso Go (Kanagawa, Japan) carded a 2-under-par (70) in his opening round. Go, who is known for his dominating play at Blackthorn Club, tallied his first birdie of the day on No. 5 to move to 1-under-par. However, back-to-back bogeys on No. 7 and No. 8 forced the ETSU junior to make the turn at 1-over-par (37). Go wasted no time in gaining those bogeys back, carding birdies on a pair of par-4s in No. 11 and No. 13 to move back to red figures. Following four consecutive pars, Go concluded his round with a birdie of his own on No. 18 just minutes before Rhea. Go, known for his heroics on No. 18 a year ago, drained a lengthy birdie putt from the left side of the green to move to 2-under-par (70) to sit in a tie for 19th.

Archie Davies (Carlisle, England) and Trevor Hulbert (Orlando, Fla.) finished with a pair of even-par (72) rounds, positioned in a tie for 39th after day one. Davies was off to a bumpy start in his first three holes with three consecutive bogeys to fall to 3-over-par. However, the England native birdied No. 8, allowing him to make the turn at 2-over-par (38). With a birdie on No. 10 and No. 14, Davies was back to even par before a bogey on No. 15. Two holes later, Davies carded his third birdie on the back nine on No. 17 to climb back to even-par for his round.

Hulbert started his round off with five consecutive pars before a setback on No. 6 moved him to 1-over-par. The lone ETSU senior then moved into red figures with a birdie on No. 8 as he chipped in for eagle from off the back of the green. Hulbert’s eagle was one of only six eagles on the day and one of only two eagles on No. 8. Hulbert made the turn at 1-under-par (35), before a bogey on 12 pushed him back to even par. Hulbert would climb back into the red figures with a birdie on No. 15, before giving the stroke back on No. 17 to conclude his round at even-par.

Making his season debut as an individual for the Buccaneers was Austin Carter (Kingsport, Tenn.), finishing his round with an even-par (72) score to join Davies and Hulbert in a tie for 39th. Carter started his round on the back nine with a bogey on 10. However, that did not phase the Tennessee junior as he posted three birdies in the next four holes to move to 2-under-par. Carter bogeyed No. 15 (hole 6), making the turn at 1-under-par (35). Following another bogey on No. 3 (hole 12), Carter came down the stretch with six consecutive pars to conclude his round with a 72 (E).

Tennessee is positioned atop the leaderboard after a 15-under-par (273) in the opening round. The Volunteers carded the fourth-lowest single-round score in the tournament’s history with a 273 in today’s event. Louisville (-14) sits one stroke behind the Volunteers, while Furman rounds out the top three teams with an opening-round 11-under-par (277).

NC State’s Benjamin Shipp is on top of the player leaderboard with an opening round of 7-under-par (65). Shipp opened the tournament with a field-best eight birdies in the first round, but bogeyed No. 8 for his only error on the day. Louisville’s John Murphy and UNC Wilmington’s Segundo Oliva Pinto are tied for second after an opening round of 6-under-par (66). Rhea trails the leader by two strokes and is tied for fourth (-5) with four other golfers, including Furman’s Keller Harper.