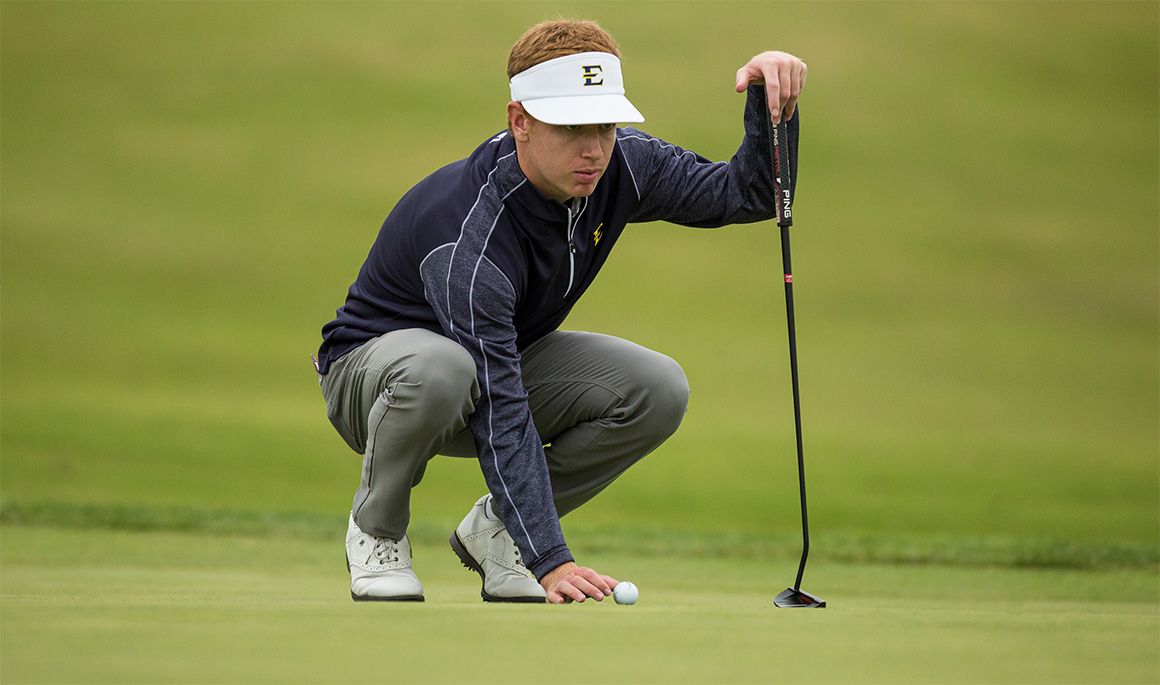 JONESBOROUGH, Tenn. (Oct. 12, 2019) – The ETSU Buccaneers Men’s Golf climbed five spots up the leaderboard following day two of the 2019 Bank of Tennessee Intercollegiate at the Blackthorn Club at the Ridges. The Bucs carded a tournament-record-tying 269 (-19) as a unit, tying Virginia’s mark set in 2016. With the second-round 269, the Bucs wiped away an 8-stroke deficit and turned the leaderboard around with a 2-stroke advantage over Tennessee with just 18 holes to play on Sunday.

Jack Rhea (Jonesborough, Tenn.) put on a display in front of the home crowd, finishing his second round with a 9-under-par 63. Rhea’s 63 was his lowest collegiate round and tied him with fellow teammate Shiso Go (2018, 2017) and Louisville’s Simon Zach (2018) for the lowest one-round scores in the tournament’s history. Rhea began the day just two strokes back of NC State’s Benjamin Shipp, but his 9-under-par round allowed the Tennessee junior to jump comfortably into first place with a six-stroke lead and a 14-under-par overall score. With a birdie on hole No. 1 and No. 4 and a bogey on No. 3, Rhea made the turn with a modest 1-under-par (35) front nine. That is when the script flipped for Rhea and he caught fire. For the second consecutive day, Rhea birdied holes No. 10 and 11 before a par on hole No. 12. The Jonesborough native then went 5-under-par over the next four holes with an eagle on No. 14 to climb into first on the leaderboard. Rhea capped off his round with a lengthy birdie putt on No. 18 to jump into the record books and card an 8-under-par (28) back nine.

The biggest improvement on the leaderboard came from freshman Archie Davies (Carlisle, England) who jumped 35 spots into a tie for fourth place following his bogey-free round of 7-under-par (65). Davies jumped off to a hot start with back-to-back birdies on hole No. 1 and 2, putting Friday’s three-straight bogeys start behind him. Davies then birdied No. 8 following five consecutive pars, making the turn at 3-under-par 33. Davies record birdies on holes No. 11 and the par-5 14th to improve to 5-under-par for the day. The England native nearly holed out from the bunker on hole No. 16, having to settle for a tap-in par as his bunker attempt lipped out. Davies rode the momentum for consecutive birdies on holes No. 17 and 18 to conclude his round with a 65 (-7), sitting in fourth-place at 7-under-par for the tournament.

Shiso Go (Kanagawa, Japan) finished his second round with a 4-under-par 68, jumping 11 spots up the leaderboard into a tie for 8th at 6-under-par (138). Go was off to a strong start, recording a 3-under-par score through the first six holes before a double-bogey setback occurred on the ninth hole. The Japan native found those two strokes with birdies on No. 11 and No. 12 and then gained a third birdie in four holes with a tap-in on No. 14. Go played the last four holes at even-par, capped off by his seventh birdie of the day on hole No. 18, his second consecutive round with a birdie on 18.

Trevor Hulbert (Orlando, Fla.) carded a 1-over-par 73 in the second round, dropping six spots in the player standings to 45th (+1). Hulbert began his day with five consecutive pars until a birdie on No. 6 pushed the senior into red figures. However, a double-bogey on No. 9 forced the Florida native to make the turn at 1-over-par (37). The lone ETSU senior finished even-par on the back nine with a birdie on No. 15, followed by a bogey on No. 16 to give the stroke right back to the course.

The Bucs sit atop the leaderboard at 26-under-par (550) and are two-strokes ahead of Tennessee (-24) and four shots ahead of Louisville (-22). ETSU’s second-round 269 ties a tournament record and allowed the Bucs to overcome an 8-stroke deficit after the first day of play. The tournament record for best three-round score by a team is held by Virginia who finished 35-under-par (829) in 2016.

Rhea made the jump up the leaderboard, turning a 2-stroke deficit into a 6-shot lead heading into the final day of play. Jackson Suber (-8) of Ole Miss and Benjamin Shipp (-8) of NC State are currently tied for second, while ETSU’s Davies (T4) and Go (T8) are also inside the Top 10. The best three-round score in tournament history belings to Hayden Buckley of Missouri set in 2017 when he carded a 17-under-par 199.

Rhea recorded one of the eight eagles on the day and one of just three eagles on hole No. 14. The Tennessee native now has the most birdies for the tournament with 14, is tied for the most eagles (1). Rhea also leads the field in par-4 scoring, averaging 3.60 shots per par-4 and is 8-under-par in such holes. The tournament leader is also tied for third in par-5 scoring, averaging 4.25 strokes per par 5 and is 6-under-par when playing the lengthy holes.

ETSU tees off at 10 a.m. in the final day of the Bank of Tennessee Intercollegiate. The Bucs will tee off on hole No. 1 and will be paired with the Volunteers and Cardinals.