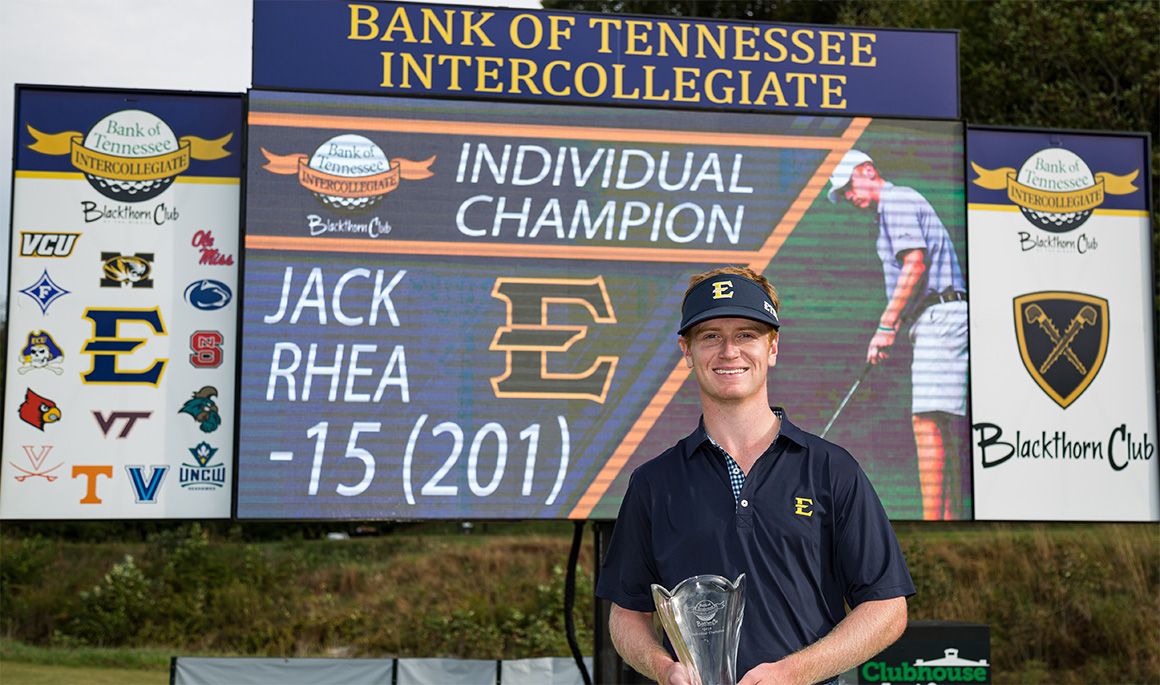 JONESBOROUGH, Tenn. (Oct. 13, 2019) – Despite not claiming the team championship, the ETSU Buccaneers received a boost from its hometown junior as Jack Rhea (Jonesborough, Tenn.) laid claim to his first-ever individual championship at the collegiate level. Rhea became just the third Buccaneer to win the Bank of Tennessee Intercollegiate individual championship and the first since Adrian Meronk did so back in 2015. Rhea finished the tournament at 15-under-par (201), tying 2018’s winner (Simon Zach) for the second-lowest three-round score in the tournament’s history.

The Bucs capped off the 2019 Bank of Tennessee Intercollegiate with a second-place finish of 29-under-par (835), falling to Louisville (-34) by five strokes in the overall board. This is the seventh time in the 22-year history that the Blue & Gold have placed Top 3 in the home tournament at the Blackthorn Club at the Ridges.

“I am really happy with the tournament and you always want to win,” stated head coach Jake Amos. “Under the circumstances of what happened this week with Sam getting injured and having to play the weekend with just four guys, I am delighted with second place. I don’t think it gets much better than the second-round effort that we put on yesterday. The guys knew that every shot they hit counts for the team and they handled the pressure really well. We got off to a good start today but then stumbled on the last 10 holes. If we played those holes better, we would have given Louisville a better shot. Ultimately having just four guys handcuffed us, but credit to Louisville for going out and winning the tournament. They are really deep from No. 1-5 and they will make an impact in the NCAA Tournament.”

“I am so proud of Jack’s progression these last 14 months. He has come so far since we have been working together. He is figuring out how to be great. He is freaky talented and he is coachable on the course. This is first of many for him and he could be dangerous as he continues to figure out how good he really is. He is a leader by example. Him being an ETSU guy born and raised, this is a great story to do it on his home course. Now we get ready for Georgia Tech and let’s take this momentum and do better.”

Jack Rhea entered the final round with a six-stroke advantage, eyeing the individual championship from the start of the round. Rhea was steady through the first seven holes, carding seven consecutive pars. The Jonesborough native then rolled in a birdie on No. 8, followed by a par on No. 9 to make the turn at 1-under-par (35). Rhea distanced himself further from the field with birdies on No. 10 and No. 14 to move to 3-under-par. However, Rhea finished 2-over-par in the final four holes, with bogeys on No. 15 and the closing hole 18. The Tennessee native finished with an even-par back nine, carding a final round of 1-under-par 71. Rhea’s victory was never in doubt as the ETSU junior hoisted the trophy with ease as the 2019 Individual Champion of the Bank of Tennessee Intercollegiate. Rhea finished the week with an impressive 17 birdies and just four bogeys, paving his way to the top.

Shiso Go (Kanagawa, Japan) recorded the lowest round of the day for the Buccaneers with a 3-under-par (69) effort. The junior from Japan scorched the course in the first eight holes with four birdies, including back-to-back birdies on No. 4 and No. 5. Go finished the front nine with a bogey on No. 9, turning at 3-under-par (33). Despite a bogey on No. 12., Go kept his foot on the gas with consecutive birdies on No. 13 and No. 14 to move to 4-under-par for the second time on the day. The ETSU competitor carded three consecutive pars from No. 15-17 before a tough approach on No. 18 resulted in his third bogey of the day. Despite the bogey, Go finished with a 69 (-3), resulting in an 8th-place finish in the tournament, his best finish of the 2019 campaign.

Archie Davies (Carlisle, England) secured his first collegiate Top 10 finish on Sunday with a final round of even-par (72). Davies got off to a good start with a birdie on No. 1 before bogeys on No. 4 and No. 6 pushed him to 1-over-par. The freshman golfer maintained his composure in a critical Sunday, knocking in an eagle putt on No. 8, his only eagle of the week. Davies finished the front nine with a bang as he saved par from the fairway on No. 9, turning in a 1-under-par (35) on the front side. The England native would go on to slide to even-par with eight pars and one bogey on the back nine, resulting in a 7-under-par (209) tournament and a Top 10 placement.

Trevor Hulbert (Orlando, Fla.) was the final golfer to count for the Bucs, starting his round off with a lengthy birdie putt on No. 1. However, bogeys on No. 5 and No. 8 forced the lone senior to make the turn at 1-over-par (37). After a birdie on the par-5 14th hole, Hulbert relinquished the stroke with a bogey on the par-3 16th. The Florida native would finish with consecutive pars, carding a 1-over-par round of 73 and placing 47th in the field at 2-over-par (218).

Louisville claimed the team championship thanks in large part to a final round 12-under-par (276), the second-lowest final-round score in the tournament’s 22-year history. The Cardinals finished with a score of 34-under-par (830), one stroke shy of tying Virginia’s tournament record of 35-under-par (829) set in 2016. The Bucs placed second and were followed by Tennessee (-27), Ole Miss (-23) and UNC Wilmington (-21) to round out the top 5.

Rhea outlasted the competition on Sunday to win his first collegiate event, besting UNCW’s Segundo Oliva Pinto and NC State’s Benjamin Shipp. Pinto and Shipp both finished the tournament with a score of 13-under-par (203), as Pinto fired a final-round 65 (-7) which ties the tournament record for lowest final-round score. Louisville’s Jiri Zuska also carded a 7-under-par (65) in the final day.

The Bucs will be back in action on Friday, Oct. 18 when they travel to Alpharetta, Ga. to take part in the Golf Club of Georgia Collegiate. The event will run from Oct. 18-20 and will be hosted by Georgia Tech.