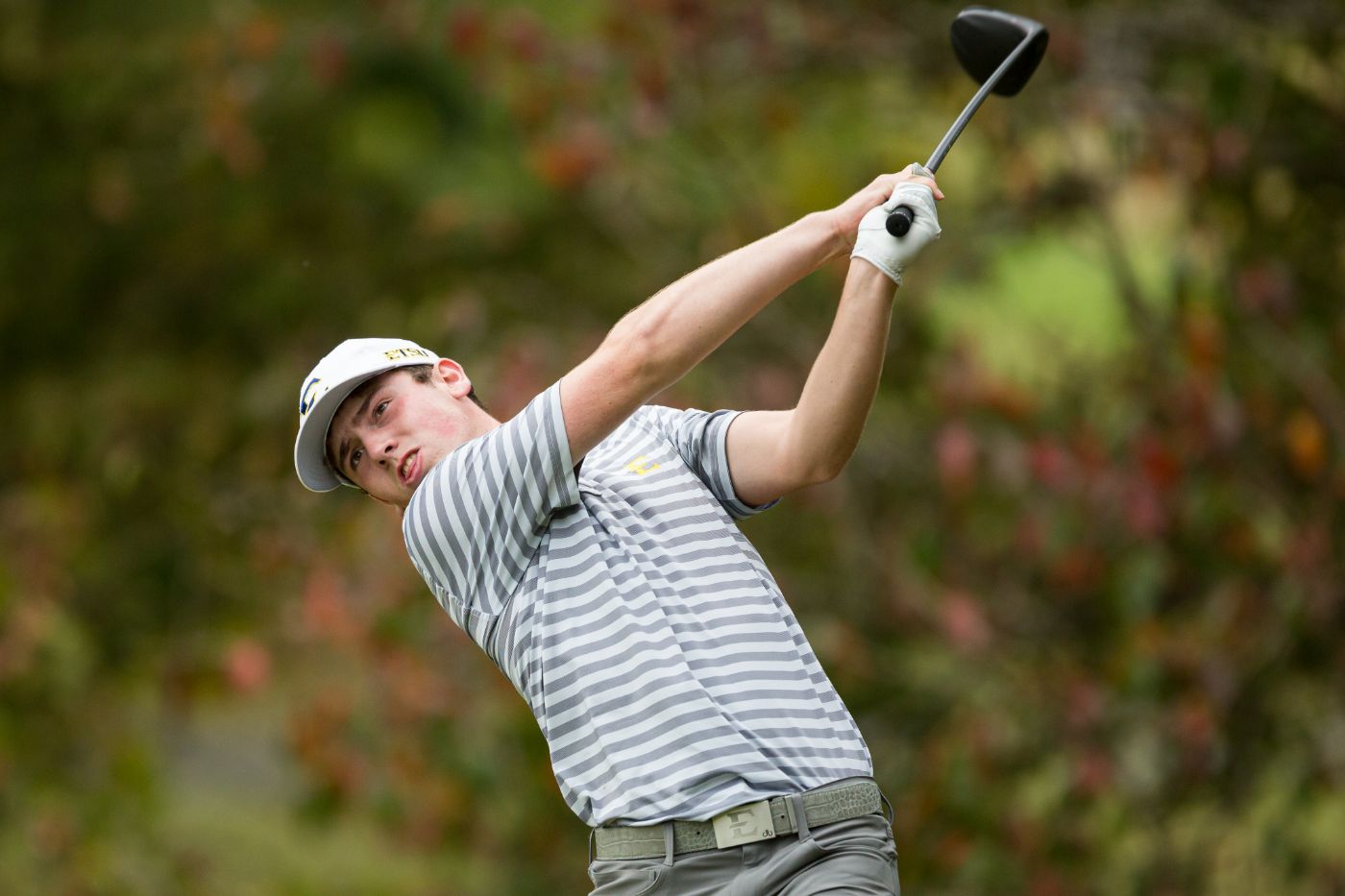 Bucs Unable to Pick up Ground on Field
Related Links

ALPHARETTA, Ga. (Oct. 19, 2019) – The ETSU Buccaneers men’s golf team had to weather both the golf course and the conditions on Saturday’s second round of the Golf Club of Georgia Collegiate. With steady rain and gusts of up to 23 miles per hour, ETSU posted a 13-over-par 301, falling to 11th overall in the field at 16-over-par. There were no team scores under par in the second round of the event.

Despite the team struggles, several individuals posted respectable scores in the conditions. Jack Rhea (Jonesborough, Tenn.) concluded his second round with a 1-over-par 73, falling to even par for the event and sitting in a tie for 13th. Rhea birdied the 11th hole to move into red figures early before a pair of double bogeys on No. 14 and No. 16 halted any momentum. After a bogey on No. 17, Rhea earned a stroke back on No. 18 with a birdie, making the turn at 3-over-par. Rhea’s final bogey came on hole No. 3, falling back to 4-over-par. However, the Tennessee native was determined to make a push, registering back-to-back birdies on No. 4 and No. 5. The ETSU junior finished his round with a birdie on No. 9 to cap off his round with a 2-under-back nine to finish with a 73 (+1).

Archie Davies (Carlisle, England) was right behind Rhea with a 2-over-par 74, falling to 2-over-par for the tournament. Davies carded a fairly quiet round compared to the field, with just two birdies, two bogeys and a double bogey. Davies’ first bogey in his round came on No. 12 before posting his two birdies on No. 14 and No. 17 to turn at 1-under-par. The England native started the back nine with a double bogey on the par-5 first hole before turning in five consecutive pars. Davies’ final bogey came on No. 7 as he wrapped up the back nine at 3-over-par.

The third-best round belonged to Austin Carter (Kingsport, Tenn.) as the junior golfer finished with a 3-over-par 75. Carter parred the first two holes before posting four bogeys and a birdie over the next five holes. The Tennessee native finished the front nine with a birdie on No. 18, making the turn at 2-over-par. Carter settled in on the back nine with four consecutive pars before he birdied the par-4 fifth hole to move to 1-over-par for the day. However, Carter bogeyed the next two holes followed by consecutive pars to conclude his second round with a 3-over-par score.

Shiso Go (Kanagawa, Japan) turned in the fourth-best score for the Bucs in the second round, posting a 7-over-par 79 to move to 7-over-par for the tournament. Go struggled on the front nine with five bogeys and a double bogey to post a (+7) 43. The Japan native settled in on the back nine, starting off with a birdie on hole No. 1. After four consecutive pars, Go bogeyed the sixth hole and rebounded back with a birdie on the par-4 eighth hole. The ETSU junior capped his round with a bogey on No. 9, finishing with an even-par back nine.

No team in the field carded an under-par round as Duke finished with the low round for the day at 3-over-par 291. The Blue Devils moved into first place and are the only team under par for the event at 1-under-par. Texas A&M sits three strokes behind Duke at 2-over-par for the event after carding a 4-over-par 292 second round. The third-placed team is UCLA, holding tight to a 4-over-par scorecard after a 7-over-par 295 second round. Pepperdine entered the second round with the lead after a 12-under-par 276 first round. The Waves fell three spots to a tie for fourth place with a 19-over-par 307 second round, the highest team score of the day.

Texas A&M’s William Paysse carded an even-par 72 in the second round, holding his position in the top slot of the individual leaderboard. Duke’s Adrien Pendaries jumped five spots into second place after a 1-under-par (71) second round, moving to 4-under-par for the tournament. There are two players tied for third in Eddy Lai (UCLA) and Evan Katz (Duke) at 3-under-par for the event. Lai carded the low-round for the day with a 3-under-par 69.

ETSU will conclude the 2019 Golf Club of Georgia Collegiate tomorrow, teeing off at 9:31 on hole No. 10. Trevor Hulbert will get the Bucs started off first, with the rest of the team teeing off in 11-minute increments. ETSU will be playing alongside host Georgia Tech and Southern California.