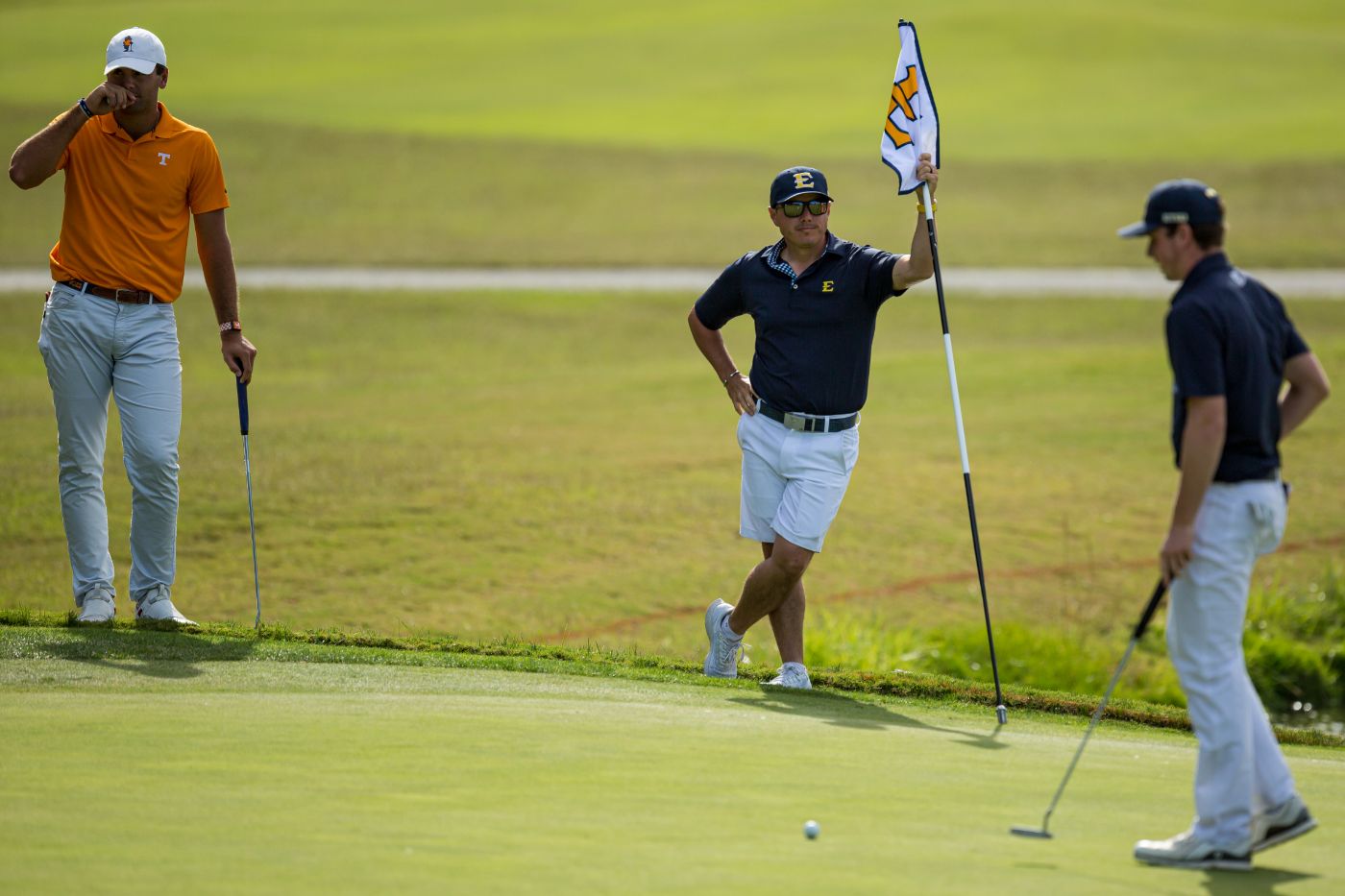 ETSU to Return to Team action in Tallahassee
Related Links

Bucs to partake in Seminole Intercollegiate

TALLAHASSEE, Fla. (Feb. 21, 2020) – After nearly a four-month break, the ETSU Men’s Golf team will return to team play on Saturday, Feb. 22 as the Bucs travel to Tallahassee, Fla. to take part in the Seminole Intercollegiate. The last time out as a team, the Bucs claimed the Hoakalei CC Collegiate Invitational in Oahu Island, Hawaii on Oct. 28-30.

About ETSU
ETSU will be competing in its first team event of the spring season after a strong fall campaign, entering the tournament as the 25th-ranked squad in the latest Golfstat Top 25. During the fall season, the Bucs captured three Top 3 finishes in five events, including claiming the title at the Hoakalei CC Collegiate Invitational on Oct. 28-30, carding a 29-under-par (835) to win by nine strokes over then-ranked No. 41 Mississippi. The Bucs also tied for second in the season opener at the Carpet Capital Collegiate and placed second in the home tournament at the Bank of Tennessee Intercollegiate.

Jack Rhea (Jonesborough, Tenn.) will lead the charge for the Bucs in the first Spring tournament. The junior golfer has finished inside the Top 10 in three events, including winning the Bank of Tennessee Intercollegiate, hosted by ETSU. Rhea carded the lowest round in the Golfstat era for ETSU with a second round 63 (-9) which is also the lowest round to par in the Golfstat era. Rhea is currently averaging a -1.13 versus par score through 15 rounds, placing him third in ETSU history for score to par in a single season. The Jonesborough native is also 28th in the Golfstat individual rankings and is in the running for the USA Palmer Cup Watch List.

Archie Davies (Carlisle, England) and Shiso Go (Kanagawa, Japan) have been interchangeable at the No. 2 and No. 3 positions for the Bucs. Go will begin the tournament in the No. 2 spot and currently ranks 83rd in the Golfstat rankings. Like Rhea, Go has also finished inside the Top 10 on three occasions in the fall while winning one event. The Japan native won the inaugural Hoakalei CC Collegiate Invitational with a 14-under-par (202) and looks to build off that finish in Hawaii. Meanwhile, Davies enters his first spring season as a freshman and has one Top 10 finish under his belt, doing so with a 10th-place finish at the Bank of Tennessee Intercollegiate. Davies’ low round of the season was a bogey-free 65 in the second round of the ETSU home event, allowing Davies to set up for the Top 10 placement. The England native currently ranks No. 115 in the latest Golfstat rankings, sitting 11th among freshman in the NCAA.

Trevor Hulbert (Orlando, Fla.) will start in the No. 4 spot and is coming off his best finish of the season in Hawaii, finishing in a tie for 19th at the Hoakalei CC Collegiate Invitational with a two-under-par (214). Hulbert is the lone senior on the squad and his lowest round of the fall came in Hawaii with a second-round 69 (-3).

Samuel Espinosa (Pedrena, Spain) will be making his second appearance of the month. The Spain freshman competed in the Georgia Southern Individual Collegiate on Feb. 2-3, finishing in a tie for ninth with a one-over-par (217). Espinosa carded back-to-back rounds of one-under-par (71) in the opening rounds before finishing the event with a three-over-par (75).

The final competitor for the Bucs will be Austin Carter (Kingsport, Tenn.), competing as an individual. Carter is coming off a T25 finish at the Georgia Southern Individual Collegiate with a nine-over-par (225).

About the Tournament
This weekend will mark the 44th Seminole Intercollegiate event, a tournament that began in 1969-70. The format will be a 36-hole opening day with a shotgun start at 8:00 a.m. followed by continuous play for the second round. The final round of the event will be on Sunday with the tee time starting at 7:30 a.m. at hole No. 1.

The tournament will be held at the Golden Eagle Country Club for the third consecutive year. Golden Eagle has hosted the event before and was also the host of an NCAA regional event in 2013.

A Tom Fazio design, Golden Eagle was rated as “the most challenging course in Florida” by the United States Golf Association just six months after it opened in December 1986. Golfweek Magazine ranked Golden Eagle among the top 50 real-estate development courses in the Southeast.

The track features wide fairways and strategically placed Scottish bunkers to create a challenging yet playable layout for both casual and competitive golfers.

The Field
The tournament will feature a 14-team field, ranging from East Coast teams to West Coast competitors. There are eight teams found inside the Top 100 in the Golfstat rankings, including seven inside the Top 50. The Bucs are the second highest ranked team (No. 25), trailing only Washington who is ranked No. 17.

The Seminole Intercollegiate features 19 players inside the Top 250 in the latest Golfstat rankings, including eight inside the Top 100. The highest ranked golfer competing is Florida State’s John Pak, ranked No. 9 overall. ETSU’s Jack Rhea is the second-highest ranked competitor in the field (No. 28), followed by Florida State’s Jamie Li (No. 49).

The Bucs will be paired up with Washington and Florida State in the opening round, teeing off on holes No. 1-4.