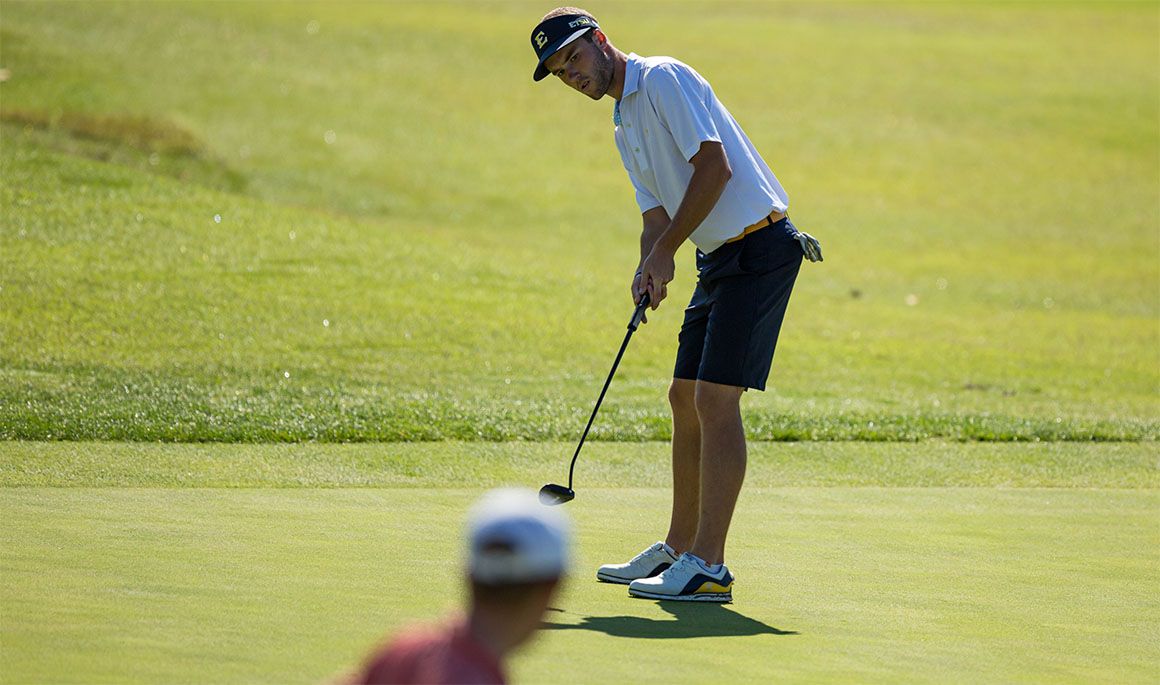 Espinosa and Hulbert leading the charge

MYRTLE BEACH, S.C. (March 9, 2020) – The first two rounds of the General Hackler Championship are in the books and the ETSU Buccaneers Men’s Golf team is tied for fourth place at 1-under-par for the event. The Bucs are tied with North Carolina State, while trailing No. 35 Liberty (-5), No. 7 Wake Forest (-7) and No. 26 North Carolina (-12).

ETSU began the day with a 3-over-par (291) round, concluding the opening round of the tournament in a tie for sixth with the host team Coastal Carolina. The Bucs then bounced back with a second-round score of 4-under-par (284), climbing two spots up the leaderboard into a tie for fourth overall with the Wolfpack.

Sam Espinosa (Pedrena, Spain) and Trevor Hulbert (Orlando, Fla.) are leading the way for the Bucs through the first two rounds as both are currently tied in 15th at 1-under-par (143).

Hulbert carded the low round for the Bucs in the opening 18 holes of play. Beginning on hole No. 1, the Florida native posted a 1-over-par (37) front-nine score, highlighted by his one birdie on the par-3 fifth hole. The ETSU senior then caught fire on the back nine, registering two birdies in his first four holes with one bogey in between. With a score of even-par heading into the final three holes, Hulbert finished 1-under-par with two more birdies and a bogey. Hulbert’s second round was more stable despite finishing with an even-par (72) score. The Florida native collected two birdies, two bogeys and 14 pars, finishing with a bogey-free 1-under-par (35) back nine.

Espinosa registered a methodical opening round, finishing with 17 pars and just one bogey for a first-round score of 1-over-par (73). The ETSU freshman then jumped 16 spots up the leaderboard following his second-round score of 2-under-par (70), tying his best score in his young collegiate career. Espinosa dominated the front nine in his second round, tallying four birdies. Espinosa began the round with a birdie on No. 1, followed by a bogey on No. 2. Following three consecutive pars, Espinosa got into a groove with three consecutive birdies to quickly jump to 3-under-par for the round. The Spain native played the final 10 holes at 1-over-par, finishing with nine birdies and one bogey to turn in a 70 (-2) in the second round and jumping from 31 to 15 on the leaderboard.

Shiso Go (Kanagawa, Japan) is one stroke behind Espinosa and Hulbert, currently sitting in a seven-way tie for 19th overall. The Japan native posted back-to-back even-par (72) rounds to sit third on the roster for the Bucs. Go began his day with two birdies and two bogeys on the front nine, making the turn at even-par (36). The Japan native then dropped to 1-over-par following a bogey on No. 11 before recording a birdie on No. 13 to get back to even par for his round. Go’s second round featured four birdies, four bogeys and 10 pars for another even-par round. In his second round, Go never dropped below 1-over-par, nor did he ever advance beyond 1-under-par.

Jack Rhea (Jonesborough, Tenn.) has the fourth-best team score for ETSU following the first two rounds, currently sitting in a tie for 48th at 5-over-par (149). The ETSU junior was off to a shaky start in the first round, finishing 7-over-par (79) with just two birdies. Rhea was back to normal in the second round, getting off to a 2-under-par start through the first eight holes. Rhea played the final 10 holes at even par with two birdies, two bogeys and six pars.

Austin Carter (Kingsport, Tenn.) is playing as an individual for ETSU and is positioned in a five-way tie for 39th overall with a score of 3-over-par (147). Carter tallied a 5-over-par (77) opening round with just one birdie before responding with a 2-under-par (70) second round. The second round 70 was Carter’s lowest round of the season and his first round below par on the year.

North Carolina leads the field at 12-under-par (564), paced by an opening round score of 8-under-par (280). The Tar Heels are followed by fellow ACC foe, Wake Forest, sitting in second with a score of 7-under-par (569). The Flames of Liberty are sitting alone in third with a team score of 5-under-par (571). Fellow Southern Conference foe UNCG is positioned in 12th with a score of 14-over-par (590).

Coastal Carolina’s Zack Taylor leads all individuals with a score of 10-under-par (134), anchored by an opening round score of 6-under-par (66). There is a three-way tie for second between Eric Bae of Wake Forest, Jonathan Brightwell of UNCG and Benjamin Shipp of N.C. State. All three competitors are 6-under-par.

ETSU will close out the General Hackler Championship tomorrow in the second wave of tee times beginning at 8:30 a.m. on hole No. 1. The Bucs will be paired with N.C. State and Kent State.