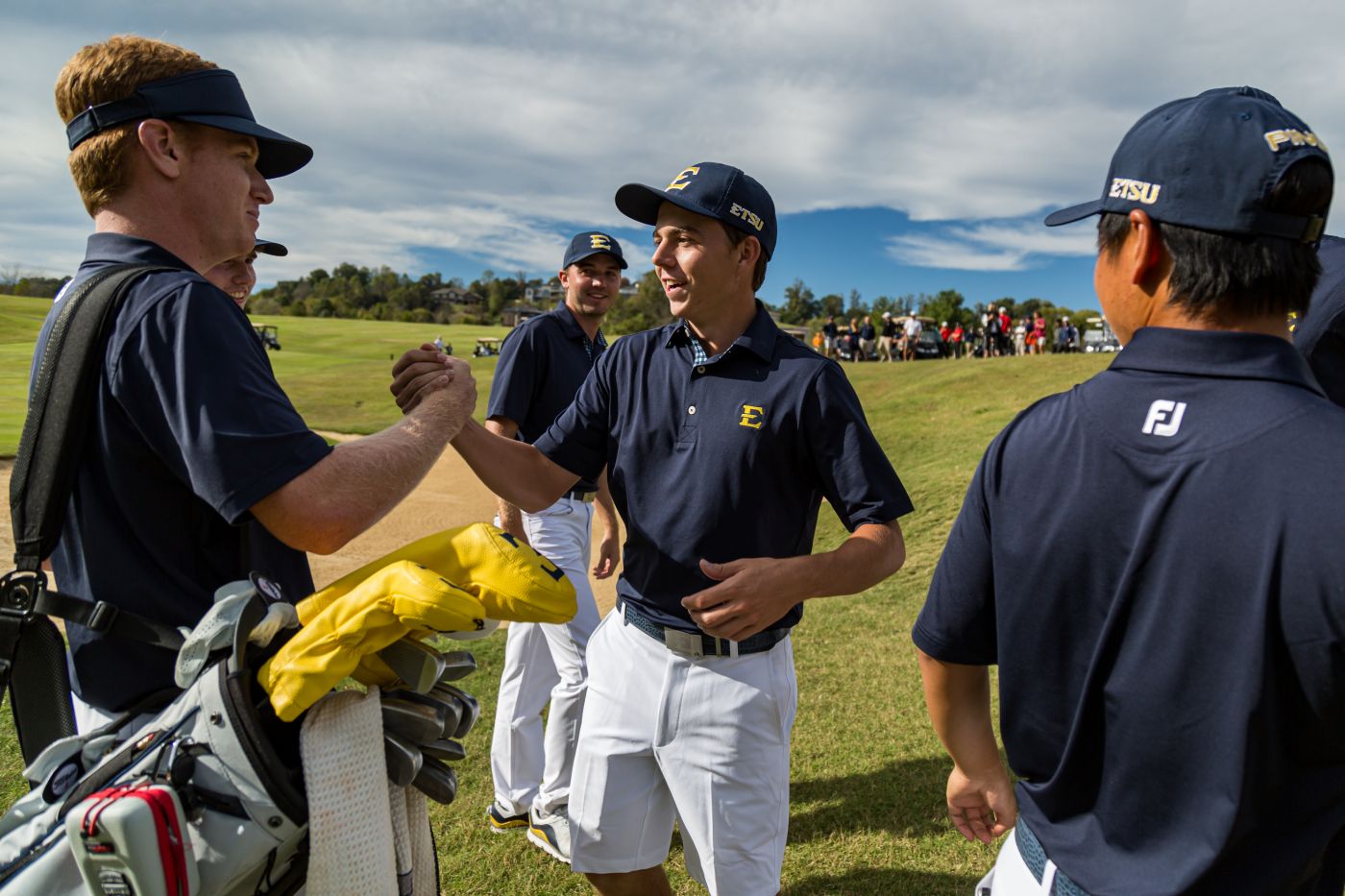 JOHNSON CITY, Tenn. (May 12, 2020) – Despite the 2019-20 season coming to an abrupt halt due to the COVID-19 pandemic, the ETSU Men’s Golf team enjoyed success and strong results during the shortened campaign.

The Bucs finished the season ranked No. 26 in the Golfstat team rankings and capped off the season with one team win and two individual titles, while also finishing runner-up as a team in three different tournaments. Jack Rhea (Jonesborough, Tenn.) and Shiso Go (Kanagawa, Japan) were named to the PING Division I East All-Region team, while Rhea was tabbed to the PING All-American Honorable Mention team.

“Overall, cracking the top 25 as a team and having an All-American, I couldn’t have asked for a better first year as head coach,” stated head coach Jake Amos. “We won as a team and had two individual winners in the fall, which set the tone for the season and built a lot of confidence in this group. We had a long break in the off season and came out of it sharper than expected and finished 2nd and 4th in our first 2 events of the spring. I think we were starting to get some real momentum, with all five of our starters playing well. I am delighted with how we played and the consistency we showed this season. We achieved a lot of our team and personal goals already with only two thirds of the season gone which was great but we had a lot more in the tank.”

Bucs Jump out to Strong Start
ETSU began the season at the Carpet Capital Collegiate in Rocky Face, Ga., finishing tied for second in the field at 17-over-par (881). This would be the first of four top-2 finishes in just seven events for ETSU. The Blue & Gold put away four SEC foes: South Carolina, Alabama, Tennessee and Florida; while also topping ACC competitors Clemson and Virginia.

Jack Rhea and Shiso Go jumped out to their first Top-10 result of the season, finishing tied for ninth with a final score of 1-over-par (217).

Feels Good to Be Home
ETSU’s annual event, the Bank of Tennessee Intercollegiate, did not disappoint. The Bucs placed second in the field, only behind Louisville who edged out ETSU by five strokes. The home squad corralled a score of 29-under-par (835), using just four golfers in the tournament as Sam Espinosa (Pedrena, Spain) had to withdraw in the opening round with a back injury.

Using just four golfers, ETSU recorded a second-round score of 269 (-19), tying Virginia’s second round in 2016 as the lowest single round scores in Bank of Tennessee Intercollegiate history.

ETSU’s second-place finish was aided by two other Buccaneers who finished inside the Top-10 as Go place eighth with a score of 9-under-par (207) and freshman Archie Davies (Carlisle, England) tallied his first collegiate Top-10 finish with a score of 7-under-par (209). Davies also recorded a bogey-free round of 65 (-7) in the second round, catapulting up the leaderboard.

Victorious in Hawaii
The Bucs capped off the fall season with a dominating win in Oahu, Hawaii, claiming the inaugural Hoakalei CC Collegiate Invitational by the final score of 29-under-par (835), topping Ole Miss by nine strokes and getting revenge on Louisville who finished third, 10 shots behind the Bucs.

This time it would be Shiso Go who carried the torch for the Bucs in Hawaii, claiming his second career individual title following a 14-under-par (202) performance. Go raced out to a 6-under-par (66) in the opening round, followed by a tournament best 2-under-par (70) in the second frame. The Japan native then polished off his victory with a score of 6-under-par (66) in the final round for the victory.

Joining Go inside the Top-10 was Rhea, his third Top-10 finish in five tournaments. The Jonesborough, Tenn. native finished tied for ninth with an overall score of 6-under-par (210), including topping Go by one stroke in the final round with a score of 7-under-par (65).

Second at the Seminole Intercollegiate
The next-to-last tournament yielded yet another second-place finish for the Buccaneers as ETSU carded a tournament score of 2-under-par (862), finishing seven strokes behind Washington. ETSU was led by Rhea, his fourth Top-10 finish of the season. The junior finished the tournament tied for fifth with a score of 1-under-par (215), aided by a final round of 3-under-par (69). Joining Rhea inside the Top-10 was Davies who finished in a tie for ninth, his best collegiate finish. The England native used a final round 68 (-4) to jump up the ladder into the Top 10 with a tournament score of 1-over-par (217).

Looking Forward
“I think what we achieved in such a small amount of time this season really bodes well for the future of this team,” commented Coach Amos. “The main thing I’m looking forward to next season is the expectations and goals having changed for this team, the standard has been raised and everyone expects to win every time. That’s a credit to the upperclassmen on creating that culture. We have everyone coming back and are adding three new freshmen. It’s going to be competitive and I can’t wait to see how far that can push everyone to get better.”

Final Season Stat Leaders
Below is a condensed breakdown of ETSU’s top performers in select categories. You can find a tournament-by-tournament rundown for each student-athlete by clicking on the following PDF link.