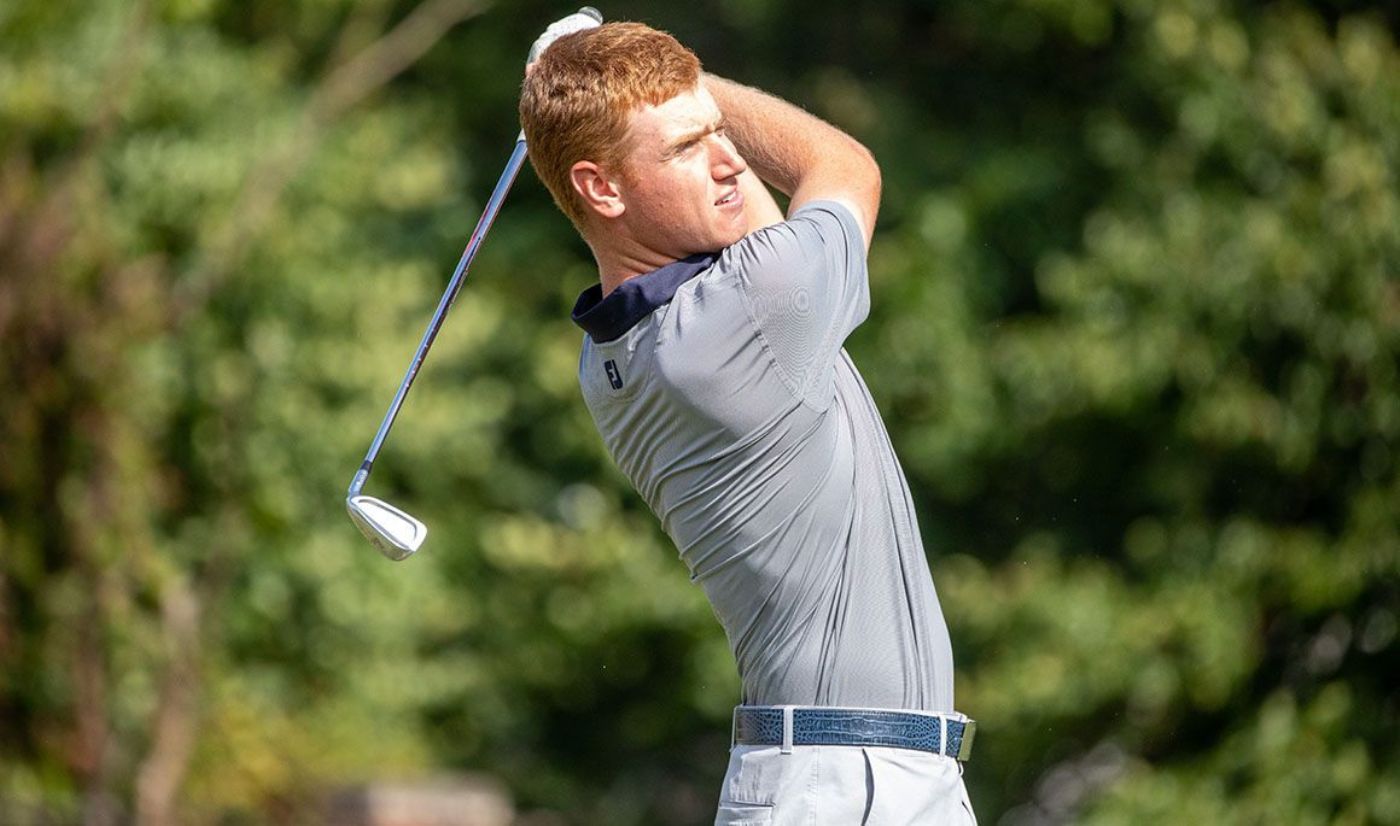 OOLTEWAH, Tenn. (Sept. 21, 2020) – Taking part in its first competition since March, the ETSU Buccaneers Men’s Golf team is positioned comfortably in third place at 18-over-par following the first two rounds of the 2020 Scenic City Collegiate in Ooltewah, Tenn. The Bucs played 36 holes of golf in the opening day, beginning with a shotgun start at 8 a.m. and rolling straight into the second round.

ETSU was rusty out of the gate at The Honors Course, carding an opening-round score of 19-over-par (307) before returning to form with a 20-stroke improvement in the second round, finishing 1-under-par (287) as a unit. The Bucs currently sit just three shots back of first place, held by UAB and Little Rock at 15-over-par. The Bucs’ 1-under-par second round was the only below-par score from the field, besting host Chattanooga by three strokes.

The Bucs were led in the first day by Jack Rhea (Jonesborough, Tenn.) who currently sits tied for 3rd at 1-over-par (145). Rhea began his day on hole No. 2, alternating between pars and bogeys through the first eight holes before earning his first birdie of the season on the par-4 10th hole. The Tennessee native finished his first round with a score of 4-over-par (76) with two birdies in the round. The senior leader then kicked off the second round in convincing fashion with an eagle on the par-5 second hole. Rhea was able to turn in a 3-under-par front nine to turn the table on the leaderboard. The Jonesborough product then wrapped up the final nine at even-par, jumping 11 spots into a tie for 3rd at 1-over-par.

The second-best score for the squad belongs to Archie Davies (Carlisle, England), tied for 12th with a score of 5-over-par (149). Davies struggled out of the gate in the opening round, starting 6-over-par in his first six holes. However, the English freshman settled down to birdie three of the next six frames. Davies concluded his first round of the season at 4-over-par, tied for 14th. The ETSU sophomore climbed two spots up the leaderboard following the second round after a methodical 1-over-par (73). Davies finished with two birdies and three bogeys in the second 18 holes of the day.

Trevor Hulbert (Orlando, Fla.) started much like Davies, 6-over-par through the first six holes of play. The Florida native earned his first two birdies of the season on holes No. 11 and 13 to move to 4-over-par. Hulbert played the final seven holes at 1-over-par to cap off a season-opening 5-over-par (77) first round. Just like Davies, Hulbert rebounded in the second round, posting a 1-over-par (73) and jumping three spots into a tie for 15th at 6-over-par (150). The ETSU graduate student shook off an early double bogey in his second round to play the final 16 holes at 1-under-par.

Shiso Go (Kanagawa, Japan) did not start the 2020 season the way the senior envisioned, disqualifying himself from the individual leaderboard following round one. Go signed an incorrect scorecard following the opening 18 holes, taking himself out of contention for the individual title. However, the veteran golfer is still able to aid the Bucs as his scores from round two and three will count towards the team total. Go helped the Bucs climb up the leaderboard in round two with an even-par score of 72. The Japan native carded four birdies and four bogeys in the second round for the Blue & Gold.

Making their ETSU debuts were Remi Chartier (Montreal, Canada) and Campbell Wolf (Mechanicsburg, Pa.). The duo is currently tied for 24th at 9-over-par (153). Wolf had the low round between the two teammates in the first round with 6-over-par (78), while Chartier rebounded with an impressive 1-over-par (73) in the second round, featuring four birdies.

UAB and Little Rock sit atop the team leaderboard at 15-over-par (591), followed closely by the lads in Blue & Gold. ETSU leads all Southern Conference teams in the field, including: Chattanooga (+22), Western Carolina (+53) and Mercer (+65).

Dalton State’s Ben Rebne leads the individual field as one of just two players currently under par. Rebne, an NAIA competitor, posted a 2-under-par (142) opening day. The Mocs’ A.J. Lintunen is second on the board at 1-under-par (143). Third place belongs to both Rhea and Little Rock’s Logan Pate at 1-over-par (145). Pate turned in the low round of the day in the second round with a 5-under-par (67).

ETSU will be back in action for the final round at The Honors Course tomorrow morning. Tee times will begin at 8 a.m. with staggered tees on holes No. 1 and No. 10. The final round coverage will be on ESPN3 beginning at 12:30 p.m. and will only feature holes No. 16-18.