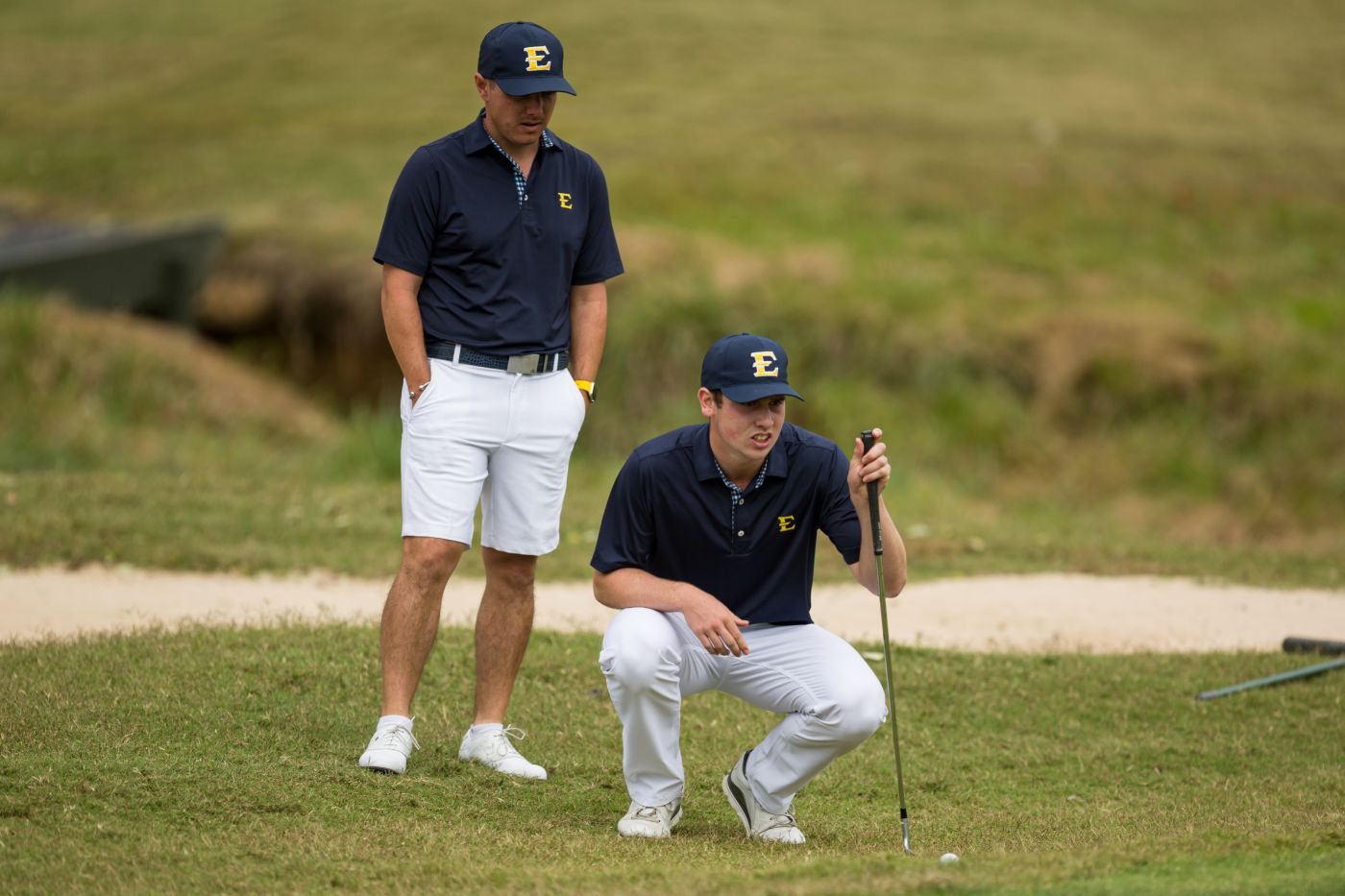 WESTLAKE VILLAGE, Calif. (Jan. 26, 2021) – Day two proved to be moving day in the field as the weather was prime for low rounds ahead of the weather coming in for Wednesday’s final round. The ETSU Men’s Golf team saw a 12-shot improvement from yesterday’s opening round, carding a 5-over-par (293), however sliding two spots on the leaderboard into solo ninth.

The low round of the day for the Bucs belonged to Archie Davies (Carlisle, England) who turned in a 1-under-par (71). Davies advanced five spots on the leaderboard into a tie for 23rd at 4-over-par (148). Beginning on the back nine, Davies found his first of four birdies on the par-5 12th hole. However, the England sophomore carded bogeys in two of the next three holes to fall to 1-over-par. Davies birdied the par-3 17th hole to make the turn at even par. The ETSU sophomore registered two birdies in the next six holes to climb into red figures at 2-under-par. However, Davies tallied one more blemish on his scorecard, a bogey on the par-3 8th hole to drop back to 1-under-par for the round.

Shiso Go (Kanagawa, Japan) had a good turnaround from day one as he finished his second round at even-par (72), jumping two spots into a tie for 26th. Go began his round on fire, 4-under-par through four holes thanks to a pair of birdies and one eagle. However, a pair of double bogeys in the next five holes brought his mark back to even-par at the turn. The Japan native clawed back to red figures after another bogey on the par-4 second hole with birdies on No. 4 and No. 6. Go finished his round with a bogey on his final hole, the par-4 9th to slide back to even-par for the day.

It proved to be a tale of two nines for ETSU’s individual leader Trevor Hulbert (Orlando, Fla.). The redshirt-senior concluded his second round at 1-over-par (73) to sit in a three-way tie for 12th at 1-over-par for the event. Hulbert carded a flawless opening nine holes, starting on the back nine, with a birdie on the par-5 12th hole and an eagle three holes later on the par-5 15th that saw him climb into solo second place. However, the steam disappeared for the Florida native, recording four bogeys in his final eight holes to slide down the leaderboard with 18 holes to play.

The final score for the Bucs was carded by Remi Chartier (Montreal, Canada), turning in a 5-over-par (77) second round. Chartier was slow to get going early, tallying a double bogey and bogey in his first two holes. However, a birdie on the par-5 12th hole calmed the storm for the redshirt-freshman. Chartier ended up making the turn with a 4-over-par (40) in the opening nine holes. The Canada product tallied a more methodical final nine with two bogeys and one birdie on the par-5 6th hole to shoot 1-over-par (37) in his last nine holes of the day.

Arizona State (-2) distanced themselves on the leaderboard, turning a one-stroke lead from day one into a five-shot advantage after posting a score of 282 (-6). The Sun Devils are five strokes ahead of Louisville (+3), while holding a seven-shot advantage over both San Diego State and SMU who are tied for 3rd at 5-over-par. Host, Pepperdine, climbed into the Top-5 with an 11-under-par (277) second round, currently sitting at 9-over-par in the Waves’ home tournament.

ETSU will conclude the 2021 Southwestern Invitational tomorrow afternoon. Tee times have not been set due to inclement weather expected in the area for the final round. For tee times, please follow along on Twitter at @ETSU_MGolf. Live video coverage of the final round will begin on the Golf Channel at 4:30 p.m. (ET) and will run until 7:30 p.m. (ET).