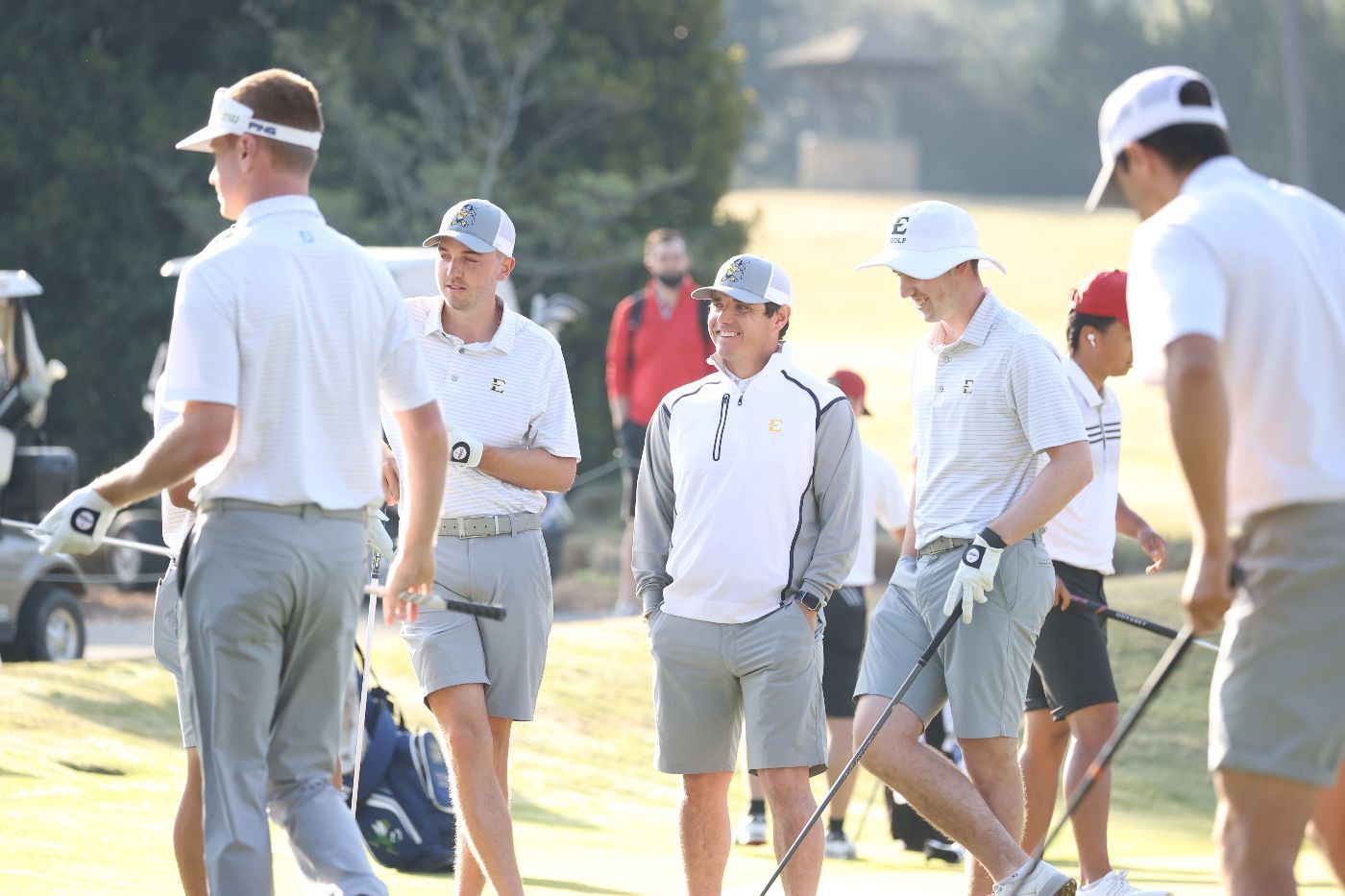 GREENSBORO, Ga. (April 18, 2021) – The ETSU Men’s Golf team has officially arrived in the Peach State as the Bucs are set to compete in the 2021 Southern Conference Championship at Reynolds Lake Oconee in Greensboro, Ga. The Bucs are looking for their 21st SoCon Championship in program history and the first since 2017.

Buc Nation
The Bucs are fresh off their best finish of the spring season, finishing third in the 2021 Stitch Intercollegiate in Cary, N.C. ETSU received a big boost from Archie Davies (Carlisle, England) who finished T-7th in the field, as well as Trevort Hulbert (Orlando, Fla.) who placed T-11th. ETSU concluded the event with a team score of 38-under-par (826), a new 54-hole program record for the ETSU Men’s Golf program. The record was thanks in large part to a final-round 18-under-par (270) which ranks T-3rd lowest single round score in program history, while marking the T-2nd lowest round vs. par in school history. All five Buccaneer competitors carded season-low 54-hole totals in the tournament.

ETSU will be led into the SoCon Championship by the duo of Davies and Hulbert. The redshirt-freshman is fourth in the league in scoring average, finishing 72.5 strokes per round. Davies has three top-10 finishes this season, including back-to-back top-10 placements. Hulbert currently ranks sixth in the SoCon in scoring average (72.7), finishing inside the top-10 in three different tournaments.

Shiso Go (Kanagawa, Japan), Jack Rhea (Jonesborough, Tenn.) and Remi Chartier (Montreal, Canada) will round out the lineup for the Bucs. Go (16th) and Rhea (T-25th) are coming off their best finishes of the season, while Chartier tied his career-best finish with a 27th-place finish in Cary.

About the Tournament
The 2021 Southern Conference Championship will be played at Reynolds Lake Oconee (The Oconee Course) for the first time in SoCon history. The tournament will be played over a two-day span with 36 holes to be played on Monday and 18 holes on Tuesday. Tee times will begin at 9 a.m. as the field will be playing in twosomes, teeing off on holes No. 1 and No. 10.

The Oconee Course is a Rees Jones design and was created to give the golfer a true risk/reward play, forcing golfers to choose between direct tee shots and long drives down tree-lined doglegged fairways.

The Field
The Bucs will be going toe-to-toe with the remaining SoCon squads, including reigning (2019) league champion, UNCG. ETSU (No. 50) and Furman (No. 81) are the only two SoCon programs ranked inside the Top-100 in the latest GolfStat rankings.

Furman's Keller Harper is the highest-ranked golfer in the field, coming in at No. 111. Davies is not too far behind Harper, ranking No. 131 in the latest rankings. Harper leads the league in scoring average (70.8), while Wofford’s duo of Ryan Marter (71.4) and Matthew Copeland (72.5) are second and third in the conference.