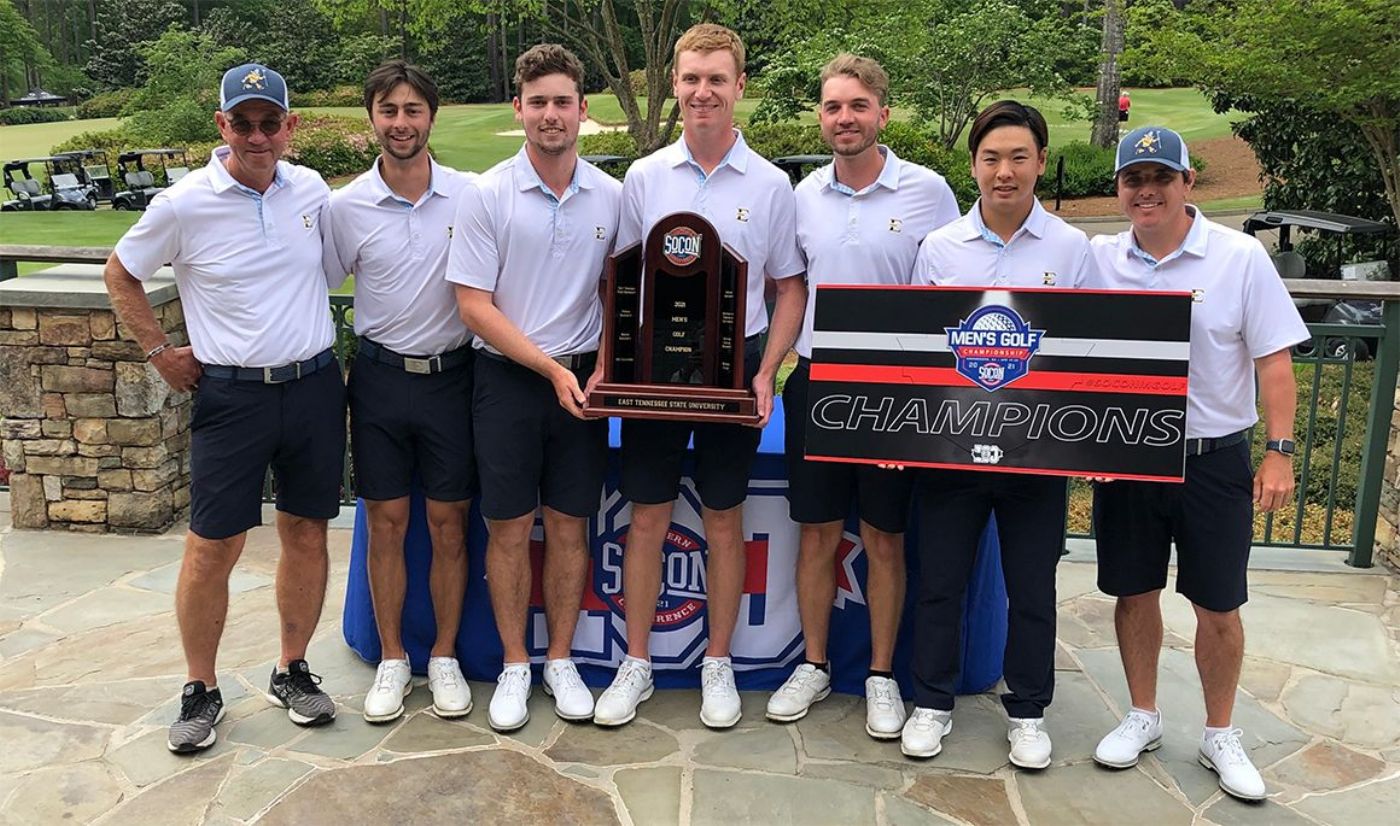 GREENSBORO, Ga. (April 20, 2021) – The wait is over and the Bucs are on top of the Southern Conference yet again! ETSU Men’s Golf went wire-to-wire in the 2021 SoCon Championship at The Oconee Course in Greensboro, Ga., claiming the program’s 21st SoCon Championship and 26th conference title in ETSU history. The Bucs (-5) fended off Western Carolina (+3) for their first title since 2017 and the first in the Jake Amos era.

“Our guys were in control the whole time and did a professional job getting the win,” stated Coach Amos. “It was tough on the back nine and we did what we had to do in order to win. I’m proud of them for handling the fact that they were favorites coming into the event and embracing the pressure all week. It was a great win to start our postseason play.”

ETSU redshirt-freshman Archie Davies (Carlisle, England) proved that he is here to stay, claiming the individual medalist honors with a tournament score of 9-under-par (207), his first collegiate victory.

“Archie has turned into a leader on this team,” added Coach Amos. “He had a slow start to the year, over the winter break he worked hard and came back to campus so much better. He’s solidified himself as our number one player and show up every week. He’s been knocking on the door for a win all spring, so it was only a matter of time. He plays golf like a 35-year-old veteran. I know this was one of his main goals this season to win but also to win the conference as a team. So, he is delighted to have achieved both.”

Davies put together a final-round score of even-par (72), holding off Western Carolina’s Louis Theys (-6) by three strokes. The England native started out on fire with four birdies in his first seven holes, eyeing down a tournament record. However, Davies finished 4-over-par in his final 11 holes of play, making the final player leaderboard closer than it truly was. The England product led the field in par-4 scoring (-3) and par-5 scoring (-8), while also leading the field in total birdies with 16. Davies is the first ETSU freshman to win the individual medalist honors at the conference championship since Seamus Power did so in the 2007 ASUN Championship. With his individual title, Davies represents the 19th time that the Bucs claimed both the team trophy and the individual podium at the conference championship, including the 15th time in the SoCon. Davies is now the 16th Buccaneer to win individual honors at the SoCon Championship and 24th overall conference victor in program history.

In his final SoCon Championship appearance, Trevor Hulbert (Orlando, Fla.) put together his third Top-5 finish in the event for his career. It was not the final round that he would have liked as Hulbert finished 5-over-par (77) for the final round, concluding the event at even-par (216).

It was a season-best finish for Jack Rhea (Jonesborough, Tenn.) as the veteran golfer turned in a 2-over-par (218) tournament to finish solo 8th. The Tennessee native posted his second Top-10 finish at the SoCon Championship, finishing one spot behind his previous best of T-6th in 2018. Rhea ended the final round 3-over-par (75), enabling the Bucs to maintain their steady position.

It was a T-15th finish for the reigning 2019 SoCon Champion, Shiso Go (Kanagawa, Japan). Coming into the day at 2-over-par, Go settled for a 4-over-par (76) final round, falling three spots on the leaderboard to 15th. Following the team’s win, Go was named the 2021 Pinnacle Award recipient which goes to the top GPA from the winning team.

The veteran trio of Go, Hulbert and Rhea have paved the way for success at ETSU over the years. This is the first SoCon title for the trio and the second for Hulbert in his playing career. The Bucs won the 2017 SoCon Championship when Hulbert was a redshirt-freshman.

“Jack, Shiso and Trevor deserve this win,” commented Coach Amos. “They have been the reason this team has gotten better these last couple of years. They helped me set the standard of the team when I took over as Head Coach and they have paved the way for this team to win this for years to come. I’m so proud of them, I am so happy they finally got a conference championship and I am happy they are getting to go to regionals with their team. However, by no means do I want their careers to end there. We fully expect to be at nationals this year and that is now what our focus is going to be.”

ETSU finished 5-under-par for the event, eight strokes ahead of Western Carolina who took home second place at 3-over-par (867). Furman finished third in the event with a score of 14-over-par (878).

ETSU will now turn its attention on NCAA Regionals which will begin on Monday, May 17 and run through Wednesday, May 19. The NCAA Selection Show for men’s golf will be on Wednesday, May 5 on the Golf Channel.