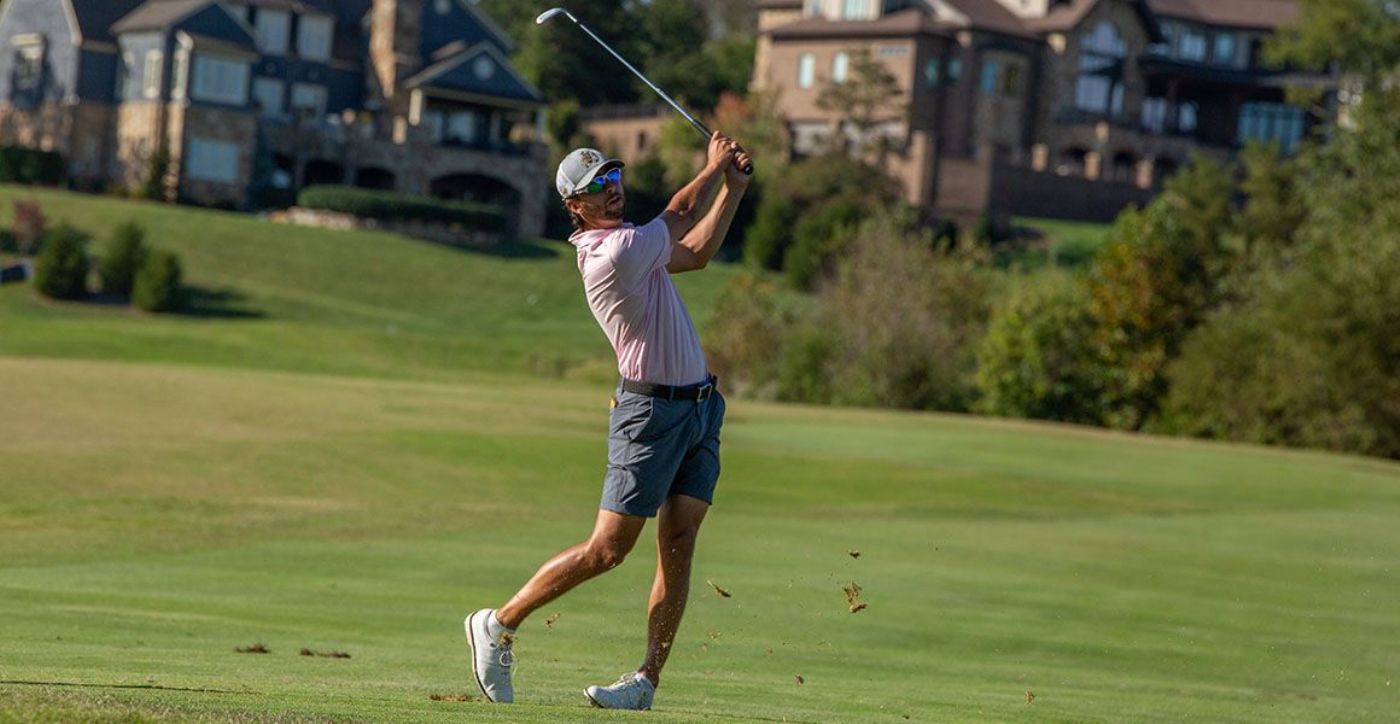 Bucs, Chartier sit atop the leaderboard at Blackthorn Club at The Ridges

JONESBOROUGH, Tenn. (Oct. 11, 2021) – The ETSU men’s golf team and redshirt sophomore Remi Chartier (Montreal, Canada) held their stance atop both leaderboards following Monday’s second round play at the Bank of Tennessee Intercollegiate from the Blackthorn Club at The Ridges.

The Buccaneers, eyeing their second-ever win in this tournament, went low on Monday to sit at 24-under-par 552. The Blue and Gold fired a 13-under 275 in round two thanks to collecting 23 more birdies and two eagles on the afternoon.

ETSU will carry a two-shot lead into Tuesday’s final round as Louisville shot 11-under, moving to 22-under-par 554 for the tournament. Charlotte (-18) and College of Charleston (-12) remained in the third and fourth slots, while Maryland (-11) jumped six spots into fifth after recording a 10-under 278.

Individually, Chartier, who was one of eight golfers tied for the lead at the beginning of the day, opened some breathing room following a flawless round. A day after shooting a collegiate-best 68, Chartier shaved two more strokes off that number by carding a 6-under 66 after tallying six birdies and 12 pars. Chartier is 10-under-par 134 thru 36 holes and leads three golfers by two shots.

Mats Ege (Kristiansand, Norway) and Archie Davies (Carlisle, England) both moved six spots up the board after the Buccaneer duo shot 3-under 69 on Monday. Ege and Davies are tied for ninth at 5-under-par 139. Ege had one of the Bucs’ eagles as he posted a three on the par-5, 567-yard No. 5, while playing the final five holes at two-under to jump into the top-10. Likewise, Davies’ birdie on the par-4, 517-yard 14th sparked a late run, which also included back-to-back birdies on No. 17 and 18 to finish the day.

Freshman Jack Tickle (Bristol, Tenn.) provided the final countable score on the round for ETSU as he bounced back with a 1-under 71. Tickle bagged three birdies on the back nine to move into a tie for 56th at 2-over-par 146 for the tournament.

Campbell Wolf (Mechanicsburg, Pa.), playing as an individual, strung together his second straight round below par as he finished with a 1-under 71, placing him tied for 19th at 3-under-par 141. Ben Carberry (Bonnybridge, Scotland) is tied for the 27th (-2) and Josh McCabe (Dublin, Ireland) is tied for 50th (+1).

Tuesday’s final round begins at 8:30 a.m., while ETSU – who will be grouped with Louisville and Charlotte – go out at 10 a.m.

Live scoring of the tournament is provided via Golfstat.com, while updates are also posted on Twitter by following @ETSU_MGolf.