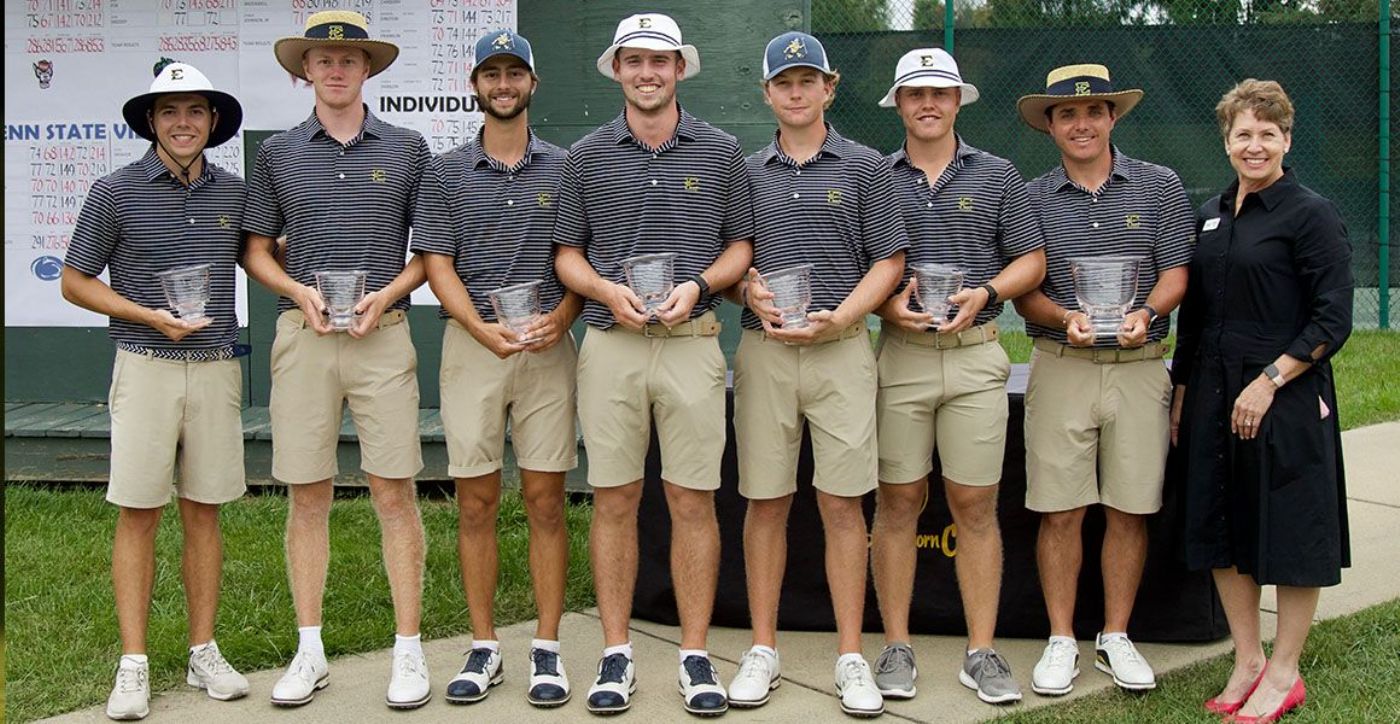 JONESBOROUGH, Tenn. (Oct. 12, 2021) – The Buccaneers are crowned Bank of Tennessee Intercollegiate champions for the second time.

Highlighted by an impressive showing on the back nine of Tuesday’s final round, the 19th-ranked ETSU men’s golf team enjoyed a historic win as the Buccaneers tied the tournament record, finishing at 35-under-par 829 from the Blackthorn Club at The Ridges.

The Bucs, who began the day with a two-shot lead over Louisville, saw the Cardinals open a three-shot lead at the turn, but the Blue and Gold stepped up down the stretch to earn their second win in the 23-year history of the tournament. With the tournament not being held last fall due to COVID, ETSU has won two of the last three titles on its home course.

With the win, ETSU has now recorded three victories in its last five tournaments played, which also includes the 2021 SoCon Championship and NCAA Regional.

“We got off to a slow start as we were three shots back thru nine and then I tried to get the message to our guys to attack every hole,” said head coach Jake Amos. “We weren’t going to win it by hanging on, we made sure to finish well and we did. Everyone played really, really well and we had everyone in it, which is nice to see.”

ETSU held the lead following each round and got the spark they needed from freshman Mats Ege (Kristiansand, Norway). Ege posted a 4-under 68 in the final round to finish tied for seventh at 9-under-par 207, but it was his run of three straight birdies from holes 13-15 to help push the Bucs back into the lead.

The Bucs played the hole at four-under, while Louisville – who ETSU was tied with at the time at 32-under – walked away at two-over on No. 14, resulting in the change atop the leaderboard. Ege, Archie Davies (Carlisle, England), Algot Kleen and Jack Tickle (Bristol, Tenn.) all came away with birdies to help give the Blue and Gold some breathing room.

When all the dust settled, the Bucs enjoyed a six-shot win over both Louisville and Charlotte. ETSU led the 15-team field with 69 birdies and three eagles, while also topping the field in par-5 scoring at 28-under-par.

“It was nice to see the last putt roll in,” said Amos. “The last three holes are tough but we played them so well. After we played (holes) 12-14 really well, we separated ourselves a little bit and played great down the stretch.”

Davies finished right behind Ege in a tie for ninth at 8-under-par 208 as the reigning Southern Conference Player and Freshman of the Year carded his second straight round of 3-under 69.

Meanwhile, Remi Chartier (Montreal, Canada), the 36-hole leader, paced the Blue and Gold as he finished tied for third, marking his best collegiate finish. Chartier shot a 1-under 71 on Tuesday and finished with a 54-hole score of 11-under-par 205.

Tickle finished strong as he turned in a 3-under 69 on Tuesday to finish tied for 38th at 1-under-par 215. The Bristol, Tenn. native played the final 36 holes at four-under.

Ben Carberry (Bonnybridge, Scotland), playing as an individual, was flawless in the final round en route to finishing tied for 13th at 7-under-par 209, marking his lowest collegiate 54-hole score. Carberry shot his lowest collegiate round on Tuesday by carding a 5-under 67 to move 14 spots up the leaderboard.