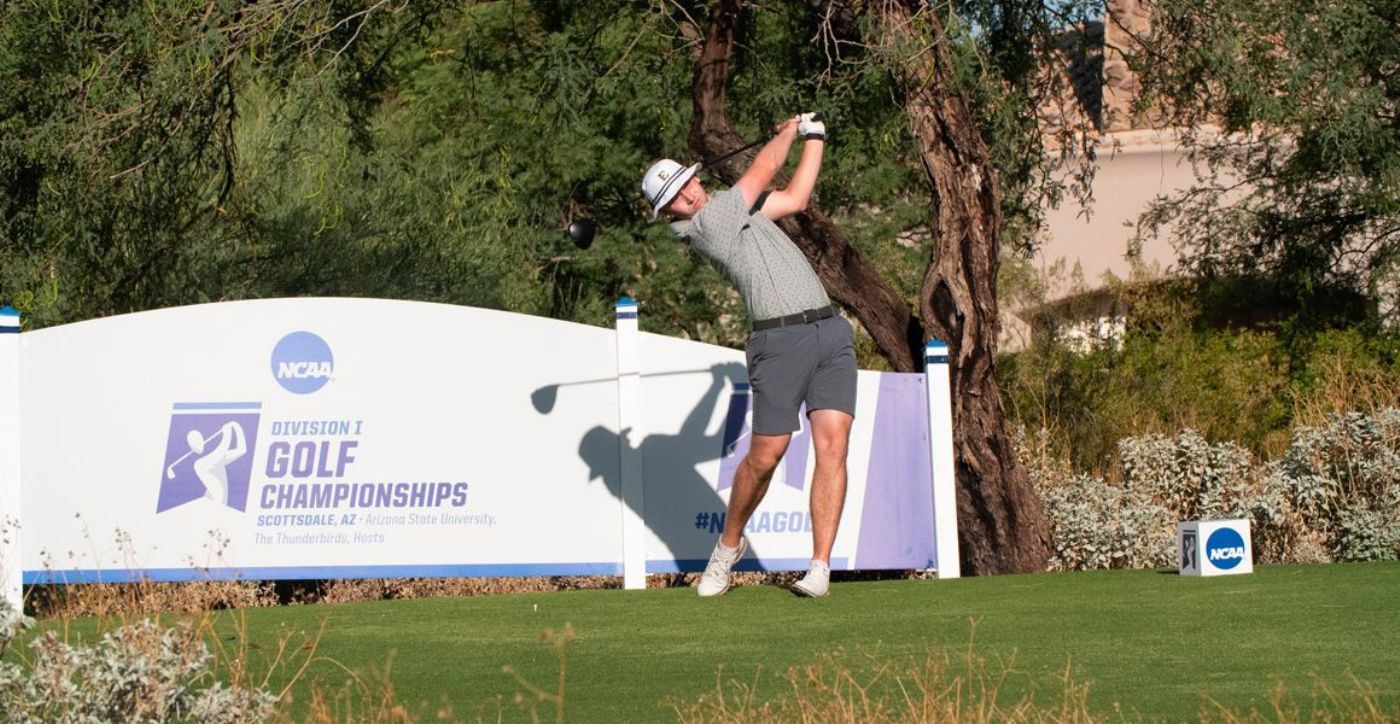 Davies moves into third round at The Amateur Championship
Related Links

Buccaneer All-American rallies back for win on 22nd hole

Lytham St Annes, Lancashire, England (June 15, 2022) – It wasn’t easy and he needed extra holes, but when the dust settled ETSU’s Archie Davies (Carlisle, England) was one of 32 golfers to advance into third round play following the opening round of match play on Wednesday at the 127th Amateur Championship.

After finishing tied for fourth following 36 holes of stroke play on Monday and Tuesday, Davies faced off with Denmark’s Kristian Hjort Bressum in the second round of match play on Wednesday at the Royal Lytham & St Annes Golf Club. The Buccaneer All-American fell into trouble early as he was down one after the first three holes and dropped another through six. Davies was able to get one back before making the turn and was still down one after 15 completed holes.

From there, Davies walked to the 18th tee box still trailing by one and provided the late heroics to force the match to into extra holes. Davies birdied the 410-yard, par-4, and needed to play four more holes to secure the win. Davies kept the match alive with a 25-foot putt on the 20th hole, while Bressum three-putted the following hole to send it to the 22nd hole. With his back against the wall all day, Davies continued to show his grit and determination as he recorded a par to defeat Kristian Hjort Bressum.

Davies, who dropped his opener in match play a year ago, will now take on Caolan Rafferty of Dundalk in Thursday’s third round at 3:51 a.m. ET. Rafferty defeated American Youssef Guezzale by one hole in his match on Wednesday. Davies was given the No. 6 ranking in match play and Rafferty is ranked No. 38. The winner of that match will then move on to the fourth round, which will get underway Thursday at 8:50 a.m. ET.

Click here for the full match play bracket. Live scoring is also provided via The R&A.

The R&A will provide live broadcast coverage of the quarterfinals and semifinals on Friday 17 June and the 36-hole Final on Saturday 18 June. This can be watched on The R&A’s website randa.org as well as its YouTube channel.

The first Amateur was held at Hoylake in 1885 where 44 players from 12 clubs competed. Some of golf’s greatest names have triumphed, including Bobby Jones, Sergio Garcia and José María Olazábal.

Contested over stroke play and then match play, the winner secures exemptions into The Open and the US Open, and by tradition, an invitation to play in the Masters Tournament.