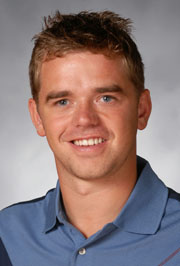 Fall 2007: A preseason third-team All-America selection … posted the team’s second best stroke average during the fall, ending the early season at 71.4 … enjoyed three Top 6 finishes, including an impressive sixth-place showing at the highly competitive and prestigious Western Refining College All-American Classic … posted a season low 67 at the Western Refining College All-American Classic, as well as his best three-round score of the year (206). 2006-07 Season: Finished second on the team with an impressive 71.8 stroke average … was selected first team All Atlantic Sun, was a PING All South Region pick by the GCAA, and earned PING All-America honorable mention honors … participated in the Palmer Cup as a member of the Great Britain and Ireland team … was named to the GCAA All-American Scholar team … also competed in the World Team Amateur Championship representing Ireland during the fall … helped the Bucs to a strong start at the NCAA Championships, posting rounds of 69 and 68 on the first two days to lead ETSU to a fourth place standings following the second round … enjoyed two Top 10 finishes during the year, with his best showings coming at the Atlantic Sun Conference Championships and the PING Arizona Intercollegiate, where he finished tied for fifth … low round of the year was a 67 at the NCAA West Regional … fired nine sub 70 rounds on the season. 2005-06 Season: Showed the most improvement among ETU's returning players, bettering his 2004-05 average round by three strokes to 72.5 ... enjoyed four Top 10 finishes, including his best showing of the year with a tied for fifth at the General Hackler Invitational … he saved his best for last, posting his season low for single round score with a 67 at the NCAA West Regional. 2004-2005 season: Played in all 12 tournaments for the Bucs as a freshman, finishing tied for first on the team with 35 rounds played ... ended the year third on the team with a stroke average of 75.4 ... his best three-round score of the year came at the NCAA East Regional, where he posted a 212 and finished tied for 26th ... posted his best single round score at the Puerto Rico Classic, firing a 68. Prior to ETSU: Was a member of the 2002 and 2003 Great Britain and Ireland Boys Team and will make the third Irish player that will compete for the Buccaneers this season ... won the 2001 Leinster Boys Championship and the 2002 Connacht Boys Championship ... in addition to representing Ireland in the 2001, 2002 and 2003 Boys Home International Championships, Shaw was the runner-up in 2002 for the Irish Boys Amateur Championship ... joins a long list of Irish players to have competed at ETSU, including greats such as Keith Nolan, Eamonn Brady, Bryan Omelia and John-Paul Fitzgerald. Personal:  Born on ... is expected to major in accounting ... Gareth is the son of Mervyn and Heather Shaw.