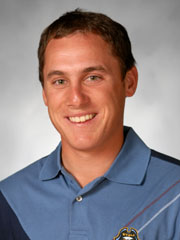 Fall 2007: Ended his final fall season at ETSU with a 75.4 stroke average, ranking fourth among players who competed in at least three tournaments in the early season … posted a low round of 72 at the Carpet Capital Collegiate, and his best finish of the fall was a tie for 44th at the Bank of Tennessee Intercollegiate at the Ridges. 2006-07 Season: Finished fourth on the team with a 75.3 stroke average … posted a season best single round of 65 in the third round of the Puerto Rico Collegiate Classic … his best finish of the year came at the same tournament in Puerto Rico, when he placed tied for 17th with his best three round score of the season at 215. 2005-06 Season: Finished third on the team with a 74.5 stroke average … posted a season best 68 in the first round of the NCAA Championship … finished a season best 16th two times, once in the spring at the GCAA Hall of Fame Invitational and once in the fall at the Bank of Tennessee Intercollegiate at The Ridges … carded a fall-best 69 in the second round of the Carpet Capital Intercollegiate. 2004-05 Season: Quickly became a major producer for the Bucs in his freshman season, finishing second on the team with a stroke average of 73.87 ... his low rounds of the year came when he posted 68 at the Puerto Rico Classic (second round) and the Seminole Intercollegiate (third round) ... his best three-round score of the year came at the Puerto Rico Classic, where he finished tied for 12th in an extremely competitive field ... competed in 11 of 12 events, missing only the Bank of Tennessee Intercollegiate at the Ridges while competing internationally ... his 31 rounds of play were second only to Rhys Davies (35), senior Cennydd Mills (33) and fellow freshman Gareth Shaw (35). Prior to ETSU: One of the top young amateur players in Ireland, winning the 2002 Junior British Open and Irish Boys Championships, as well as the 2003 Munster Boys Championship and the 2004 Munster Youth title ... youngest winner of the South of Ireland Championship in over 100 years ... named to the 2005 Walker Cup squad ... a member of the Irish Boys European and Home International Team, he is also a two-time selection to the Great Britain & Ireland Boys Team ... was the captain of his high school golf team and also enjoys playing soccer ... first name is pronounced Key-an. Personal: Born on Feb. 16, 1986 ... is expected to major in sports management ... Cian is the son of Dermot and Eleanor McNamara.