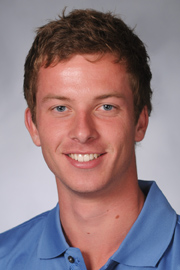 2009-10 Season: Was named Cleveland Golf/Srixon All-America Scholar…Finished the season with four top-25 finishes including a pair of top six finishes…Finished tied for sixth at both the Coca-Cola Wofford Invitational and the Atlantic Sun Championship…Posted a low round of 69 at the Coca-Cola Wofford Invitational…Compiled a 74.2 stroke average on the season.

2008-09 Season: Finished fourth on the team with a 74.6 stroke average … he enjoyed two Top 10 showings, with a season best tie for sixth at the Robert Kepler Intercollegiate … he posted a low round of 71 three times.

2007-08 Season: Played in two events as a freshman, and picked up his best finish of the year with a tie for 49th at the Jerry Pate National Intercollegiate … his low round of the year was a 72, which he posted in the second and third rounds in the Jerry Pate … finished fifth on the team with a 76.1 stroke average.

Prior to ETSU: Member of the Irish Boys Team ... reached the fourth round of the 2006 British Boys Amateur ... semifinalist in the 2006 Irish Amateur Championship.