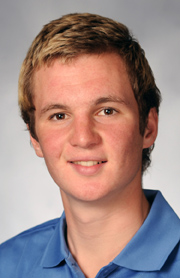 Fall 2008: Wasted little time picking up a quality finish as a freshman, posting a tie for sixth at the Bank of Tennessee Intercollegiate, where he also fired a early season best 69 in the second round … finished fourth on the team with a 74.4 stroke average. Prior to ETSU: A former Scottish Boys champion ... is a member of the Scottish Boys Team and was also a member fo the six-man Great Britain and Ireland Boys Team in 2007. Personal: Born June 3, 1990 ... majoring in sports management ... son of Robert and Pauline Stewart.