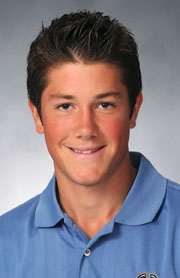 2010-11 Season: Played in the first tournament of the year at the Carpet Capital Collegiate, where he finished tied for 46th…Sat out the rest of the season due to an injury and was granted a redshirt…Was named to the Atlantic Sun All-Academic Team.

2009-2010 Season: Was named Cleveland Golf/Srixon All-America Scholar…Earned First-Team All-Atlantic Sun honors…Named Ping All-American and Ping All-Region…Competed in the prestigious Palmer Cup matches for the European team this past summer…Also competed in the highly competitive British Amateur where he advanced to the quarterfinals…Earned an individual berth to the NCAA Championship where he finished tied for 34th (72-74-70—216)…Shared medalist honors at the NCAA East Regional (65-68-70—203)…Finished first on the team with a 72.3 stroke average on the season … had six Top 10 finishes during the year … his low round of the season was a 65, which he fired during the first round of the NCAA East Regional … won A-Sun Golfer of the Month honors for October after three top-10 finishes during the month.

2008-2009 Season: Was a first team All-Atlantic Sun Conference pick … finished second on the team with a 73.7 stroke average, and posted his low round of the year with a 68 in the Larry Nelson Collegiate … he enjoyed five Top 10 finishes on the season, and captured his first collegiate championship in the Shoal Creek Intercollegiate, posting his low round of the fall with a 69 in the second round of that event … joined former Buccaneer who shares his same first name – Rhys Davies – as a past champion at Shoal Creek … was named A-Sun GOTM for September following his Shoal Creek win.

2007-08 Season: Enjoyed a fantastic freshman season, finishing second on the team with a 73.1 stroke average and being selected as the Atlantic Sun Conference Freshman of the Year … he was also a first-team All A-Sun pick … burst onto the scene with three Top 7 finishes in his first four collegiate events, and later enjoyed his best finish of the year with a second place showing in the Atlantic Sun Conference Championships … he matched his low round of the year twice, posting 68s in the Bank of Tennessee Intercollegiate as well as the Isleworth-UCF Collegiate Invitational.

Prior to ETSU: Member of the Welsh Men’s Team…Played for the Great Britain and Ireland Boys Team in 2006 ... reached the third round of the 2007 British Amateur.