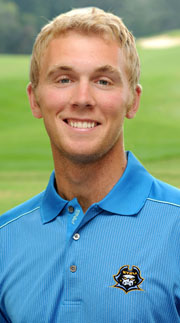 Fall 2008: Finished third on the team with a 74.0 stroke average in the fall … his best finish of the early season was a tie for 18th in the Bank of Tennessee Intercollegiate … his 72 in the second round of the Carpet Capital Collegiate was his low round of the fall. 2007-08 Season: Set a new school record with his three round score of 198 on way to winning the Jerry Pate National Intercollegiate … posted rounds of 65-66-67 at the Jerry Pate … his 65 in the first round of the Jerry Pate was his season best … had three Top 10 finishes and two Top 5 showings during the year … was a second team All A-Sun selection … was named Atlantic Sun Player of the Month in October … it was his third career A-Sun GOTM honor … finished third on the team with a stroke average of 73.4. 2006-07 Season: Enjoyed a fantastic freshman season, winning the Atlantic Sun Conference individual championship, finishing as a first-team All A-Sun pick and earning A-Sun Freshman of the Year honors … he ranked third on the team in stroke average at 72.1 … low round of the year came at the Jerry Pate National Intercollegiate with a 64 in the second round … enjoyed two Top 10 finishes with a first place at the A-Sun Championships and a tie for second at the PING Arizona Intercollegiate … won the 2007 Irish Youth Championship, marking the second time he’s won that title. Prior to ETSU: Was the 2005 Irish Youth Champion and finished fourth in the 2005 Irish Amateur ... He also played in this season’s Irish Open, a European PGA Tour event. Personal: Born March 4, 1987 ... an accounting major ... son of Edmond and Philomena Power.