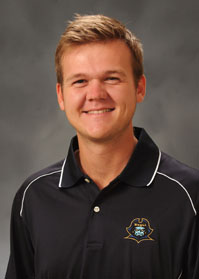 2012-13 Season
Named Second Team All-Atlantic Sun and Atlantic Sun All-Academic … placed on the A-Sun and Coca-Cola Invitational All-Tournament Teams … played in all 11 tournaments and recorded three top 10 finishes in his second season with the Bucs … enjoyed his best finish of the season by placing second at the A-Sun Championship (72-75-70 – 217) … fired his lowest three-round score en route to finishing third at the Coca-Cola Invitational (72-68-71 – 211) … finished ninth (1-under-par 215) at the Tar Heel Intercollegiate … registered his lowest round of the season in the 2012-13 opener in Chapel Hill … fired a 6-under-par 66 in the first round of the campaign … ranked second on the team in scoring average (74.2) and led the Blue and Gold in pars per round (11.09)
Enjoyed a busy summer where he played in the Open Championship at Muirfield … advanced to match play at the U.S. Amateur Championship … selected to play in the Walker Cup for the second time of his career.

2011-12 Season
Earned a spot in the 2013 Open Championship after winning the European Amateur Championship in August.

Participated in 10 events for the Bucs in his freshman season … enjoyed his best finish at the Coca-Cola Invitational where he finished in a tie for eighth … tied for 11th at the Atlantic Sun Championship after shooting a 225 … fired his lowest round of the season, 68, in the third round of the Bank of Tennessee Intercollegiate on Oct. 16 … finished in a tie for 18th in the home tournament after shooting a 76-77-68 for a final score of 221.

Prior to ETSU
Was the youngest member of the 2011 Walker Cup Team...Won the Peter McEvoy and Fairhaven trophies in 2010...Became the youngest player to represent Wales at the senior level in the Men’s Home Internationals (15 years old)… Represented Wales in the European Men’s and Eisenhower Trophy, while also leading the under-18 Great Britain and Ireland Team as the captain...Perhaps his biggest win came at the Irish Amateur Open in 2011...Was only the second Welshman to win the title in the 119-year history of the event...Earned two British under-18 Championships, three Welsh Order of Merit titles, two Clwyd Open titles, and a title at Aberconwy...Was named Welsh Amateur of the Year in 2009.