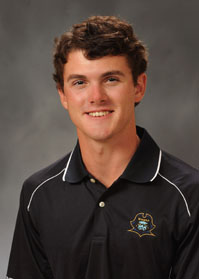 2014-15 Season
Received All-SoCon honors, while being named to the SoCon Academic Honor Roll … Played in eight tournaments and posted a pair of top-5 finishes … Missed portion of the season due to injury … Recorded a 73.39 scoring average, while totaling 11 rounds of par or better and three in the 60s … Finished third at the Wolfpack Intercollegiate (4-under-par 209) and was fourth at the weather-shortened Bank of Tennessee Intercollegiate at Blackthorn (5-under-par 139).

2014 Summer
Enjoyed a successful summer tour as he won the Delaware State Golf Association Amateur Championship, Delaware Open and Eastern Amateur ... Hickman won the Eastern Amateur with a record-breaking score of 22-under-par 258, while also setting 18, 36, 54, and 72-hole scoring records ... He also claimed the 2014 Delaware Open title with a 13-under-par 200 (69-66-65) en route to winning by five strokes ... Hickman began the summer tri-fecta by winning the Delaware State Golf Association Amateur Championship ... the Buccaneer golfer carded a 3-under-par 281 to be the only player in red figures for the tournament ... Hickman also finished 18th in the Porter Cup with a final round of 66.

2013-14 Season
Played in all 13 tournaments for the Bucs … Posted two top-10 finishes – tied for seventh at the Atlantic Sun Championship and tied for eighth at the Wolfpack Intercollegiate … Ranked third on the team in stroke average (73.8), while his lowest round of the year was a 68 in round two of the Puerto Rico Classic … Won the 2014 Delaware State Golf Association Amateur Championship … Ranked second on the team in par-5 scoring (4.89).

2012-13 Season
Played in all 11 tournaments during his first season with the Bucs … top finish came at the Sea Best Invitational – tied for ninth (76-76-71 – 223) from the PLAYERS Stadium Course at TPC Sawgrass … fired his lowest round of the season in his second collegiate tournament as he carded a 2-under 69 in the third round of the Mason Rudolph Championship … recorded 10 rounds of par or better and totaled 90 birdies.

Prior to ETSU
A four-year letterwinner for head coach William Darrin at The Blue Ridge School, will come to Johnson City with plenty of accolades during his junior career … ranked the top 2012 junior in both Maryland and Delaware, while also earning honorable mention honors for the USGA-AJGA Presidents’ Leadership Award … qualified for the 2011 U.S. Junior Amateur, where he was 55th in stroke play before losing 1-down in the match play round of 64 … won the Delaware Junior Amateur Championship the last three years, while being named the 2010, 2011, and 2012 Delaware Junior Player of the Year … was selected to the Delaware Golf Association Williamson Cup Team in 2009, 2010 and 2011, while placing third in 2010 … finished top-10 at the 2010, 2011, and 2012 Delaware Amateur Championship (second in 2012), while also posting several top-10 finishes in AJGA events … during his career at The Blue Ridge School, Hickman has been selected four times a VISAA Division I All-State performer, as well as being a four-time First Team All-VIC selection …  finished third at the 2010 and fifth at the 2012 All Virginia Independent Conference Tournament.