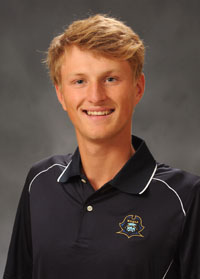 2015 Summer
Became the first Polish player to appear in the Palmer Cup … Won three of his matches at the Palmer Cup, while halving his other match … Defeated Stanford’s Maverick McNealy – college golf’s player of the year – 3&2 in singles in his final match of the tournament … Helped the Europeans earn points in the opening round as Meronk and Spain’s Pep Angles defeated McNealy and Texas’ Beau Hossler 3&2 in foursomes play, while Meronk and Belgium’s Thomas Detry beat Georgia Tech’s Ollie Schniederjans and Georgia’s Lee McCoy in four-ball, 4&3.

2014-15 Season
Played in all 13 tournaments for the Buccaneers, posting three wins and nine top-10 finishes, while being ranked as high as 14th in the national polls … Received All-American honors from PING and Golfweek, while also being selected to the PING All-Region Team … Named SoCon Player of the Year, First Team All-Southern Conference and SoCon Player of the Month (April) … Named to the SoCon Academic Honor Roll … Won the season-opening tournament at Inverness Intercollegiate (Sept. 22-23) and earned co-medalist honors two weeks later at the Wolfpack Intercollegiate (Oct. 6-7) … Registered four straight top-10 finishes to start the season and recorded his lowest round of the year with a 66 in the second round of the Warrior Princeville Invitational – where he finished tied for seventh … Was named SoCon Golfer of the Week (April 8) after finishing third at the Mason Rudolph Championship … Tied for the SoCon Championship at 9-under-par 207, but lost in a sudden-death playoff … Leads ETSU in scoring average (70.65) and has totaled 29 rounds of par or better this season, including 12 rounds in the 60s.

2013-14 Season
Received Second Team All-Atlantic Sun and PING All-Regional honors ... Ranked second on the team in stroke average (73.00) and posted three top-10 finishes on the season ... Tied for fifth at the A-Sun Championship at 3-over-par 219 (73-73-73), tied for ninth at the Mason Rudolph Championship at 1-over-par 214 (73-75-66) and tied for eighth at the rain-shortened Seahawk Intercollegiate at 1-under-par 143 (68-75) ... Recorded his lowest collegiate score after firing a 5-under 66 in the final round of the Mason Rudolph Championship, which was also tied for the lowest round of the tournament ... Registered nine sub-par rounds on the year, while leading the Bucs in par-5 scoring (4.88) and ranked 91st nationally with 117 birdies.

2012-13 Season
Named Second Team All-Atlantic Sun and Atlantic Sun All-Freshman Team … received Atlantic Sun All-Academic honors  … played in all 11 tournaments for the Bucs during his rookie season … led the Blue and Gold in stroke average (73.8) … totaled a team-best 101 birdies, placing him 60th nationally … best finish came at the Sea Best Invitational where he tied for third at 3-over-par 219 (71-74-74) … carded his lowest round of the year by posting a 4-under-par 68 in the first round of the Warrior Wave Intercollegiate on Nov. 5 …  registered with a score of par or better 10 times and recorded two rounds in the 60s … put up a 69 in the first round of the Coca-Cola Invitational en route to tying for ninth overall.

Prior to ETSU
Meronk was the No. 1-ranked player in 2011 according to the World Junior Golf Rankings … he finished second in the World Junior Golf Series season ending Gate American Junior in Ponte Vedra Beach, Fla. to lock up the No. 1 ranking … Meronk finished 11th at the Junior Orange Bowl International Golf Championship in Coral Gables, Fla. after leading through three rounds … in 2011, Meronk won the Polish Junior Championship and finished runner-up at the Polish Amateur Championship … finished fourth at the 2011 KeNako South African World Championship and reached the fifth round at the 2011 British Boys Amateur Championship to eventually tie for ninth … in April of 2012, Meronk finished 18th at the Junior Invitational at Sage Valley in Augusta, Ga., which is rated the top junior golf tournament in the world by GolfWeek.

Personal
Son of Andrzej and Joanna Meronk … born May 31, 1993 … plans to major in business ... attended Pniewy in Poznan, Poland.