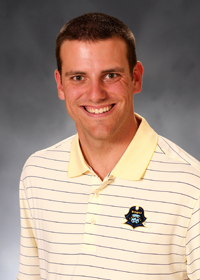 Blake Howard is entering his first season as a volunteer assistant coach for the ETSU men’s golf program.

Howard played collegiate golf at Milligan College where he was a two-time NAIA All-American (Second Team in 2011) and Third Team in 2010). In addition, Howard was received Appalachian Athletic Conference Player of the Year honors in 2010 and 2011.

The Johnson City, Tenn. native received his degree in Business Administration at Milligan and is currently working towards his Master’s in Business Administration at ETSU. While working towards his degree, Howard has also been working at Diamond Creek Golf Club over the past two years, which has been ranked in America's Top 100 Courses by Golf Digest since 2010.

Howard is the son of Steve and Teresa Howard.