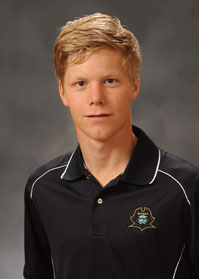 2015 Summer
Advanced to match play at the British Amateur Championship … Finished tied for third at 5-under-par 137 in stroke play, but fell to teammate Mateusz Gradecki in the second round of match play, 1-up.

2014-15 Season
Won two tournaments and represented ETSU at the 2015 NCAA Championship … Named SoCon Golfer of the Week (March 18) and General Shale SoCon Student-Athlete of the Week (April 14) … Named to the SoCon Academic Honor Roll … Played in 12 tournaments and registered a scoring average of 73.68 … Won first collegiate tournament at Seminole Intercollegiate (March 13-15) with a 54-hole score of 17-under-par 199, marking the lowest score in program history … Tied the ETSU single-round record and course record (Southwood Golf Course) with a 9-under 63 in the opening round … Shared medalist honors at the Greenbrier Collegiate Invitational (April 13-14) after finishing the shortened event at 3-under-par 137 … Led the Bucs at the NCAA Regional (San Diego) after finishing sixth at 3-under-par 213 … Recorded his first-ever hole-in-one in the opening round of the NCAA Championship … Totaled 10 rounds of par or better and six rounds in the 60s.

2012-13 Season
Named to Atlantic Sun All-Freshman and A-Sun All-Academic Teams … played in all 11 tournaments in his first season in the Blue and Gold, while ranking third in stroke average (74.8) … was solid in his collegiate debut as he posted his best finish of the year by tying for sixth at the Tar Heel Intercollegiate (68-73-73 – 214) … the 68 in his first collegiate round tied his lowest round of the campaign as he also accomplished the feat at the Rudolph Mason Championship and at the U.S. Collegiate Championship … registered 10 rounds of par or better and ranked second with 90 birdies.

Prior to ETSU
Kristjansson comes to ETSU with a successful junior playing career in his home country of Iceland … in 2005, 2007, 2008, and 2009, Kristjansson was the Icelandic Junior Match Play champion … Kristjansson also earned medalist honors at the 2005, 2006, 2008 and 2010 Icelandic Junior Stroke Play Championship … perhaps Kristjansson’s biggest golf accomplishment so far was winning the 2010 Duke of York young champions trophy … he also claimed the 2010 Reykjavik Golf Course Golf Championship … finished fourth at the European Men’s Team Championship, where he shot 71-67 — 138, and moved up to 276th in the European Golf Rankings … has recorded over 25 career victories in his junior golf career, including eight wins in 2010 … also earned an impressive fourth place finish at the 2010 Junior Orange Bowl International Golf Championship in Coral Gables, Florida.