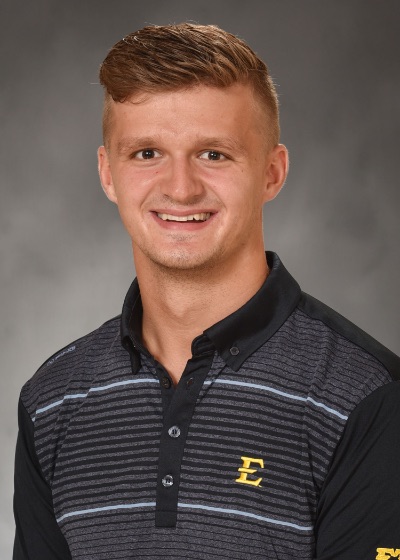 Made his second straight appearance in the British Amateur Championship.

Named to the SoCon All-Academic Honor Roll … Played in all 13 tournaments for the Bucs, while posting a 73.46 stroke average … Recorded two top-10 finishes as he tied for fifth at the SoCon Championship and finished tied for seventh at the Mason Rudolph Championship … The fifth-place finish at the SoCon marked his best collegiate placing … Totaled 13 rounds of par or better with his lowest round being a 69, which was accomplished twice (Warrior Princeville Makai Invitational and Mason Rudolph Championship) … Registered 104 birdies on the season and ranked second on the team in pars per round (11.15).

2015 Summer
Appeared in the British Amateur Championship … Advanced to match play before falling to England’s Sean Towndrow by one in the third round of the tournament … Defeated teammate Gudmundur Kristjansson in the second round and beat Germany’s Alexander Matlari, 2-up, in the opening round.

2014-15 Season
Named to the SoCon Academic Honor Roll … Played in all 13 tournaments for the Bucs … Recorded a scoring average of 74.1, while totaling 10 rounds of par or better and two rounds in the 60s … Showcased his best collegiate finish at the Southern Conference Championship as he placed tied for fifth to help guide ETSU to the tournament win … Fired a 68 in the opening round of the championship, marking the lowest round of his collegiate career … Also carded a 68 in the final round of the Seminole Intercollegiate (March 15).

2013-14 Season
Played in 12 of the 13 tournaments for the Bucs in his rookie season … Posted a stroke average of 75.8 … Recorded seven rounds of par or lower, including two rounds of 69 set in the second rounds of the Bank of Tennessee Intercollegiate and Warrior Princeville Makai Invitational … Had a pair of top-30 finishes, including a season-best 22nd-place finish at the Atlantic Sun Championship.

Prior To ETSU
Won the 2011, 2012, and 2013 Polish Amateur Championships ... finished first in the 2012 World Junior Golf Series (WJGS) rankings ... also finished fifth at the 2012 Junior Orange Bowl Championship ... posted four top-5 finishes in the WJGS, as he also finished second in both the American Junior and Toya Polish Junior Tournaments, and third in the Czech International Junior Amateur Championship ... played with former ETSU golfer Adrian Meronk in the 2012 World Team Championship and tied for 67th in the 214-player field back in October 2012 ... In May of 2012, Gradecki also led Poland in the French Amateur after posting a 70 in the final round to finish in a five-way for ninth ... Lowest competitive round was a 61 in 2011 ... Have won 11 events that fall under the World Amateur Golf Rankings - including five wins in the Polish Amateur Championship.