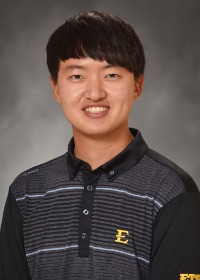 Received Srixon/Cleveland Golf All-American Scholar honors ... Earned Southern Conference honors, while being placed on the SoCon All-Academic Team and SoCon Honor Roll ... Played in all 11 tournaments for the Blue and Gold ... Ranked fifth in the SoCon in scoring average (72.94) ... Totaled two top-10 finishes, including a win at the Wofford Invitational on April 10 ... Rallied from seven shots back on the final day to win the Wofford Invitational at 11-under-par 205 en route to earning SoCon Golfer of the Week and Student-Athlete of the Week honors ... Finished tied for seventh at the conference championship, while turning in an 11th-place finish at the Louisville Cardinal Challenge on Oct. 1 ... Posted two rounds in the 60s, which included a career-best 6-under 66 in the final round of the Wofford Invitational.

Named to the SoCon All-Freshman Team and the SoCon All-Academic Honor Roll … Appeared in 11 of ETSU’s 13 tournaments … Top finish came at the Greenbrier Collegiate Invite where he tied for ninth … Had four rounds of par or better with his lowest score being a 70 in the second round of the Seminole Intercollegiate.

Won seven WGT Tournaments, including the Major Championship at Kiawah Island, WGA Junior at Hilton Head National and the Sanctuary Shootout ... Was a two-time Student of the Month at Heritage Academy.