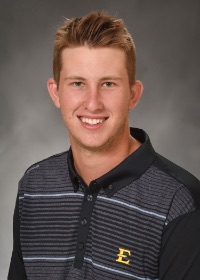 Named to the Southern Conference Honor Roll ... Did not play in any tournaments in 2017-18

Named to the 2016-17 Southern Conference Honor Roll … Played in seven tournaments for the Bucs in his freshman season … Made collegiate debut at Rod Myers Invitational on Sept. 10 … Registered a scoring overage 76.4 … Posted lowest collegiate score with a 72 in the opening round of the Schenkel Invitational on March 17.

A multi-sport athlete at Cochranton Junior-Senior High School, has lettered in both golf (four years) and basketball (two years) for the Cardinals. The Cochranton, Pa. native was named Meadville Tribune Player of the Year, while being a three-time first team all-region and three-time first team all-district recipient. This fall, Ford finished third at the PIAA Championship en route to earning first team all-state accolades. In addition to his high school play, Ford has posted one top-5, two top-15 and three top-20 finishes on the American Junior Golf Association level. In August, Ford finished fourth at the New Era Junior Championship with a 2-under-par 214 (70-68-76) at Harvest Hill Golf Course in Orchard Park, N.Y., while finishing tied for 12th at the JoS. A. Bank / David Leadbetter Championship at Cattail Creek Country Club in Glenwood, Md.