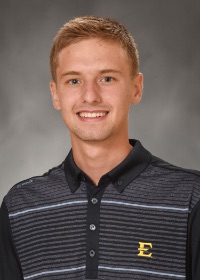 Named to the 2016-17 Southern Conference Honor Roll … Finished runner-up at the 2017 Tennessee State Amateur Championship … Played in six tournaments for the Bucs in his freshman season … Made collegiate debut at Rod Myers Invitational on Sept. 10 … Recorded a stroke average of 76.33, while posting his lowest collegiate score in the first round of the Bank of Tennessee Intercollegiate where he shot a 70 … Played in the NCAA College Grove Regional for the Blue and Gold.

Four-year letterwinner at Woodstock High School … named 2016 Scholar-Athlete of Woodstock by the Army … Three-time Player of the Year honoree and four-year all-county selection … Posted the lowest 18-hole score for Woodstock in the 2016 regional (68).

Son of Donald and Julie Burns … born Feb. 3, 1998 … plans to major in Finance ... Brother of Brian, David, Eric and Adam Burns ... His uncle is the lead singer of the country band Trick Pony.