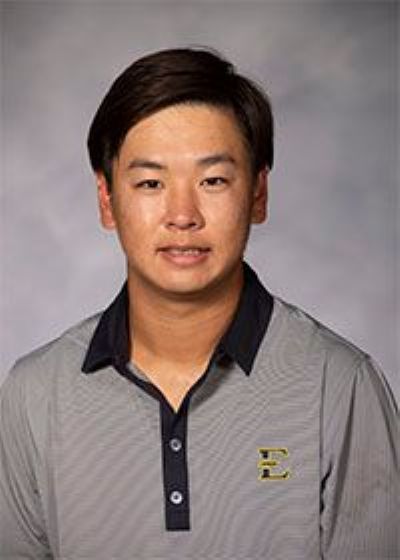 2020-21 (Senior): Named to the SoCon Honor Roll and SoCon All-Academic Team … Awarded the SoCon Commissioner’s Medal … Tabbed as a PING All-American Honorable Mention … Concluded his playing career third all-time in scoring average (72.33), while placing sixth in career wins with three … Earned a spot on the PING Division I East All-Region team … Named to the All-SoCon team … Appeared in all 11 tournaments, playing a total of 32 rounds with an average of 73.2 strokes per round … Claimed his third career victory with a podium finish at the NCAA Cle Elum Regional following a final-round score of 67 (-4) … Claimed the regional victory by one stroke, also fending off fellow teammate Archie Davies by two strokes … The solo victory in Washington was the lone Top-10 of the season, also lifting ETSU to its first NCAA Regional victory since 2001 … Carded 13 rounds of par or better on the season, including six rounds in the 60s … Posted a season-low round of 67 on two occasions (Stitch Intercollegiate first round and Cle Elum Regional third round) … Played in both the U.S. Amateur Championship and the Western Amateur Championship.

2019-20 (Junior)*: Tabbed a Srixon/Cleveland Golf All-America Scholar … Placed on the SoCon Honor Roll … Began the year by competing in the British Amateur Championship … Named to the PING Division I East All-Region Team … Appeared in all seven team tournaments for the Bucs … Ranked second on the team in scoring average, averaging 71.62 strokes per round in 21 rounds of play … Concluded the year ranked No. 90 in the final Golfstat rankings … Twice named SoCon Men’s Golfer of the Week in back-to-back weeks … Claimed the individual title at the inaugural Hoakalei CC Collegiate Invitational in Hawaii, leading the Bucs to the team victory … Paced the Bucs in two of the seven tournaments, including the season opener at the Carpet Capital Collegiate (T9) … Recorded three Top 10 finishes on the season, including first place in Hawaii … Finished the year with 12 rounds of par or better, including five rounds scoring in the 60s … Carded a season-best 66 in two of the three rounds in Hawaii.

2018-19 (Sophomore): Earned All-Southern Conference honors … Earned medalist honors at the SoCon Championship – his first collegiate win – en route to receiving the automatic bid to the NCAA Regional (Stanford) … Named Southern Conference All-Academic List and SoCon Honor Roll … Ranked second on the team with a 72.00 scoring average … Played in 12 tournaments … Finished runner-up at the Bank of Tennessee Intercollegiate after tying the single-round course record for the second consecutive season (63) … Led the Blue and Gold in three tournaments … Finished with 18 rounds of par or better and seven rounds in the 60s.

2017-18 (Freshman): Earned Southern Conference, SoCon All-Freshman Team and SoCon Honor Roll honors ... Led the Bucs in scoring average (72.53), while the mark ranked second in the SoCon and topped all freshmen in the conference ... Played in all 11 tournaments, while carding three rounds in the 60s and 16 rounds of par or better ... Broke the Bank of Tennessee Intercollegiate tournament record by firing a 9-under 63 in round two ... Posted the first of two top-10 finishes at the Wofford Invitational (T6), while he finished tied for seventh at the SoCon Championship ... Turned in countable scores in 29 of his 32 rounds played this season.

High School: Attended Heritage Academy in Hilton Head, S.C. … Recorded several wins over his high school career … Claimed medalist honors at the 2014 and 2015 IJGT IJGA Inviational, 2014 Japan Regional High School Championship, 2014 IJGT College Series at N.C. State and the 2014 IJGT Major Championship at Dormie Club … Named the 2015 IJGT Player of the Year and posted a scoring average of 73.5 in 2016, carding a low round of 65.