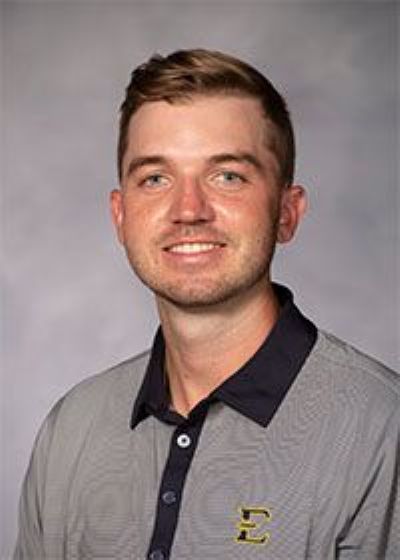 2020-21 (Graduate): Named to both the SoCon Honor Roll and SoCon All-Academic Team … Earned a spot on the PING Division I East All-Region team … Concluded his career 10th in program history in career scoring average with a mark of 73.37 per round … Earned a position on the All-SoCon team … Named SoCon Golfer of the Week on March 24 … Competed in all 11 events on the season for ETSU, leading the way in three of the events … Averaged a career-best 72.7 strokes per round in his final season as a Buccaneer … Posted five Top-10 finishes on the year, including three Top-5 results … Finished T-3rd at the Scenic City Collegiate for his best result of the season … Recorded back-to-back Top-10 finishes at the SoCon Championship (T-5th) and the NCAA Cle Elum Regional (T-6th) … Fired a low-round of 64 in the final round of the Stitch Intercollegiate … Finished the year with 18 rounds of par or better, including six rounds in the 60s … Competed in the 120th North & South Amateur Championship … Placed 54th in the 91st Southeastern Amateur Championship.

2019-20 (R-Senior)*: Named a Srixon/Cleveland Golf All-America Scholar in addition to being named to the SoCon Honor Roll … Competed in all seven events for the Bucs on the season, averaging 72.90 strokes per round in 21 rounds of action … Recorded first collegiate SoCon Player of the Week award on March 11 after posting his best collegiate finish of second place at the General Hackler Championship … Carded a season-low 67 in the final round of the General Hackler to claim his best collegiate finish (T2), marking the second lowest round of his career … Led the General Hackler field in par-4 scoring, averaging 3.80 strokes per par 4 … Capped off the season with nine rounds of par or better, including two rounds in the 60s.

2018-19 (R-Junior): Named Srixon/Cleveland All-American Scholar ... Named to Southern Conference Spring Academic Team and SoCon Honor Roll ... played in all 11 tournaments for the Blue and Gold and finished with a 72.94 scoring average ... turned in four top-20 finishes, which included a tie for fourth at the SoCon Championships ... Finished tied for 10th at the Schenkel Invitational, tied for 12th at the Bank of Tennessee Intercollegiate and tied for 19th at The Prestige ... Totaled 14 rounds of par or better and six rounds in the 60s – his season-low being a 66 in the opening round of the Bank of Tennessee Intercollegiate.

2017-18 (R-Sophomore): Named to the Southern Conference Spring Academic Team and earned SoCon Honor Roll honors … Played in 10 tournaments for the Bucs … Posted a 73.66 scoring average, while turning in four rounds in the 60s and nine rounds of par or better … Finished tied for third at the Wofford Invitational at 7-under-par 209, which tied his lowest collegiate tournament finish.

2016-17 (R-Freshman): Named to the 2016-17 Southern Conference Honor Roll and SoCon All-Freshman Team …  Played in all 12 tournaments for the Bucs as a freshman … Tallied a scoring average of 74.50 … Finished third at the SoCon Championship ... Collected six rounds of par or better and four rounds in the 60s – including his lowest round coming earlier this month at the Wolfpack Spring Open when he shot a 68.

High School: Multi-sport athlete at The First Academy (lettered in golf and baseball) ... First golfer in school history to finish top-10 in state championship (T6) ... Won the Bishop Moore Invitational and the District and Regional Championships ... Qualified for the Florida Open in 2013 and 2015 ... Finished eighth at Walt Disney and tied for 15th at FJT Tour Championship at TPC Sawgrass.