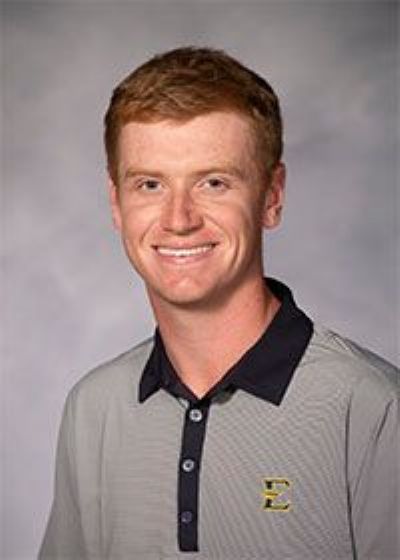 2020-21 (Senior): Named to the SoCon Honor Roll and the SoCon All-Academic Team … Awarded with the SoCon Commissioner’s Medal … Finished his playing career tied for 6th all-time in career scoring at ETSU with a 72.98 scoring average … Played in all 11 tournaments for the Bucs this season, recording two Top-10 finishes … Averaged 74.9 strokes per round in 33 rounds of action … Recorded a season-low round of 69 at the Scenic City Collegiate where he finished T-9th … Finished 7th at the SoCon Championship for his best finish on the season … Posted 10 rounds of par or better, including one round in the 60s … Led the charge for the Bucs at the NCAA Championship, finished T-56th in the field … Competed in four amateur tournaments during the summer, including qualifying for the U.S. Amateur Championship in Bandon, Ore. … Missed the cut for the U.S. Am after falling in playoff holes … Also competed in the 120th North & South Amateur, 67th Sunnehanna Amateur and the Western Amateur.

2019-20 (Junior)*: Proved to be one of the more stable competitors in recent history for the Bucs … Named a PING All-American Honorable Mention and to the PING Division I East All-Region Team … Rhea was also labeled as a GolfWeek All-American … In addition, Rhea was also named a Srixon/Cleveland Golf All-America Scholar Athlete and appeared on the SoCon Honor Roll … Competed in all seven tournaments for ETSU and placed inside the Top 10 in four of the seven events … Laid claim to the individual medalist honors at the Bank of Tennessee Intercollegiate – his first individual collegiate victory … Led the Bucs with a scoring average of 71.29 in 21 rounds of play … Was named three-time SoCon Men’s Golfer of the Week and also claimed SoCon Men’s Golfer of the Month … Concluded the season ranked No. 36 in the Golfstat rankings – cracked the Top 25 earlier in the year … Led ETSU in four of the seven tournaments this season … Set a career-low round of 63 in the second round of the Bank of Tennessee Intercollegiate, leading to his eventual medalist performance … Totaled 12 rounds of par or better, including five rounds in the 60s … Was named to the Arnold Palmer Cup Watch List for USA … Played in the British Amateur Championship in the summer of 2019.

2018-19 (Sophomore): Earned all-Southern Conference honors … Represented the Bucs in the NCAA Regional (Stanford) … Named Southern Conference All-Academic List and SoCon Honor Roll … Led the Bucs with a 71.78 scoring average … Played in 12 tournaments … Totaled nine top-25 finishes, including a season-best  seventh-place finish at the Schenkel Invitational … Led the Blue and Gold in three tournaments … Finished with 18 rounds of par or better and seven rounds in the 60s … Qualified for the U.S. Amateur, finishing tied for 10th in stroke play to reach the round of 64 of match play at the U.S. Amateur.

2017-18 (Freshman): Earned a spot on the Southern Conference All-Freshman Team and SoCon Honor Roll ... Played in all 11 tournaments for ETSU ... Ranked 15th in the SoCon in scoring average (73.91), which was also the third-best mark among freshmen ... Led the Blue and Gold at the SoCon Championship by turning in a sixth-place finish, while his top collegiate finish came at his home tournament back in October -- finished tied for fourth at the Bank of Tennessee Intercollegiate with a score of 10-under-par 206, marking the third-lowest score by a Buccaneer in the 20-year history of the tournament ... Registered 10 rounds of par or better during his rookie season, while giving the Blue and Gold 24 countable scores in his 32 overall rounds played.

High School: Rhea is a four-year letterwinner at Science Hill High School where he helped guide the Hilltoppers to back-to-back Region 1-AAA titles in 2015 and 2016. The Jonesborough, Tenn. native is a two-time Big 7 Conference Player of the Year and all-state selection, while earning all-conference honors four straight seasons. Rhea is the reigning East Tennessee Amateur champion, while he claimed medalist honors at the 2015 Knoxville Junior Open.