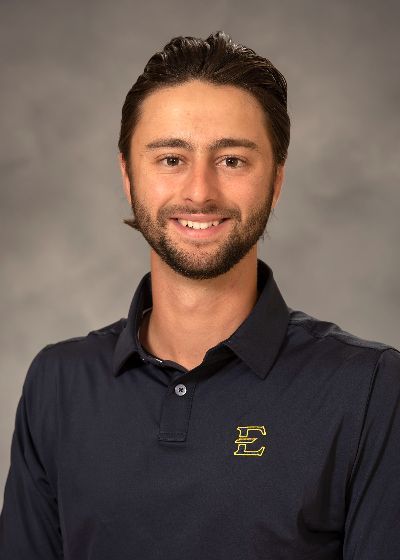 2021-22 (R-Sophomore): Named to the PING East All-Region squad … Landed on the All-SoCon squad for the first time in his collegiate career … Claimed his first collegiate win at the Southern Conference Championship, setting a tournament record and program record with an 18-under-par tournament, firing 198 strokes en route to the win … Claimed a pair of SoCon Player of the Week honors and was named April SoCon Golfer of the Month … Competed in 31 rounds over a span of 11 tournaments, averaging 71.13 strokes per round this season … Tallied four Top-10 finishes on the season, including a third-place finish at the Bank of Tennessee Intercollegiate … Tied a program record for the lowest round with a 63 in the second round of the SoCon Championship (setting a tournament record as well) … Recorded 19 rounds of par or better during the campaign … His 71.13 strokes per round rank eighth all-time in program history … Posted the second-best par-3 scoring (3.00), 13th-best par-4 scoring (4.0421) and 15th-best par-5 scoring (4.7563) in a single season.

2020-21 (R-Freshman): Named to both the SoCon Honor Roll and the SoCon All-Academic Team … Appeared in seven of the 11 events this season for ETSU … Averaged 75.4 strokes per round in his first collegiate season, playing 21 rounds on the year … Finished T-19th at the SoCon Championship for his best finish on the campaign … Carded back-to-back season-low rounds of 69 in the second and third round of the Stitch Intercollegiate … Posted five rounds of par or better, with two rounds in the 60s.

2019-20 (Freshman)*: Named to the SoCon Honor Roll … Did not make any appearances on the season due to ongoing injury.

Personal: Son of Scott Chartier and Ariane Samson … Born Feb. 20, 2001 … Plans to major in journalism … Father played golf at Clarkson University, while his uncle (David Baumritter) played soccer at University of Richmond and his aunt (Kerri Chartier) played field hockey at Skidmore College … Dual citizen of both Canada and the United States.