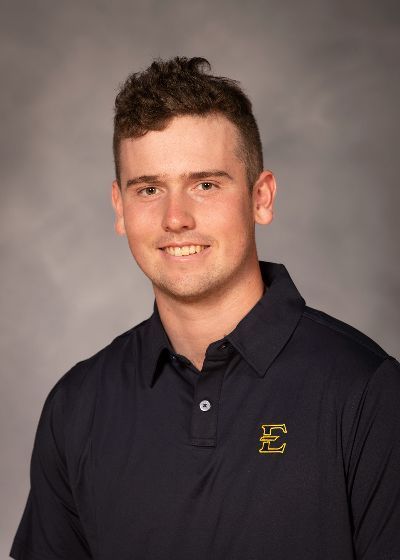 2021-22 (R-Sophomore): Earned a spot as a PING All-American Honorable Mention … Named to the PING East All-Region team for the second consecutive year … Earned a spot on the All-SoCon team for the second consecutive season … On April 19, he was named to the International Palmer Cup Team … Twice named SoCon Golfer of the Week … Led the Bucs in scoring average with a 70.83 mark, ranking sixth-best in a single season in program history … Competed in all 12 tournaments with 36 rounds played and posted seven Top-10 finishes … Claimed the podium at the Hootie at Bulls Bay Intercollegiate for his second career win … Recorded 27 rounds of par or better, ranking fourth-most in a single season in ETSU history … Posted a season-low 65 on two occasions this season, including the final round of the SoCon Championship as the Bucs ran away with yet another title … Recorded an 81.8% finish, ranking 11th best in a single season in program history … Recorded 133 birdies on the year (T-9th) and four eagles (T-14th) … Ranked second in program history in par-5 scoring (4.5703), 11th in par-3 scoring (3.08) and 14th in par-4 scoring (4.0524) … Made the cut in his European Tour debut at the 2021 Cazoo Open in Newport, Wales.

2020-21 (R-Freshman): Named to both the SoCon Honor Roll and SoCon All-Academic Team … Named to the CoSIDA At-Large All-District Team … Became the first golfer in Southern Conference history to win SoCon Freshman and Player of the Year in the same season … Named to both the All-SoCon and SoCon All-Freshman teams … Twice named SoCon Golfer of the Week and Golfer of the Month … Named to the PING Division I East All-Region squad … Picked up his first career victory, claiming the podium at the 2021 Southern Conference Championship with a score of 9-under-par to win by three strokes … Competed in all 11 tournaments for the Bucs this season, leading ETSU to its first NCAA Championship appearance since 2008 … Paced ETSU in six of the 11 tournaments played … Finished the season ranked 89th in the Golfstat rankings … Led the Bucs with a 72.2 scoring average, finishing inside the Top 10 on five occasions, including the Top 5 in three tournaments … Carded a career-low round of 63 (-8) in the second round of the NCAA Cle Elum Regional in Washington, tying the program record for lowest overall score … Posted 19 rounds of par or better on the season, including 10 rounds in the 60s … His 19 rounds of par or better ranked 14th most in a single season in ETSU history … Finished the year with the sixth most eagles in a single season in ETSU history (6), and posted the fifth best par-5 scoring in program history (4.6511) … Named the 2019 Wales Golf Amateur of the Year … Qualified for the 120th U.S. Amateur Championship in the summer of 2020 … Competed in the 2021 British Amateur Championship.

2019-20 (Freshman)*: Named to the SoCon Honor Roll … Appeared in all seven team tournaments for the Bucs, finishing the season as the 19th best freshman according to Golfstat … Ranked as high as 110 during the season, finishing the year with a ranking of 168 … Finished third on the team with a 72.62 scoring average … Recorded his best finish at the Seminole Intercollegiate with a T9 finish … Cracked the Top 10 in two separate tournaments, including finishing tied for 10th at the Bank of Tennessee Intercollegiate … Carded a season-low 65 (-7) in a bogey-free second round at the Bank of Tennessee Intercollegiate … Finished the year with 10 rounds of par or better, including five rounds in the 60s … Earned a spot on the Palmer Cup Watch List for the International team.