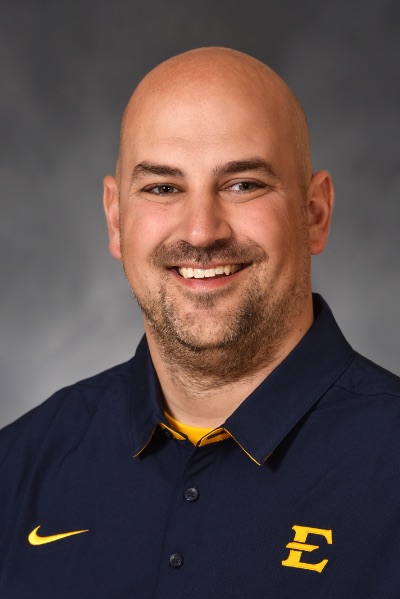 “David Casper brings great integrity, competitive spirit, and a focus on developing the complete young man to this new role as head coach of ETSU men’s soccer,” Carter said. “His success in Division I college soccer has prepared him well to lead our program to championships in the Southern Conference. Dave’s personality and demeanor are an outstanding fit for our ETSU family. I’m so excited to introduce him to our student-athletes, our coaches, our staff and our fans.”

In the second season under Casper, the 2019 Bucs tallied a 8-8-2 record and a 4-2-0 finish in the SoCon before falling in the first round of the SoCon Tournament as the #3 seed against Belmont. With a combined 17-15-3 record in the first two seasons, Casper set a program mark for best record in the first two years as Buccaneer head coach. Under Casper’s tutelage, Josh Perryman was awarded Southern Conference Goalkeeper of the Year after finishing the season with a conference-best save percentage (.778), ranking 2nd in the league with a 1.01 GAA and finishing with 63 saves.

The 2018 season proved to be a positive and nationally-recognized first year of the Casper era, as the Bucs finished with a 9-7-1 overall record and a 4-1-1 record in the Southern Conference for a second place finish. The Bucs were ranked as high as No. 18 in the national RPI rankings — the highest in program history — and as high as No. 2 in strength of schedule out of 206 NCAA D1 programs nationwide.

After placing second in the SoCon and beating 2018 regular season champion Mercer, 2-1, in the last game of the season, the Bucs fell in overtime to Furman in the conference tournament semi-finals. ETSU placed seven players on all-conference teams and led the SoCon in national RPI rankings throughout the season. Facing a challenging schedule, the Bucs faced six opponents that achieved post-season play, including NCAA Elite 8 participant Lipscomb University, who the Bucs beat, 3-1, in regular season play. ETSU also faced ACC and C-USA powers UNC, Wake Forest and Kentucky, as all three programs were ranked in the top five nationally in 2018. The Buccaneers ended the season with a No. 43 national RPI ranking.

Casper also put an emphasis on success in the classroom, as the men's soccer program posted record grade-point averages for the 2018-19 season. The team finished the year with a 3.564 GPA while ending the Spring semester with a 3.68 GPA. Both marks are program bests since beginning in 2008.

“I want to begin by saying how extremely excited I am to be named the next head men’s soccer coach at ETSU,” Casper said upon taking the job in Spring 2018. “It is a dream come true for me to lead a program with as strong a history as ETSU. I want to thank President Dr. Brian Noland, Athletic Director Scott Carter and Senior Associate Athletic Director Mac Hart for entrusting me with this great privilege. I want to also thank Kentucky Head Coach Johan Cedergren, Athletic Director Mitch Barnhart and Executive Associate Athletic Director Kevin Saal for an amazing six years at Kentucky. Without their guidance and leadership, I wouldn’t be here today. I will miss my time in Lexington and the people there, but I am very excited to start a new chapter in my life and to lead this Bucs program for years to come.”

In his 10th season overall as a college assistant, Casper was a key factor in elevating Kentucky into one of the top defensive units in the nation, with the stats from the past four seasons to back it up. Kentucky has finished inside the top-20 in the nation in goals against average in four of Casper's five years on UK head coach Cedergren's staff.

In 2017, Casper coached Callum Irving to arguably the best four-year career in school history. With Casper as his goalkeeper coach Irving set the program’s all-time records in shutouts (27) and goals-against average (minimum 2,500 minutes – 0.86). He was an NCAA All-American and Scholar All-American in 2014 and 2015 as a senior. He was also a two-time Conference USA Player of the Year, Defensive MVP and Golden Glove award winner. In 2016, having to replace the best goalkeeper in the nation, Stuart Ford was an All-Southeast Region selection.

In 2012, Casper, who is the responsible for the goalkeepers on the Kentucky roster, helped lead the UK netminders to the 11th best goals against average (1.21) as well as a tie for the 10th-most shutouts (six) in school annals.

Casper came to Kentucky after three successful seasons as the top assistant coach and goalkeeping coach for Division I Saint Francis University (Loretto, Pennsylvania). During his time at St. Francis, Casper helped guide the club to back-to-back 10-win seasons for the first time in school history. While working with the keepers, Casper helped set the school record for shutouts in a season (11), ranking third in the NCAA in shutout percentage (0.61), sixth in save percentage (.864) and 11th in goals-against average (0.65).

Casper arrived at St. Francis in 2009, helping the club post a win over the seventh-ranked team in the nation. After a year of working with the team, St. Francis had a breakout season in 2010, winning as school-record 11 games and six in conference play. The team finished with a No. 2 final NSCAA North Atlantic Region ranking and the highest RPI in school annals.

Before coming to St. Francis, Casper coached as the primary assistant and goalkeepers coach at William Paterson University (Wayne, N.J.). He assisted in planning and conducting training and assisting with the day-to-day management of the program.

Casper spent two seasons (2004-05) working as the assistant coach and head junior varsity coach at Timothy Christian High School in Piscataway, N.J., where he was responsible for on-field coaching, planning and conducting training sessions. In 2003, he was the head coach at Somerset Christian Academy in Zarephath, N.J.

He has additional experience as a trainer for the N.Y. Red Bulls Regional Development School (2006-08), where he worked with under-14 field players and goalkeepers. In 2008, he was the trainer for Competitive Goalkeeping in Bridgewater, N.J., training a variety of different ages and levels of keepers.

Casper had a standout player career as a goalkeeper at Wheaton College (Ill.) and Messiah College (Pa.). While at Wheaton, he had a 0.63 goals-against average in 2001, with five shutouts. After transferring to Messiah College, he served as the starter on the 2002 Division III National Champions, totaling a 0.40 goals-against average and a school-record 16.5 shutouts. In 2006-07, he served as the starting keeper for William Paterson, posting eight shutouts. Following his collegiate career, Casper had a trial with Independiente de Medellin, in the Colombia First Division.