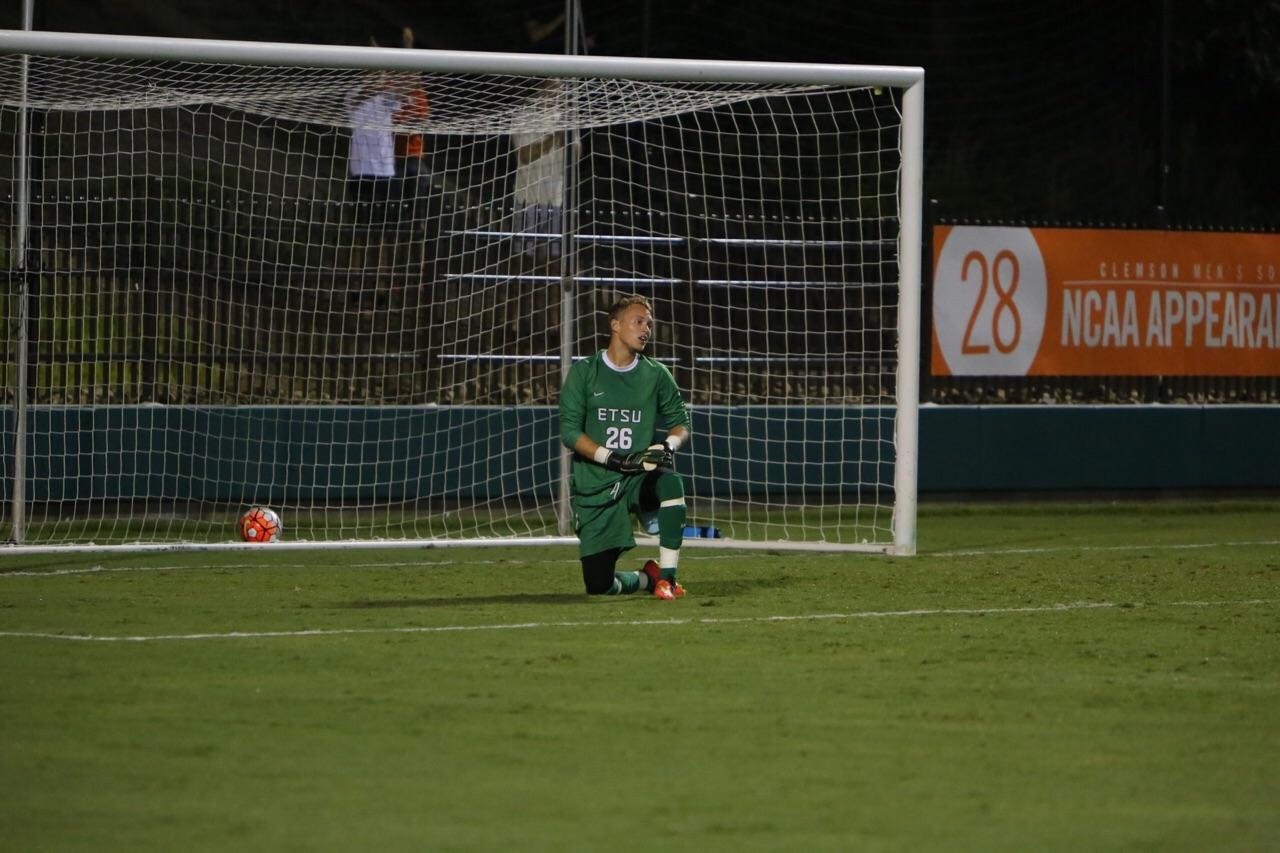 Freshman Jonny Sutherland finished with an eight save night with 22 shots fired by the Tigers.
ETSU led 1-0 at the half, but falters 3-1 at Clemson
ETSU at #8 Clemson | August 28, 2015

JOHNSON CITY, Tenn. (Aug. 28, 2015) – The men’s soccer team led 1-0 at the half but faltered in the second half by allowing three goals within 19 minutes. The Bucs (0-1) suffer their first loss of the season while the Tigers (1-0) picked up their first win. Junior Joao Ramalho led the attack for ETSU with a goal, and freshman Jonny Sutherland gave the Bucs a fighting chance with eight saves on the night.

The first half consisted with a lot of pressure by the Clemson Tiger offense. Clemson held the attack for most of the half. CU had some great shots on goal by sophomore Diego Campos. Campos hasdfour shots with two on goal in the first half. The Bucs defense continued to break up the Tiger attack in the first 45 minutes.

Late in the first half, ETSU had some great looks on goal with Ramalho picking up two shots. His first shot was set up by fancy footwork to get past the Tiger defense. Unfortunately, the shot sailed high over the post. Sophomore Corentin Ohlmann found a hole in the Clemson defense and led Ramlho with a low volley 10 yards away from the net. Ramalho knocked his first goal of the season in the lower right corner of the net. Ohlmann picked up with his first assist of the season with the goal.

The second half was similar in the Tigers plan of attack. Clemson came out strong holding most of the possession while firing a lot of shots on goal. The first Tigers’ goal came in the 70th minute with a shot that found the lower left hand corner. 10 minutes later, Clemson attacker Iman Mafi found himself in the middle of the box, Mafi fired an unassisted goal that found the lower left-hand corner. CU planted the dagger in the 87th minute that came off a save from Sutherland. The ball found Oliver Shannon for the wide-open goal.

“This was a special game for us all today. Joao proved to be a special player in the attack, and he doesn’t care who he is playing even if it’s No. 11 Clemson or a team in the SoCon,” said head coach Bo Oshoniyi. “They were just the better and mature team tonight and exploited our weaknesses. We played for a strong 60 minutes with one of the best teams in the country.”

ETSU did not have a lot of chances on the attack in the game, but when they did, the Bucs made solid shots. Ramalho finished the game with six shots and his one goal in the first half. Graduate James Smith finished his night with two shots with one on goal. Sophomore Chase Clack defended his side of the field and made great plays on the ball. Even though he let up three goals, Sutherland had a strong night in goal in his first career start. He had 22 shots fired at him with 11 shots on goal and 8 saves.

“Clemson was pressing high all night. Our defense stood strong and gave me a lot of shots that I could handle. The defense played well,” said Sutherland. “It was just unfortunate for the score to end this way.”

The Bucs will return home to face off against High Point University on Tuesday, September 1 at 7 p.m. at Summers-Taylor Stadium. The Panthers tied in their first game of the season against UNC-Wilmington 0-0.