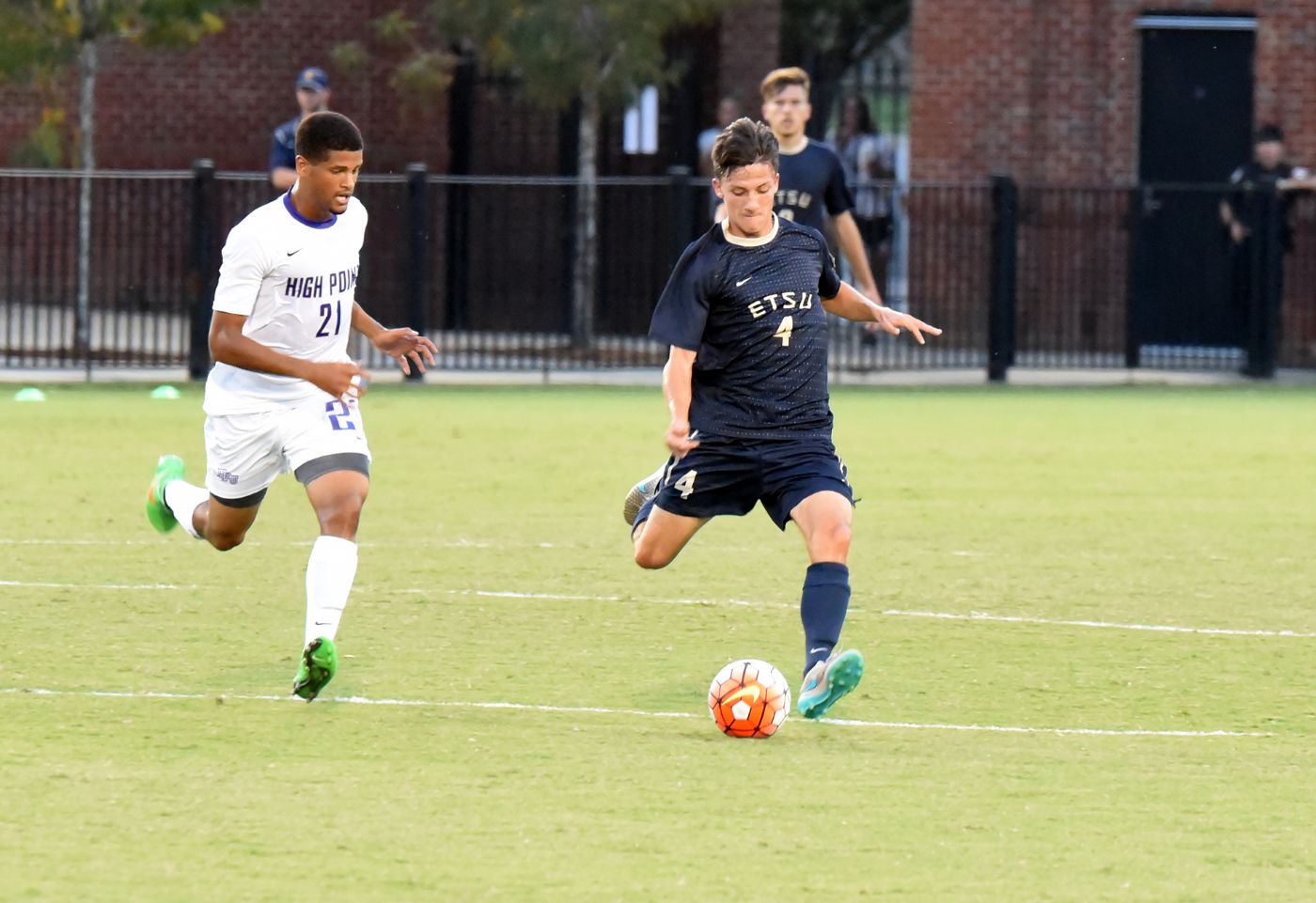 Cameron Woodfin extends the lead to 2-0 with his first goal of the season.
Bucs outscore and outshoot High Point in victory
HPU at ETSU | September 01, 2015
Related Links

JOHNSON CITY, Tenn. (Sept. 1, 2015) – The ETSU men’s soccer team defeated the Panthers of High Point University on Tuesday 2-0. The Bucs defense was impressive as they only allowed five shots, and graduate James Smith (Eastbourne, England) and sophomore Cameron Woodfin (Old Hickory, Tenn.) each picked up their first goals of the season.

The first half was dominated by the East Tennessee State Buccaneers as the defensive back line provided to be impenetrable as they stopped the Panther attack on multiple occasions. HPU attempted just two shots in the first half by Avery Ryan; neither was on goal. The midfield and attackers for the Bucs stayed strong in the first half with nine shots and two on goal. Smith had three of the nine shots.

“Our first half was good. We kept attacking hard, and I am proud of how they played,” said head coach Bo Oshoniyi. “It was interesting to see how the guys would rebound after the Clemson loss, and they showed they could rebound.”

Sophomore Fletcher Ekern (Knoxville, Tenn.) was attacking from the left side of the Panther defense in the 20th minute. After he found a hole in the defense, he was able to cross the ball over to Smith who was able to turn around and put the ball in the middle of the net. This was Ekern’s first assist of the season and Smith’s first goal of the season.

Coming out at the half, High Point came out with a different style of play and proved to be strong for the first couple of minutes. They were able to get some shots off without much luck. ETSU rebounded in the half and increased the pressure on the attack. The Bucs took 11 more shots in the second half with five on goal.

The Bucs had a strong chance to increase the lead when two ETSU players had two open shots at the goal, but the HPU goalie, Kody Palmer, made back-to-back miraculous stops with a fingertip save on the second shot.

ETSU was able to find the back of the net one more time with just 18 seconds remaining on the clock. Junior Mitchell Cecatiello (Pascagoula, Miss.) came from the left side of the box and took a strong shot on goal but was blocked. The rebound came to Woodfin who put some curve on the shot that found the lower right hand corner of the net. This was their first points of the season.

“I was just waiting to get my opportunity out on the field. I was just in the moment when the ball came to me when I had an open chance at goal,” said Woodfin. “This game was a big confidence boost especially after Clemson. It is definitely better to be 1-1 and move on to our next opponent.”

High Point finished the game with just five shots with one on goal. Junior Joao Ramalho (Monte Santo, Brazil), senior Henrique Novaes (Vinhedo, Brazil), and Smith all combined for 12 shots with four on goal in the matchup.

East Tennessee State will travel to undefeated Radford University (2-0) on September 5. The match is set for 6 p.m. in Radford, Va.