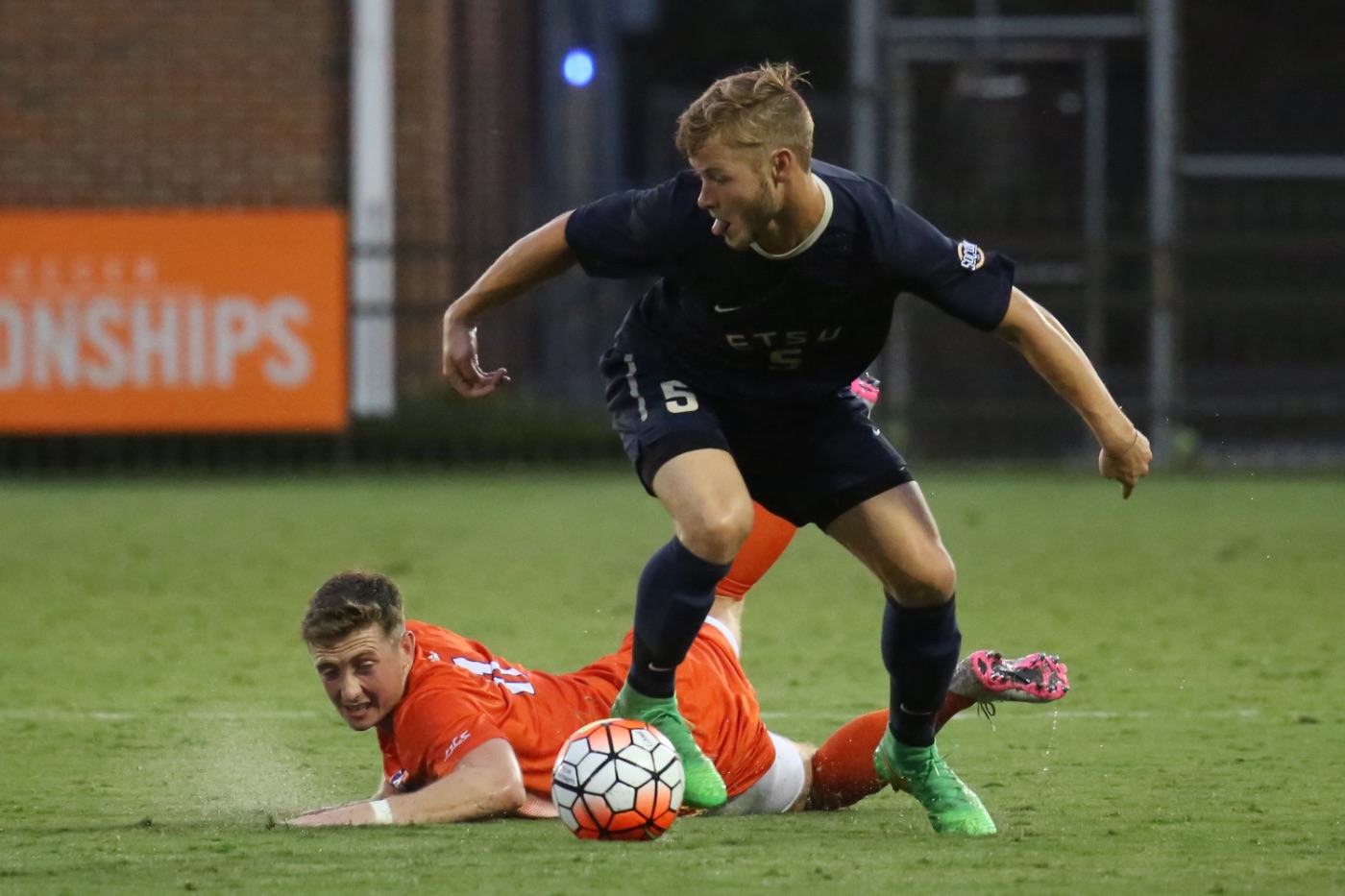 JOHNSON CITY, Tenn. (Sept. 5, 2015) – The Buccaneer men’s soccer team played in two overtime periods and finished in a 1-1 tie Saturday night at Radford University. The Bucs scored first for the third straight game with a goal by Luke Parker (Memphis, Tenn.) in the 57th minute, but ETSU could not find the net again after the Highlanders tied the game.

The Bucs started the game slow with the Highlanders controlling most of the possession. Radford led in first half shots with 12 shots and six on goal. ETSU could only tally seven shots in the first half with just four on goal. Most of the ETSU shots came within the last couple of minutes of the first half. One of the better opportunities came in the 43rd minute with a strike from the left side. The shot was blocked, but the rebound fell to Parker. Unfortunately, the ball was stolen away from Parker as the RU goalie was trying to get to his feet after the save.

After coming out at halftime, the Bucs started to gain some momentum. They were able to take some shots with most on goal. Just eight minutes in the second half, Joao Ramalho (Monte Santo, Brazil) found himself on the right side of the field. He crossed the ball to Parker who was able to net his first collegiate goal in the top section of the goal. This was Ramalho’s first assist of the year, and he leads the team in points with three.

However, Radford retaliated just over a minute and a half later to tie the game. The Highlander, Michael Walsh, gave the ball to Evan Szklennik inside the box. Szklennik was able to volley the ball off to teammate, Finn Tiedemann, who was able to score his second goal of the season in the right side of the net.

The game finished with open opportunities from both sides, but neither was able to find the back of the next.

Heading into the first overtime, Radford took several shots early but with no luck. Parker found himself with the best chance for the Bucs with a shot in front of the goal, but a Highlander defender blocked the shot.

ETSU and RU couldn’t find the net in the first overtime, and the second overtime was not any different. Radford appeared to have more energy than the Bucs as they attempted two shots in the second overtime. The East Tennessee State defense was able to kick the ball away when the Radford attack was strong.

The Highlanders outshot the Bucs in the overtime periods 5-1. Jonny Sutherland (Chester, U.K.) finished the game for ETSU with seven saves. James Smith (Eastbourne, England) was second on the team with three shots.

“This Radford team was 11-0 last year and won the Big South regular season, and they returned everyone from last year’s team. To come into a tough environment and get a result is great, said head coach Bo Oshoniyi. “Jeff George (Safety Harbor, Fla.) was a beast in the second half. Last year we would have crumbled under the pressure and lost this game 3-0. I am really proud of these guys!”

The Bucs will continue on the road as they face Appalachian State (0-1) on September 9 at 7 p.m. The Mountaineers have not played a game since August 28 due to a canceled game on August 30 against Jacksonville University.