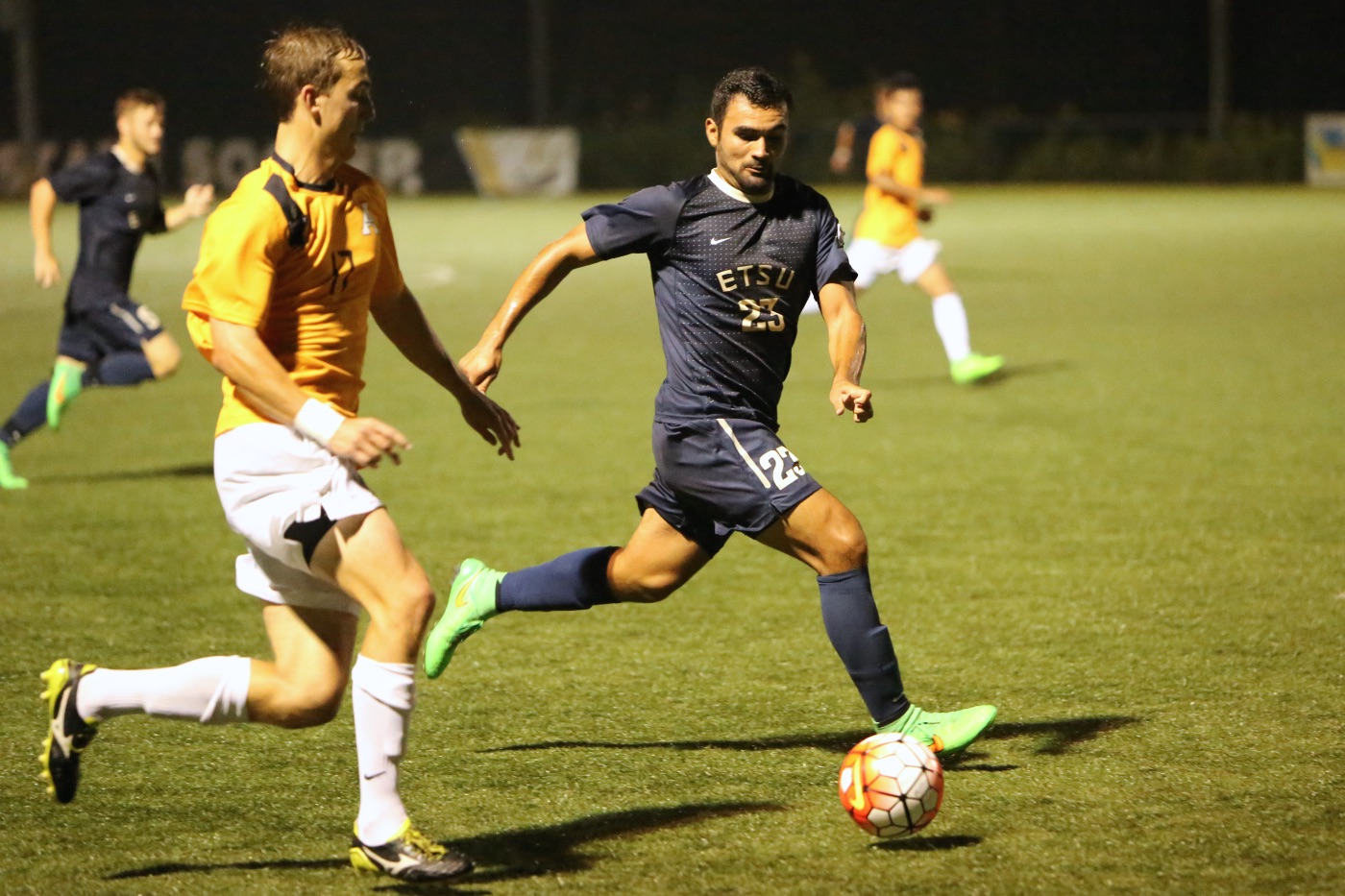 JOHNSON CITY, Tenn. (Sept. 9, 2015) – The ETSU men’s soccer team fell in Boone, N.C. Wednesday night 2-1 against Appalachian State University. The Mountaineers came out with strong shooting as they netted two goals in the first half. ETSU could only retaliate with a goal by sophomore Fletcher Ekern (Knoxville, Tenn.) in the 67th minute. The Bucs drop to 1-2-1 on the season as the Mountaineers move to 1-1.

ASU had most of their success in the first half as they fended off several ETSU attacks. Both of the Mountaineer goals came in the first half with the first goal just 12 minutes in the game. Alex Herbst took the corner for App. State, which fell to Raheem Somersall. Somersall dished it off to Stephen Chapman in the middle of the box for the easy goal.

The second goal came late in the first half, just five minutes remaining. Sophomore Gabe Saavedra (Guaduas, Colombia) was called with a foul inside the box and awarded the Mountaineers with a penalty kick. Freshman Jonny Sutherland (Chester, UK) guessed wrong and gave Chapman his second goal of the game and his third of the season.

Appalachian State led in shots with six and five on goal. ETSU was only able to get three shots off with one on goal by freshman Davor Milanko (Split, Croatia).

“15 to 20 minutes into the game we had missed opportunities to go ahead. I think we just got away from our game plan in the first half and never returned to it,” said head coach Bo Oshoniyi.

The second half brought different intensity for the Bucs as they controlled a lot of the possession in the half. ETSU was able to get off seven shots to the Mountaineer two. The Buccaneers were able to place one in the back of the net in the 67th minute. Sophomore Cameron Woodfin (Old Hickory, Tenn.) had a defender on his back just outside of the box when he kicked the ball behind his back to teammate Ekern. He then took the shot from the left side and scored his first goal of the season.

“Cam flicked the ball back to me with a one-touch pass. I took the shot with my left foot and was able to get it in the bottom left corner,” Ekern said.

The Bucs had many more opportunities to tie the game, but one of the best opportunities came with just 15 seconds left in the game. A free kick was awarded to ETSU from just outside of the box. The Bucs had four different players lineup to keep the Mountaineers on their toes of who would take it. Ultimately, Milanko took the free kick, but his kick sailed to the right. The goalie for Appalachian State kicked the ball high into the air to seal the 2-1 victory for the Mountaineers.

“One of the biggest obstacles to overcome was adjusting to the astroturf. It unfortunately took us a half to get adjusted but when we did, we brought the intensity on the field,” said sophomore Chase Clack (Memphis, Tenn.).

The Bucs controlled most of the possession in the second half by holding the ball in the Appalachian State side of the field.

“We were able to get behind the App. State defense easier. We had many chances but a lot of our shots just didn’t have any power on them. We also found ourselves in good positions on the field and had a lot of set pieces,” said Ekern

East Tennessee State men’s soccer return home after their 0-1-1 road trip. The Bucs will face the number 9th ranked Kentucky Wildcats on September 16 at 7 p.m. in Summers-Taylor Stadium. This game is also the International Day of Peace game.

“We are going to get ready for Kentucky now that we have a week off to get healthy,” said Oshoniyi.

“It will be awesome to bring home a big name school to our campus. We have shown we can play against high caliber teams like Clemson. We just need to play our game,” Clack said.