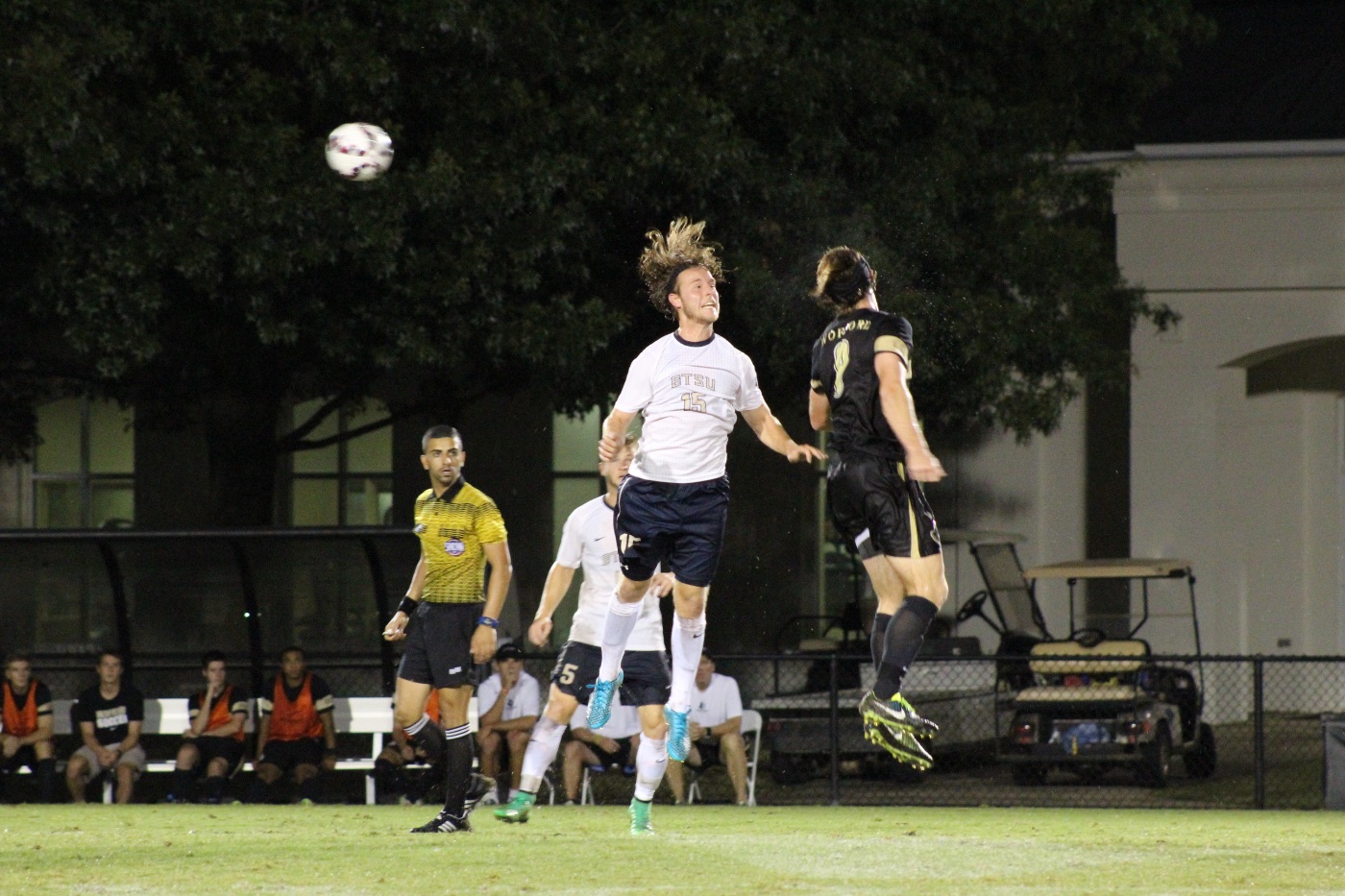 JOHNSON CITY, Tenn. (Sept. 29, 2015) – The ETSU men’s soccer team fell in their first Southern Conference game 3-2 in two overtime periods to Wofford College. The Bucs held a two-goal lead at the half but surrendered three straight goals to start their conference play.

The Bucs started off hot as they scored the first two goals of the game. Head coach Bo Oshoniyi said before the game he wanted to attack within the first 15 minutes of the game, and the team did just that. Graduate forward James Smith (Eastbourne, England) got tangled up with a Wofford defender inside the box and was awarded a penalty kick. He made the goalie guess wrong and gave the Bucs a 1-0 within six minutes of the match.

This was Smith’s third consecutive game scoring a goal and has back-to-back games with penalty kick goals.

The attack for East Tennessee State did not end there as sophomore Fletcher Ekern (Knoxville, Tenn.) scored his second goal of the season in the 29th minute. He fooled several defenders on the right side of the box and was able to get a strong shot off about 15 yards out. He knocked in the second goal of the game in the bottom left hand corner of the net.

ETSU kept their 2-0 lead at the half. The team led in most offensive categories in the first half as they outshot the Terriers 9-7 with 4 shots on goal. Goalie, Jonny Sutherland (Chester, UK), corralled two saves in the first half.

“We came out great in the first half. That was the best I have seen the team play in any half so far this season,” Ohoniyi said. “We had the opportunity to score possibly three or four goals.”

Wofford and ETSU came out of the half with a balanced attack on both sides. However, the Terriers netted their first goal in the 69th minute. Connor Donohue cut the lead in half by putting the ball in the right side of the goal. The Terriers then answered just seconds later with a penalty kick, and Matthew Aurendnik took the shot and scored his fourth goal of the year.

The 2-2 score stayed the same till the end of regulation, and the match ended up going into overtime.

The first overtime favored Wofford as they took two shots in the 10-minute period. The Bucs had several opportunities. One of the best chances came late in the first overtime as Mitchell Cecatiello (Pascagoula, Miss.) took several shots from the right of the field, but they did not find the back of the net.

The second overtime period came to an end quickly. Wofford was awarded their seventh corner of the game, when Connor Davis took the header into the left side of the net.

ETSU still outshot their opponent 19-17 at the end of the game. Cecatiello had the best shot on goal percentage for the Bucs as he took three shots with two on goal. Ben Holt (Knoxville, Tenn.) tallied two shots with one on goal.

The Bucs fall to 3-3-1 and 0-1 in conference play. Wofford moves to 6-1-1 and 1-0 in conference play. ETSU will return home to face conference foe VMI on Friday, Oct. 2 at 5 p.m. The match will be held at Summers-Taylor Stadium and will be the Bucs first home SoCon match of the season.

“The guys put everything they had into today’s game. There was a lot to learn from today, but we will make it up as we continue our conference schedule. This game is something to build on,” said Oshoniyi.