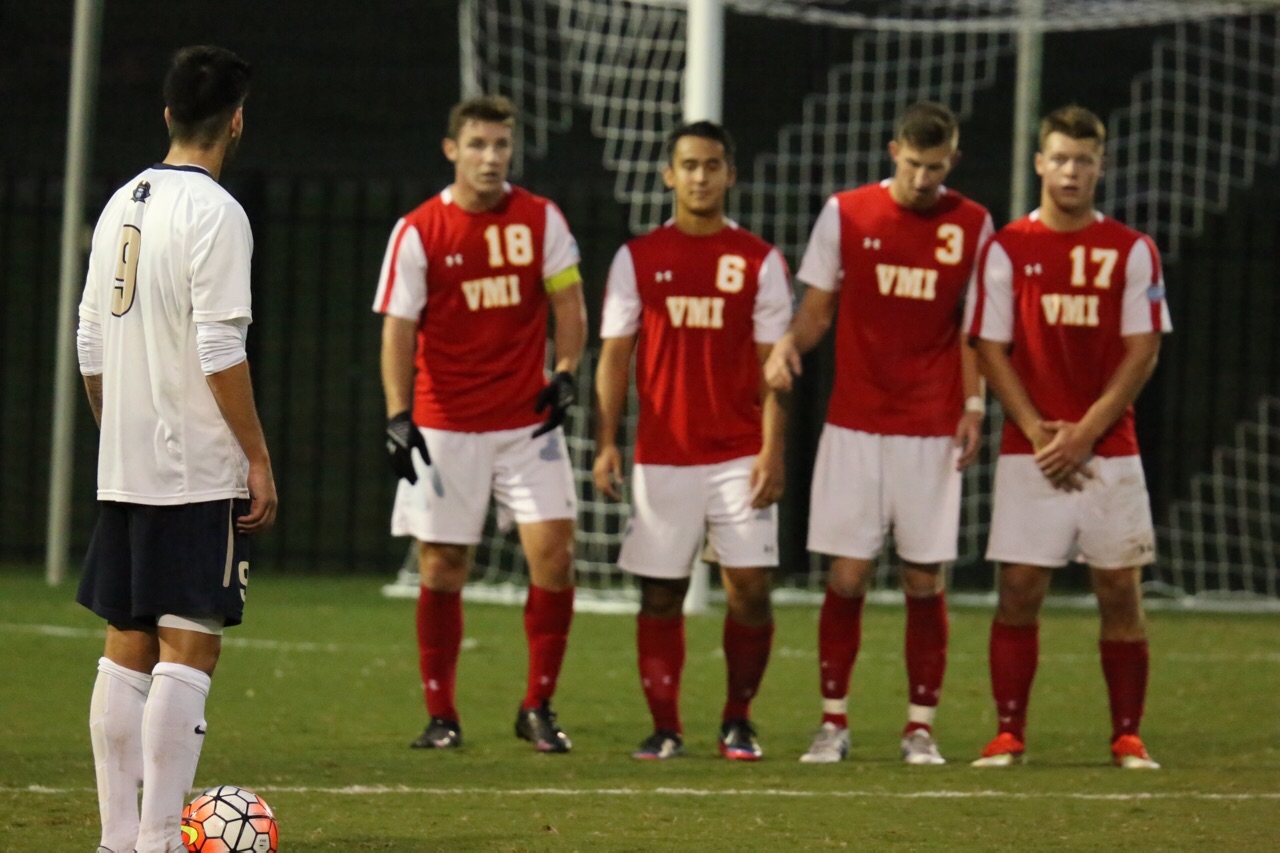 Christian Ilia has a strong game as he tallied a goal and an assist versus VMI.
Ilia nets game-winner in overtime nail biter
VMI at ETSU | October 02, 2015
Related Links

The Bucs worked quickly against the Keydets as ETSU maintained most of the possession in the first half. Fletcher Ekern (Knoxville, Tenn.) scored the first goal of the match for ETSU. VMI fouled a Buccaneer about 25 yards from the goal. Ekern took the free kick and put fancy curve on the shot to put the ball in the right side of the box. That goal was scored just 14 minutes into the game.

VMI was able to tie the game at one in the 28th minute. David Wright took the free kick for the Keydets where he mimicked Ekern’s goal by putting his shot in the back of the net.

The Bucs and Keydets went into halftime tied at one. However, ETSU led in most offensive categories in the first half. The Bucs outshot VMI 14-2 with 6-2 on goal.

"I have to give credit to VMI for holding on and stayng in the game. We have all been in games when you have maintained most of the possession while creating chance after to chance to score but just can't. I think we hit every post out on the field," said head coach Bo Oshoniyi.

ETSU came out with multiple offensive attacks in the first couple of minutes, as the Bucs were able to get off six shots in the first 15 minutes. However, VMI’s Grant Austin scored the go-ahead goal in the 64th minute. Sohrab Shaikh took the cross for the team from the right side. Goalkeeper, Jonny Sutherland (Chester, UK), made the easy save, but Austin found the rebound and put the ball in the open net.

VMI led 2-1 up to the 85th minute. Ilia set up Cecatiello in the right side of the box about 16 yards out from goal. Cecatiello dribbled the ball more towards the middle of the box and took a shot with his left foot. His shot was able to curve back into the net to tie the game at two.

Regulation time ended with a 2-2 tie as the Bucs and Keydets headed into overtime. ETSU has gone back-to-back games with overtime periods.

The second overtime period did not last long as Ilia scored his first goal of his collegiate career. Just three minutes into the session, James Smith (Eastbourne, England) took the Bucs’ first corner of the overtime period. His kick sailed to Gabe Saavedra (Guaduas, Colombia) who put a strong attempt on goal, but his shot hit the right post. Ilia found the rebound amongst several defenders and snuck the game-winning goal in the middle of the goal.

This was Ilia’s best game of the year as he tallied a goal and an assist in the match. ETSU outshot VMI 32-4 with 11-4 being on goal.

"In the end, we showed great resolve to find a way to get three points. Any win in the SoCon is a great win. We will tighten up some things on offense and defense, and we will get ready for a tough road match against UNCG," Oshoniyi said.

The Bucs move to 4-3-1 overall and 1-1 in conference as VMI falls to 0-10 overall and 0-2 in conference. ETSU will hit the road for another Southern Conference matchup against UNC-Greensboro at 7 p.m. on October 6 at UNCG Soccer Stadium.