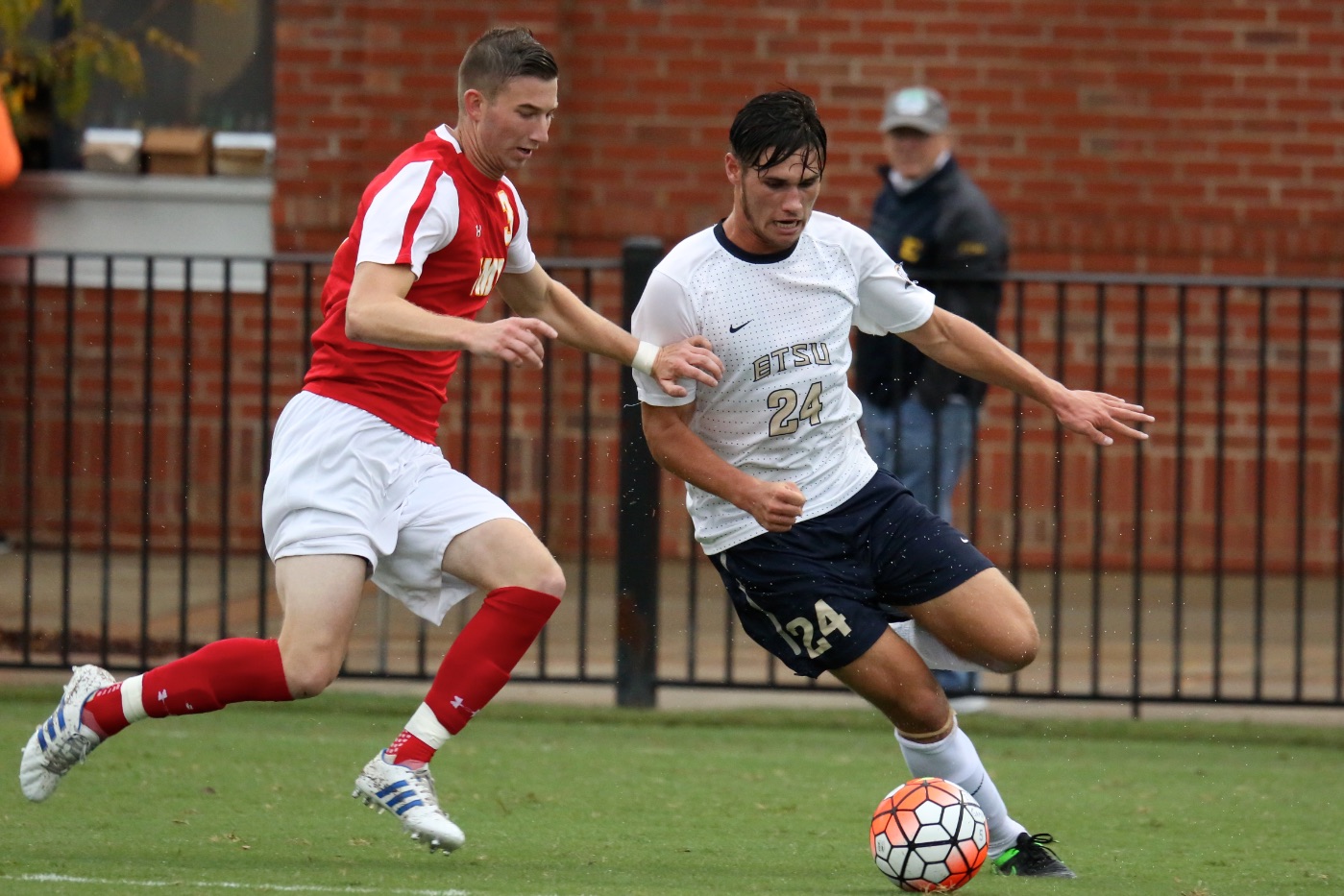 Greensboro, N.C. (Oct. 6, 2015) – The ETSU men’s soccer team ended in a 1-1 tie against UNCG on Tuesday after going into another double overtime in Greensboro, N.C. This is the Bucs' third straight game that resulted in double overtime matches. Fletcher Ekern (Knoxville, Tenn.) tied the game up in the 80th minute after the Spartans led for almost 71 minutes.

The first goal of the game favored the Spartans as UNCG attacked quickly in the first 10 minutes. UNCG was able to get a strong shot off in the eighth minute by Jordan Poarch, but freshman goalkeeper, Jonny Sutherland (Chester, U.K.), made an excellent save to end the immediate threat. The Spartans were awarded their second corner of the game after the save, and UNCG made the Bucs pay. Leeroy Magurashe took the corner and added nice loft to Damieon Thomas. Thomas took the pass and placed the header in the right side of the net to gain the early 1-0 lead.

The rest of the first half did not have many shots. The Bucs and the Spartans only took a combined total of nine shots in the first half. ETSU had four of those shots with just one on goal by Christian Ilia (Norrkoping, Sweden). Ilia’s shot attempt came with just seconds left on the clock, but the UNCG goalie saved the shot on goal.

Right at the start of the second half, the Bucs looked like a different team as they maintained most of the possession early. ETSU attempted eight strong shots on goal until one happened to find the back of the net in the 80th minute.

Holt worked quickly after a free kick was given to ETSU. He worked up the right side when he lofted a long pass to the middle of the box. Cameron Woodfin (Old Hickory, Tenn.) was the first to meet the pass, but after some great communication between himself and Ekern, Woodfin let the ball slide by to Ekern. With the goalie caught off guard, Ekern netted the easy goal in the left side of the net. This was Ekern’s fourth goal of the season and Holt’s first point of the year.

The Bucs attacked strong after the first ETSU goal. Ilia maintained possession of the ball and took a shot on goal, but his attempt was blocked. James Smith (Eastbourne, England) found the rebound and took a strike on goal, but the Spartan goalie made a diving save to end the attack.

The Spartans tried to score the game-winning goal with five minutes left. Moises Gonzalez was able to get past the ETSU defense and put a strong shot on goal, but luckily, the shot hit the cross bar.

After that scare, the Bucs and Spartans were content with going to overtime. This was the third straight overtime game for ETSU.

UNCG controlled most of the first overtime possession as they attempted a shot just a minute into the period. The shot, however, sailed wide. The Spartans took two more shots and had three straight corners in the first OT, but the Bucs defense was able to fend it off.

The best chance for the Bucs to end the game came with 13 seconds left in the first overtime. Chase Clack (Memphis, Tenn.) cleared the ball, which even cleared the UNCG defense. However, Ekern chased the ball down and snuck behind the Spartan backline. He took a shot on goal, but his shot went just high and hit the crossbar, which is how the first overtime would end.

The second overtime period almost came to an early end as Henrique Novaes (Vinhedo, Brazil) had the opportunity for the header in front of the goal, but his attempt sailed just to the right in the 102nd minute.

The game changing moment in the game came in the 108th minute. ETSU was fighting off a strong Spartan attack but the referees called a foul on an ETSU player in the Buccaneer box. Just about when all hopes vanished for the Bucs, Magurashe took the penalty kick and hit the post to end threat. This was the first time an opponent had not scored on a penalty kick against the Bucs this season. Both teams attempted one last shot in the remaining time, but neither team would score.

ETSU has not been able to get a win on the road but have been able to tie two strong teams on the road: Radford and UNCG. The Bucs last three games have averaged 105 minutes played in those games. ETSU moves to 4-3-2 and 1-1-1 in conference as UNCG goes to 5-4-2 overall and 1-1-1 in SoCon play.

The Bucs look to get a second victory in conference play as they host the Mercer Bears on Oct. 10th. The match is set for 7 p.m. at Summers-Taylor Stadium.