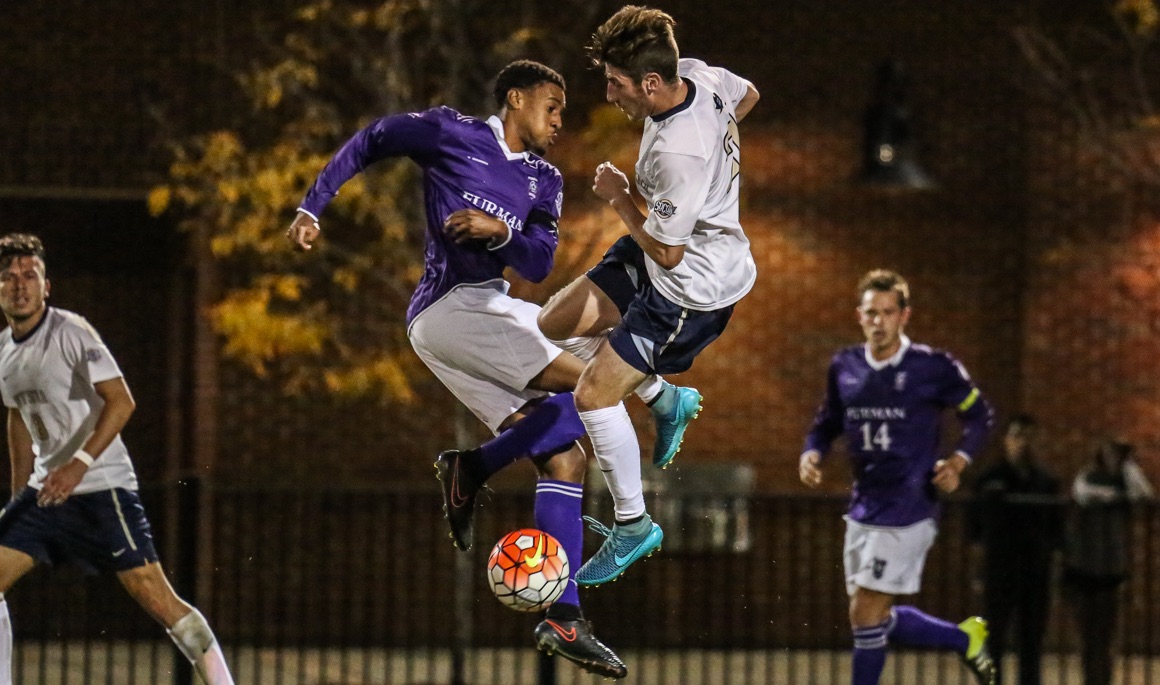 Johnson City, Tenn. (Oct. 13, 2015) – The ETSU men’s soccer team fell at home on Tuesday to the Furman Paladins 2-0. Furman jumped out to a 1-0 lead in the 11th minute and never looked back, but ETSU had several chances on goal as they took 15 shots to Furman’s eight.

The first goal of the game came early for the Paladins due to a Buccaneer miscue. Furman had a great chance at goal from the left side as Lewis Hawke took his first and only shot in the match. Freshman goalie, Jonny Sutherland (Chester, U.K.), saved the shot attempt, but the ball got away from the young goalie and sat right in front of the ETSU goal unattended. Josiah Baker of Furman rushed to the ball and beat every Buccaneer for the easy 1-0 lead. Those were the first two shots of the game for the Paladins.

ETSU took the next six shots and had two of those saved by the Paladin keeper. The Bucs had several chances to even the match at one before going to the half, but couldn’t find the back of the net. The Buccaneers found themselves outshooting the opposition at the half 8-4 with 4-4 on goal. In the first half, the goalies for both teams had seven combined saves.

The second half was dominated by ETSU as they took five shots within the first 20 minutes of the half. One of the best chances came with back-to-back corner kicks taken by graduate student James Smith (Eastbourne, England). The first attempt was defended well but was kicked out of the backline for another ETSU corner kick. Smith took the second try and was able to find junior Mitchell Cecatiello (Pascagoula, Miss.), but his shot ultimately sailed left and ended the attack.

The Bucs did not fold over as they attempted several more attempts on goal with no luck. The Paladins were able to extend the lead in the 83rd minute when both teams were tangled up in the ETSU box. The referee called a foul on the Buccaneer defense and awarded Furman a penalty kick. Adrian McInnis took the shot and put it in the left side of the net for his first goal of the season.

“We are taking care of the ball offensively, and unfortunately it isn’t falling our way. I have no doubt the scoring flood gates will open soon. I am confident in this group of guys to score goals,” said sophomore midfielder Jeff George (Safety Harbor, Fla.). “It is a mentality thing right now. We are finding ourselves at the bottom of each match when we know we can beat these teams. We need to play the full 90 minutes instead of parts of the game.”

“We need to take our chances and have better composure as well. We need to finish our chances, and it seems like every team finds a time when goals dry up. However, I know we will get back to scoring goals again,” said head coach Bo Oshoniyi. “The boys are giving everything they have. There are some breaks that aren’t going our way. We have to find a way to get results especially dropping two at home.”

ETSU was not able to take another shot after Furman gained the 2-0 advantage.

The Bucs fall to 4-5-2 overall and 1-3-1 in SoCon play, and Furman regains the top spot in the conference with their 4-1 record in SoCon matches.

East Tennessee State will hit the road for their third SoCon round trip this season. They will square off with the VMI Keydets on Oct. 17 at 2 p.m in Lexington, Ky.