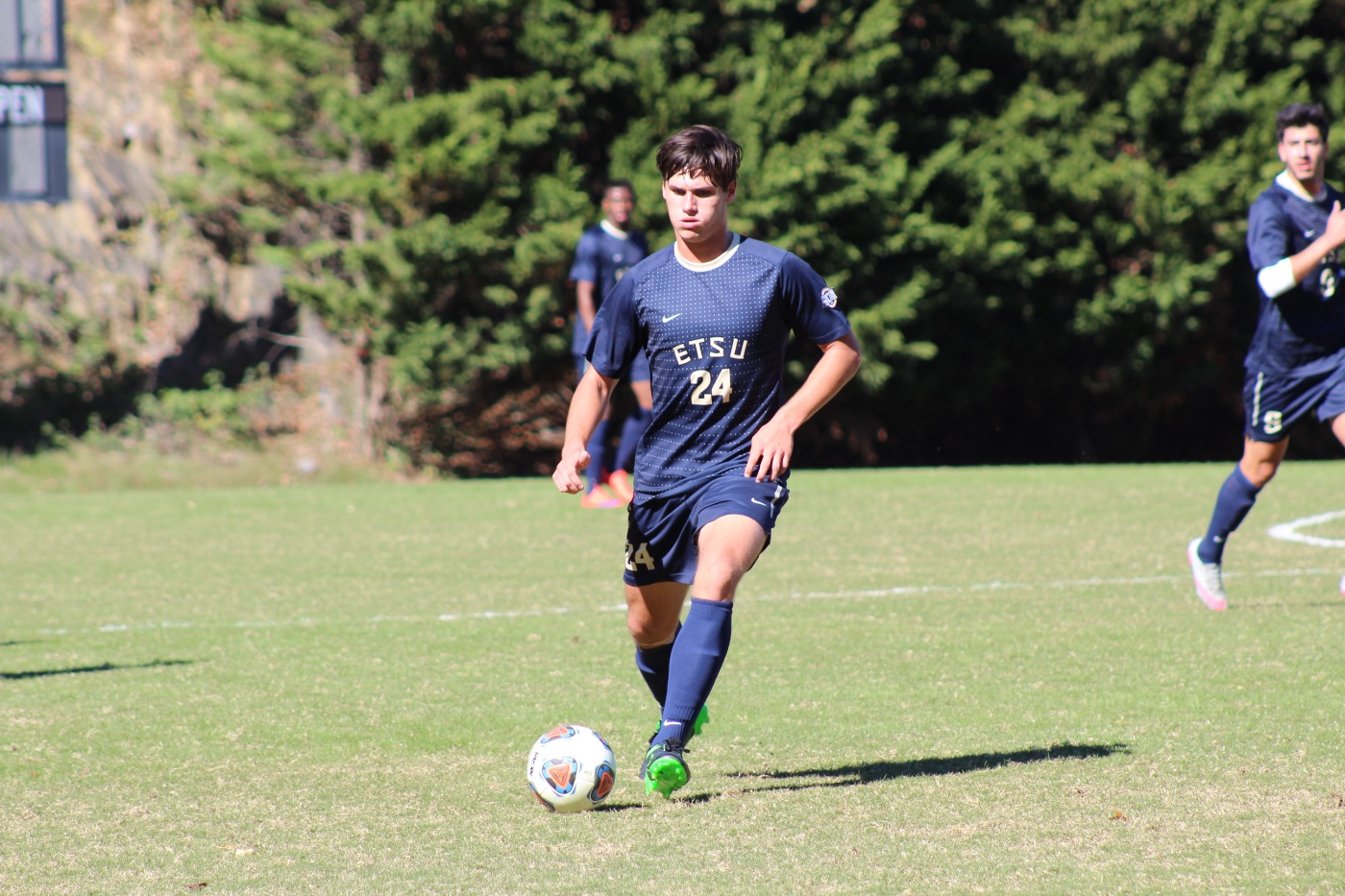 Lexington, Va. (Oct. 17, 2015) – The East Tennessee State University Bucs got back into the win column after pitching a 3-0 shutout on Saturday against Virginia Military Institute. Fletcher Ekern (Knoxville, Tenn.) played a part in all three goals today as he scored twice and assisted in one. The Bucs move to 5-5-2 overall and 2-3-1 in conference play, and the Keydets fall to 0-14 overall and 0-6 in conference.

The first goal came in the 16th minute by Joao Ramalho (Monte Santo, Brazil). This was Ramalho’s first full game in the past couple weeks for the junior. ETSU was working up the right side on the attack when Ekern knocked the ball to Ramalho in front of the goal. Ramalho beat the goalie and netted the easy goal to take the 1-0 lead.

The Bucs and Keydets were fairly even for the rest of the half as ETSU outshot VMI 5-2 at the half with 2-1 on goal. Christian Ilia (Norrkoping, Sweden) led the team with two shots, and Ekern and Ramalho each had one shot on goal.

ETSU came out firing in the second half as Ekern scored the second goal of the game in the lower right corner. Ben Holt (Knoxville, Tenn.) took a cross from the right side of the field, and Ekern corralled the ball and took the first shot of the second half in the 49th minute. His ball snuck past the VMI goalie to move the lead to 2-0.

However, Ekern did not stop there. Five minutes later, Ilia worked up the left side of the field when he passed the ball to James Smith (Eastbourne, England) in front of the net. Smith passed it off to Ekern who put the ball in the middle of the goal to advance the score to 3-0 in the Bucs' favor.

“It was just having the right mindset coming out today and to get the season rolling again like we were in the beginning of the season. This win gives us a lot of confidence especially with Wofford coming up on Tuesday,” said Ekern.

The starting backline for the Bucs, Yera Sissoko (Troyes, France), Chase Clack (Memphis, Tenn.) and Sam Sevigny (Quebec, Canada) stood strong as they shutdown the Keydet attack. VMI wasn't able to get a clean shot on goal and stood tall.

The Bucs ended the game outshooting the Keydets 13-8 with 8-3 on goal. ETSU finished with a 62 shot on goal percentage, which is one of the highest this season. Ekern gains the lead for the most goals on the team with six and also in points with 14. Smith moves to second on the team with 12 points and leads the team in assists with four.

“We need to keep the same mindset from today going forward for the rest of the season. We don’t need to concede any goals or set pieces to give them the upper hand, and we should be able to come out with a victory,” Ekern said.

ETSU returns home for their second-to-last home game of the season. The Bucs will square off against the Terriers at Summers-Taylor Stadium on Oct. 20 at 7 p.m. Wofford is currently 8-3-1 overall and 3-2 in the SoCon. The Terriers play tonight against Mercer at 7 p.m in Spartanburg, S.C.