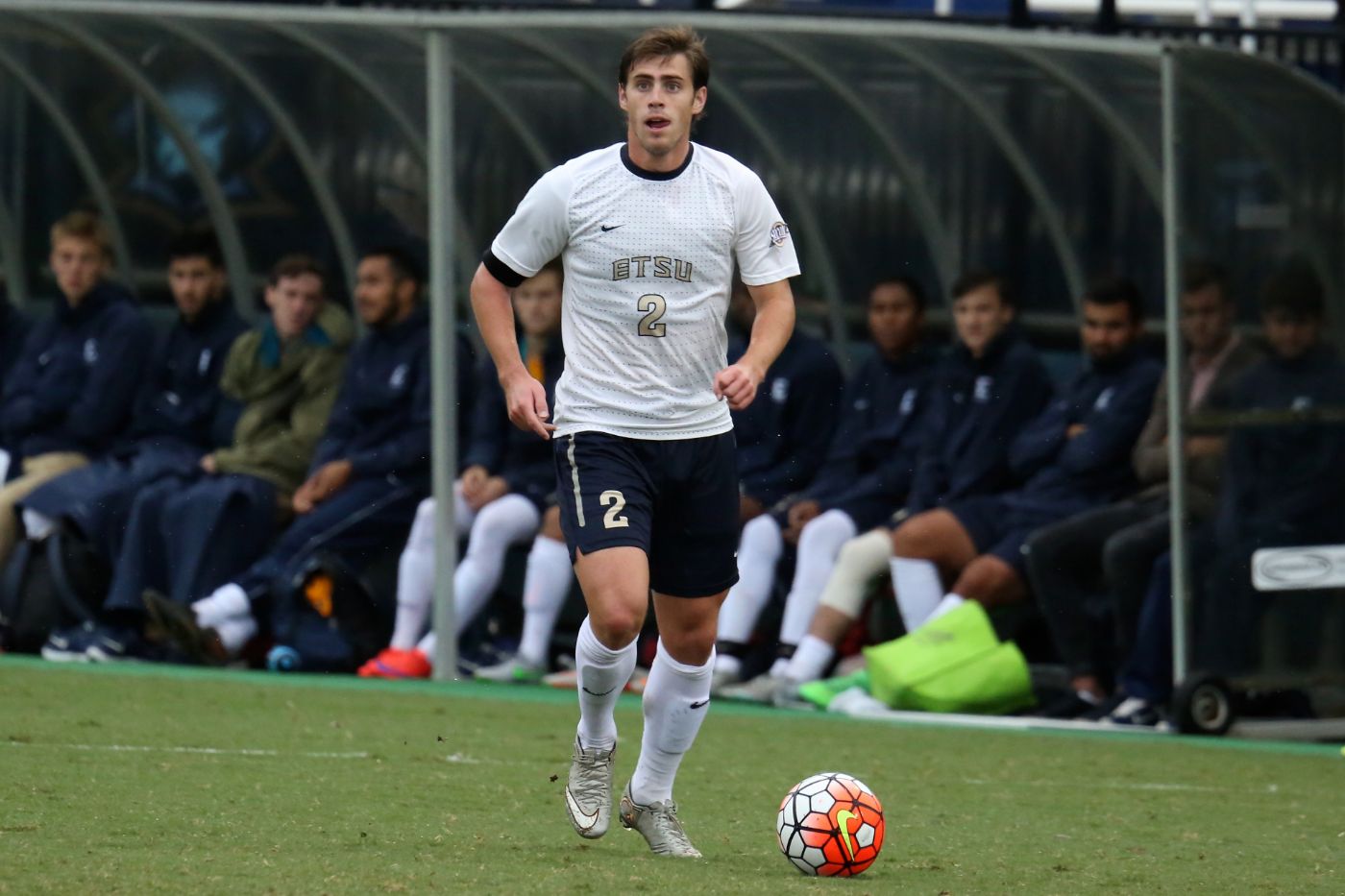 Ben Holt scored his first goal as a Buc against Wofford and finishes with two goals in the game.
Bucs come back twice in 3-2 victory
Wofford at ETSU | October 20, 2015
Related Links

The first minute of the game was not how the Bucs drew it up because Wofford struck at the one minute mark. The Terriers worked up the left side and after a cross, Matthew Aurednik tapped the ball past the ETSU keeper, Jonny Sutherland (Chester, U.K.). ETSU fought back quickly as they attempted three shots in the next 14 minutes.

The best chance to tie the game up came in the 20th minute after ETSU was awarded a penalty kick. James Smith (Eastbourne, England) took the kick and went left with his shot, and unfortunately so did the Wofford goalie as he saved the ball and ended the chance for the Bucs to tie the game.

The Bucs did not put their heads down because just four minutes later, ETSU found the back of the net. Mitchell Cecatiello (Pascagoula, Miss.) took a shot from the left side of the net, but his shot was blocked by a Wofford defender. However, the deflection found Smith from about 20 yards out, and Smith took a shot and scored the first goal for the Bucs.

ETSU extended their lead in the 38th minute as Holt netted his first goal as a Buccaneer. Henrique Novaes (Vinehedo, Brazil) dished the ball off to Holt within the box, and Holt connected with the ball to find the back of the net.

The Buccaneers went into halftime with a narrow lead of 2-1, but the Bucs led in shots taken with 12-3 with 5-1 on goal. Smith led the team with shots taken with five and two one goal. Joao Ramalho (Monte Santo, Brazil), Cecatiello, and Holt each ended the first half with one shot on goal.

Coming out of halftime, the game was very one-sided as the Terriers attempted shot after shot. Wofford had five shots within the first ten minutes of the second half and three corner kicks. However, the ETSU defense stood tall and fended off every attack. Sutherland saved two of the five shots in that ten minute span.

Wofford was able to knot the game back up after they were awarded with a penalty kick. The Terriers took a cross from the right side, but the Buc defense was caught with a handball in the box. Aurednik took the penalty kick and made Sutherland guess wrong to tie the game at two in the 69th minute.

After tying the game, the Bucs worked quickly the opposite way, and Cameron Woodfin (Old Hickory, Tenn.) found himself and Holt at a two-on-one advantage on the attack. Woodfin dished the ball off to his right from just a couple yards outside of the box. Holt took the pass and beat the keeper one-on-one by knocking the ball in the lower left-hand corner of the Terrier net to move the score to 3-2.

After the Bucs pulled ahead, Wofford had a couple of chances to tie the game with two shots and three corner, but the Bucs defended the attacks off nicely.

“It was a lot of fun getting my first goal as a Buc. Novaes played a great ball to me, and I just happened to be at the right place at the right time to be able to score,” said Holt. “This was a huge win for us today. After losing to Wofford at the beginning of the season, it gave us a bitter taste in our mouths, and after losing to Furman, we became dedicated to win the conference.”

ETSU outshot the Terriers 19-11 with 9-4 on goal. Fletcher Ekern (Knoxville, Tenn.) ended the game with six shots and three on goal. Holt went a perfect two-for-two night with two shots and two goals. Sutherland had two saves in the match, which came in the second half.

“We knew from the get-go they would work fast. We weren’t expecting a goal in the first minute, but we looked at it as we have 89 minutes to get back into it. The guy’s reaction to that was awesome as they controlled the game and controlled the possession from that moment on,” said head coach Bo Oshoniyi. “The boys have really bought-in that we can still win this conference, and we are all excited about it. Holt has put in a lot of work since he came to ETSU, and I am happy to see him earn his first goal.”

The Bucs will travel to Greenville, S.C. to face-off with the top of the SoCon Furman Paladins. The game will start at 8 p.m. at Stone Stadium.