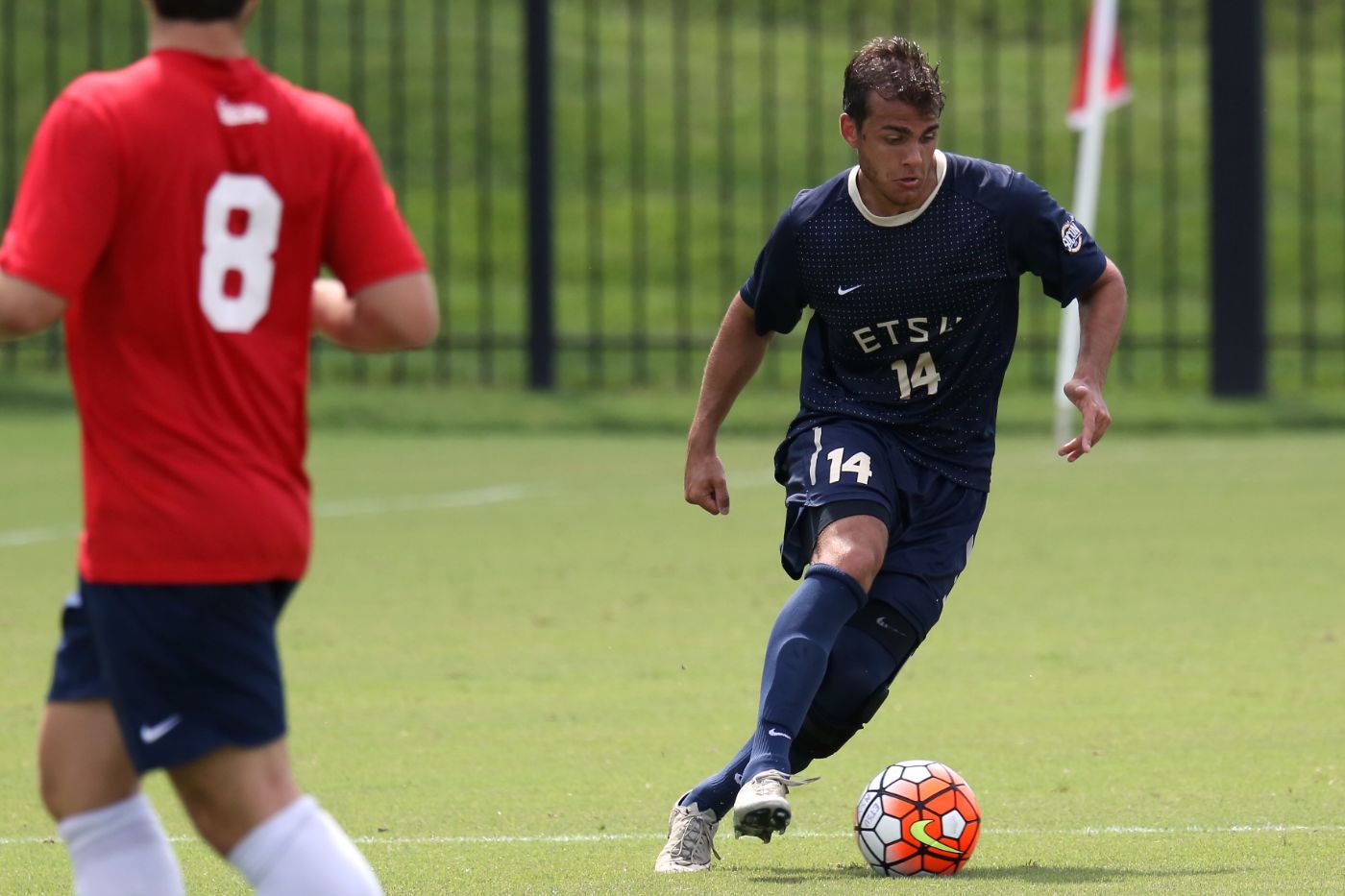 Sam Sevigny had a shot on goal in the eighth minute that could have put ETSU up 1-0.
Bucs' win streak snapped in Macon
East Tennessee State at Mercer | October 27, 2015
Related Links

Mercer’s defense was strong throughout the first half as they limited the Bucs to just four shots with two on goal. The best chance came for ETSU in the 9th minute when Sam Sevigny (Quebec, Canada) took a shot from outside of the box. His shot was tailing towards the left side of the net, but the Mercer goalie, Jeremy Booth, made a diving save.

The Bears attempted three shots within the first 18 mins. The first goal of the game came in the Bears’ favor as Max Poore scored his first goal of the season. Mercer worked up the right side, and Jordan Duru served the ball towards the right post of the ETSU net. Poore eventually found the ball and knocked the ball on the left side of the net for the early 1-0 lead for MU.

After the early advantage for Mercer, the Bucs could not put together a strong chance to tie the game as they only took three more shots in the remaining 27 minutes.

The second half started rough for ETSU as they committed two fouls within the first four minutes of the half. The second foul was called in the box and gave the Bears a penalty kick opportunity. Poore took the kick from 12 yards out and kicked the ball to his right. Freshman goalie, Jonny Sutherland (Chester, U.K.), made a diving stop, but the ball ricocheted back to Poore who tapped it in the left side of the net. The Bears pulled away 2-0 in the 49th minute after giving up their seventh penalty kick this season.

Mercer extended their lead in the 62nd minute after a defensive miscue on the Bucs. Duru was given the ball from Jake Mezei in front of the net and was able to kick it in to the right side.

ETSU did not surrender as they had James Smith (Eastbourne, England) and Mitchell Cecatiello (Pascagoula, Miss.) each take a shot that could have found the back of the net. Neither of their shots did as they both went wide.

Tonight’s match was one of the lowest shots attempted in a game for the Bucs as they finished with nine and two on goal. Mercer had 11 shots with six on goal. Sutherland corralled three saves as compared to Booth’s two. ETSU also committed 13 fouls on the pitch compared to Mercer’s seven.

ETSU’s next game will be the season finale and will take place at Summers-Taylor Stadium in Johnson City, Tenn. The Bucs will square off with the UNCG Spartans on Saturday, October 31 at 7 p.m. The Spartans are currently leading the conference and look to claim the first seed in the conference tournament.