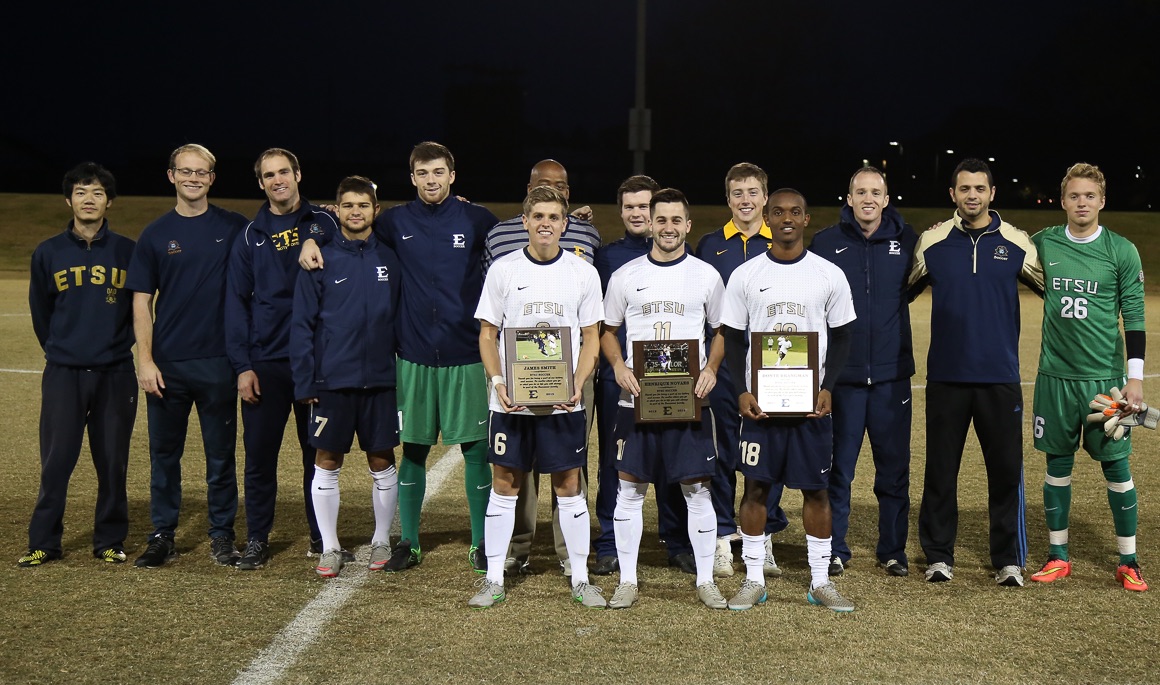 The first half started slow for both teams. The Bucs attempted two shots in the first half. The first shot came off the foot of sophomore Cameron Woodfin (Old Hickory, Tenn.), but his shot was saved by the Spartan goalie, Jon Milligan.

The Spartans outshot ETSU in the first half five to two with three to one on goal. Senior Henrique Novaes (Vinhedo, Brazil) started the match and had one shot attempted in the first 45 minutes, but the shot was blocked by a defender.

The second half changed for the Spartans as they came out firing to start the half. UNCG had a shot by Mattieo Busio, which was saved by goalkeeper, Jonny Sutherland (Chester, U.K.). Despite the immense pressure from the Spartans, the Bucs were the team to strike first.

In the 60th minute, the Spartans were working hard on the attack on the left side. Keegan Sanders (Kennesaw, Ga.) kicked the ball into the UNCG half after breaking the attack. Woodfin made a nice play to keep the ball in play and was able to push a two-on-two opportunity with UNCG. He dished the ball off to his left to Fletcher Ekern (Knoxville, Tenn.) who knocked the ball into the right side of the net for the 1-0 advantage.

Just three and a half minutes later, UNCG retaliated. Damieon Thomas entered the game just seconds before Jacques Francois knocked the ball to Thomas. Thomas kicked the ball from the left post from outside of the box and made the ball curl into the left side of the goal. The Spartans knotted the game at one a piece.

The Spartans took nine more shots in the remaining 27 minutes with three on goal. The Bucs were only able to get one shot off after the tying goal. ETSU was able to hold on to the one to one tie and push the game into overtime.

The first overtime had no shot attempts by either team. The Spartans had the advantage in the half as they had two corner kick opportunities even though no goals were produced.

The second overtime, the Spartans tried desperately to find a goal as they took five shots with two on goal. Leeroy Maguraushe took two of those shots and had one on goal. The ETSU defense stopped the Spartans from gaining an advantage and held them to a 1-1 final result.

“We faced a good team today. They pressed a lot through the match and had a lot of pressure throughout the game. It was two really good teams facing off”, said Novaes. “It was actually my first full match at ETSU, and it was a hard fought and emotional game. We have started playing as a team and our defense has really improved. I think we are in a good spot to make a run in the tournament.”

The Bucs had just four shots with two on goal, which is the lowest this season. Sutherland saved nine shots in the match, which is a season high for him. Francois led the UNCG team with six shots and three on goal. Busio had four shots with three on frame.

“Our seniors are tremendous people. Each one of them has a bright future ahead of them, and they are just great teammates,” said head coach Bo Oshoniyi. “We had chances in the game to score, even though the shot total doesn’t show it. This was a big confidence boost to compete with a high caliber team. We really made them play for the tie.”

“I am exciting to face Wofford. It will be a great match with a lot of intensity. As everyone knows by now, it will be a high-scoring affair, which makes for a good matchup,” Oshoniyi said.

After ending the game in a tie, the Spartans claimed the overall top seed in the tournament and will play the winner of ETSU’s next match.

The Bucs will square off against fifth seeded Wofford on Nov. 7 at 7 p.m. at Summers-Taylor Stadium. This will be the first round of the SoCon Tournament.