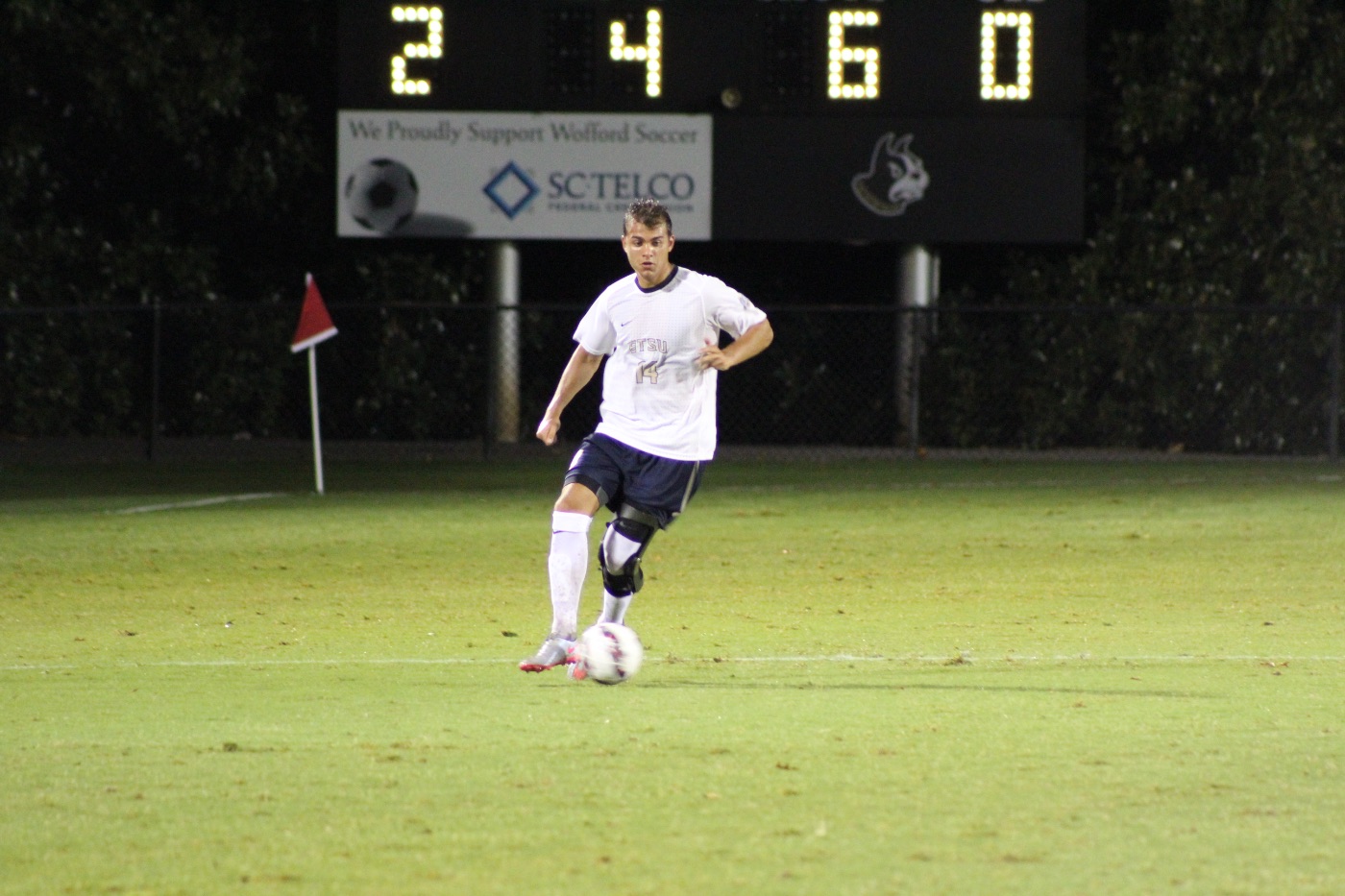 Sam Sevigny and the defense play strong defense to pitch their fifth shutout of the season.
ETSU advances to SoCon semifinals after historic 5-0 victory
Wofford at ETSU | November 07, 2015
Related Links

Cecatiello started the scoring in the 25th minute as James Smith (Eastbourne, England) knocked a lead pass from midfield. Cecatiello split the defense and scored the first goal of the game that found the left side of the net.

Ekern knocked in back-to-back goals in the 27th and 35th minutes. Ekern found himself in the middle of several Terrier defenders when he cracked a shot that found the back of the net. Cecatiello was awarded the assist for his second of the season.

Ekern’s second goal of the game came off a free kick for ETSU. Cameron Woodfin (Old Hickory, Tenn.) fielded the ball first from Noaves, who took the kick. Woodfin knocked the ball towards the left post and found Ekern. He controlled the ball and kicked the ball over the line for the 3-0 lead.

The final goal of the half came from Novaes, and it was his first collegiate goal. Ekern worked the ball up the left side of the field and kicked the ball to Novaes, who was in the middle. Novaes cranked a shot that curled in the upper-right hand corner of the net in the 40th minute to advance the score to 4-0.

Smith added the fifth goal of the match in the 62nd minute; Joao Ramalho (Monte Santo, Brazil) took the corner from the left side and dumped the ball to Smith. Smith took the ball and took a perfectly placed shot that found the right side of the net for his sixth goal of the season.

“We played as a team. Looking at the stats, we weren’t that different, but we were able to get second chances and were able to bury the shots when Wofford couldn’t,” said sophomore defender Sam Sevigny (Quebec, Canada). “Coach Bo has pushed us all year with a defensive mentality and getting shutouts, and that is what we were able to do tonight.”

With the five-goal difference in the game, this was the largest winning differential in ETSU men’s soccer history. It is also the most goals scored in one game (5). This also tied Ekern’s most points in a game with five (two goals and one assist).

“We had a good performance today. We were committed to each other, and that is what gave us the win,” said head coach Bo Oshoniyi. “The four goals in the first half took a little steam out of Wofford, and it put us in the right direction to face UNCG.”

The Bucs ended the game with five players leading the team with two shots. Ekern led the team as he went perfect with two shots and two goals. He also moves to second in the SoCon in points with 23 and retakes the lead with the most goals this season (10).

ETSU moves on to the semifinals of the SoCon Tournament and will face UNCG on Friday, Nov. 13 at 3:30 p.m. at Summers-Taylor Stadium. No 3 seed Mercer will face No. 2 seed Furman in the other semifinal match at Summers-Taylor stadium. That game is set to start at 6 p.m.