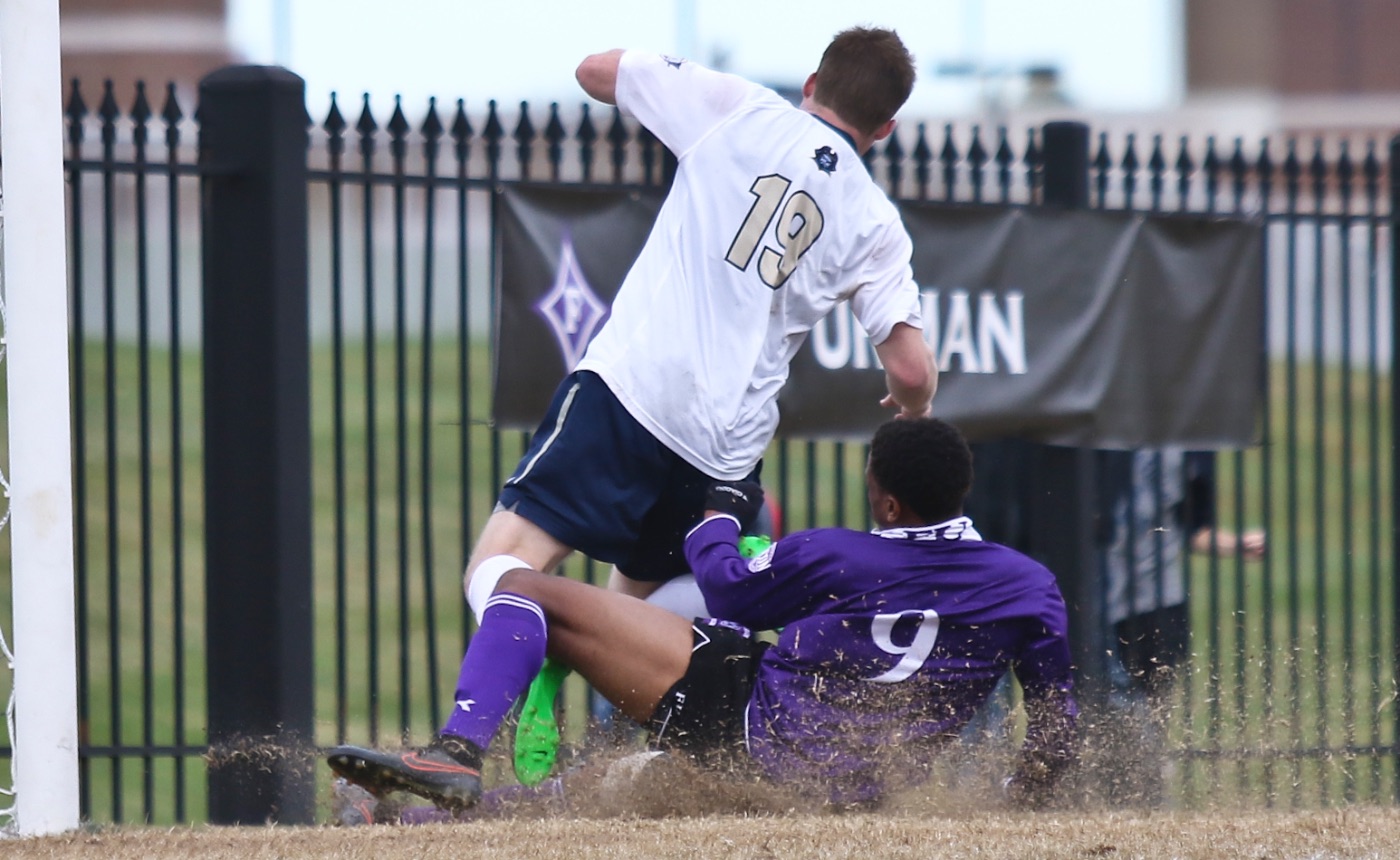 ETSU falls in the SoCon Championship match against Furman after strong push in second half.
Bucs fall 1-0 after valiant second half effort against Furman
FUR at ETSU | November 15, 2015
Related Links

Johnson City, Tenn. (Nov. 15, 2015) – The ETSU Bucs fall 1-0 to the Furman Paladins on Sunday afternoon in the championship match of the SoCon Tournament.

Early in the first half, neither team took many chances to put shots on goal. Just 9 minutes into the game, the only shot taken was by Joao Ramalho (Monte Santo, Brazil). However, the Paladins scored the first goal in the 10th minute.

After some back-and-forth play in the first half, Furman led ETSU in shots with eight and two on goal. ETSU had five shots with two on goal, The Bucs took just one shot in the last 12 minutes that was ultimately saved by Furman’s keeper Sven Lissek.

Head coach Bo Oshiniyi went into half with his team down 1-0, but he delivered a message at half time. “I told them we just needed to work harder and not be afraid of taking shots. We were still in the game,” said Oshoniyi.

The Buccaneers received the message and delivered early as they dominated the possession early in the second half. ETSU took six shots with two on goal in the first 13 minutes.

The moment the Bucs could have tied the game came in the 68th minute. ETSU had quarter-attacked on Furman and had numbers on their side. Mitchell Cecatiello (Pascagoula, Miss.) went one-on-one with Lissek, but Cecatiello’s shot curled just behind the net and ended the attack.

After not receiving any corner kicks in the first half, the Bucs had seven in the second half and had chances to score off them. One chance occurred in the 71st minute when James Smith (Eastbourne, England) took the kick. Chase Clack (Memphis, Tenn.) found the ball and put a shot on goal but was stopped by the Paladins defense.

ETSU had another chance off a corner kick in the 74th minute. Ramalho took a shot inside the box had his shot blocked by the Paladin backline.

In the last 15 minutes of the match, ETSU took just one shot as momentum started to favor Furman. The Paladins could have put the game away in the 82nd minute but was saved by a sliding Jonny Sutherland (Chester, U.K.).

The Bucs couldn’t net the equalizer in the second half but dominated the last 45 minutes. ETSU outshot Furman 14-5 in the second half with 4-1 on goal. Lissek ended the game with six saves and was awarded the Most Outstanding Player of the tournament.

“Furman didn’t have too many chances in the second half. We knew they like to put crosses inside the box and use the long ball,” said Sutherland. “The second half we were not challenged much because our defensive midline stopped their counters early.”

“We had to make a change from the first half. We sent our outside backs higher on plays to push pressure on them. We just needed to settle the game, and we did that,” said defender Corentin “CoCo” Ohlmann (Sainte Maire, France).

The Bucs were awarded the runner-up trophy after the game, which was accepted by Oshoniyi and the three players that are leaving ETSU due to their last year of eligibility.

“I want to say hats off to Furman. I am happy for them, and they deserved to move on. They are the gold standard in our conference, and we went toe-to-toe with them,” Oshoniyi said. “Just looking forward, we are a young team, and we have a positive feeling we are going to do great things next year.”

ETSU had three players on the All-Tournament Team: Sutherland, Smith, and Ohlmann.

“I feel grateful when I am given awards like this. I am obsviously disappointed by the result, but we played well and pressured Furman,” said Smith. “Their keeper (Lissek) played a great game, and the team deserve to advance to the NCAA’s.”