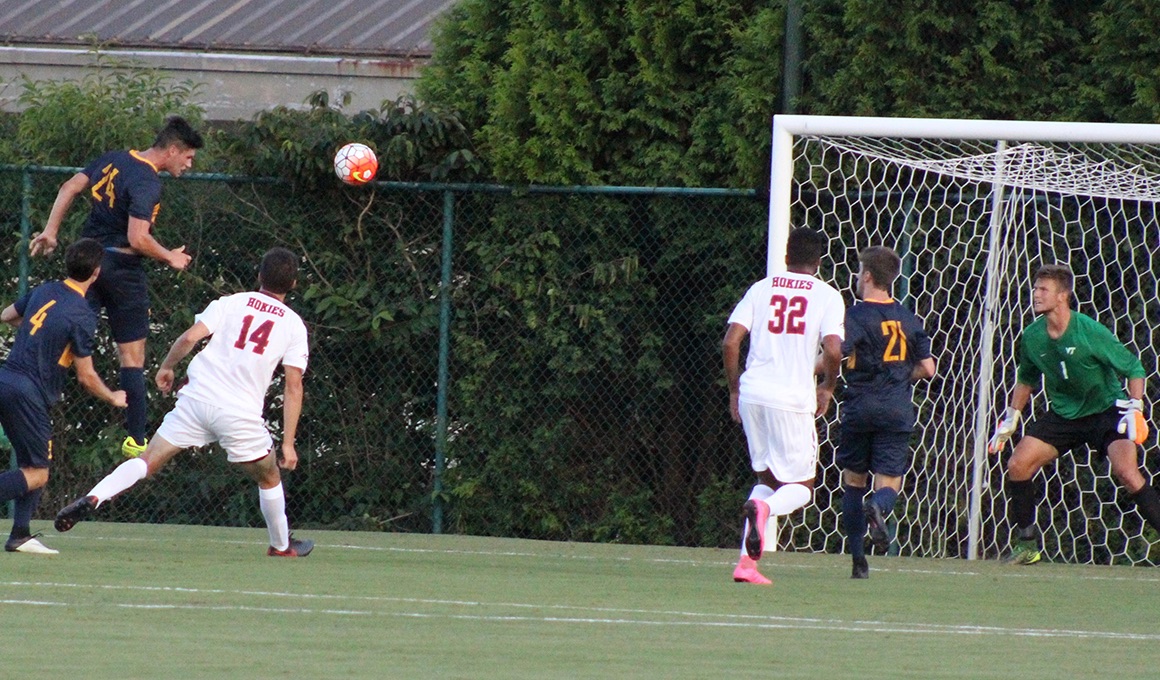 Fletcher Ekern heading a shot on goal, which led to Mitchell Cecatiello's goal at the end of the first half.
Bucs fall to Virginia Tech in preseason opener
ETSU at Virgina Tech | August 16, 2016
Related Links

BLACKSBURG, Va. (Aug. 16, 2016) – In the first preseason match of the season, the ETSU men’s soccer team traveled to Virginia Tech and fell 3-1 despite putting five shots on goal at Thompson Field on Tuesday.

Early into the match, neither team maintained most of the possession. Both teams tried to work quickly out of the gate, which led to several miscues by both squads.

Virginia Tech had the most chances on goal as they took multiple shots in the first 25 minutes. Jonny Sutherland (Chester, U.K.) knocked down a shot in the 5th minute to keep the score level early on. Joao Ramalho (Monte Santo, Brazil) took the first shot for the Blue and Gold in the 19th minute, and the Hokie keeper had to make a diving save to his right to prevent the shot from finding the net.

Just 14 minutes later, Virginia Tech scored the match’s first goal in the 34th minute. A Hokie winger crossed the ball from the left side to Ryan Marcano. Marcando took a shot on goal, and Sutherland made a save from a few yards out. However, the deflection went straight to Som Essome who knocked the ball into the open net.

Nearly two minutes later, VT took advantage of defensive miscommunication as Elias Tamburini and Nico Quashie took one-touch passes into a one-on-one situation with Sutherland. Quashie struck the ball and found the back of the net to extend the lead by a pair, 2-0.

The Bucs didn’t back down as they cut the lead in half in the 40th minute. Luke Parker (Memphis, Tenn.) worked up the left side and fed a cross into the VT box. Fletcher Ekern (Knoxville, Tenn.) put a head on the pass, but the Hokie goalkeeper saved the shot. Similar to Virginia Tech’s first goal, the deflection proved costly as Mitchell Cecatiello (Pascagoula, Miss.) tapped the ball into the net for ETSU to make the score 2-1.

The Buccaneers tried to tie the game with two minutes remaining in the first half. Nick Spielman (Melbourne, Fla.) found himself open just outside the 18-yard box and struck a shot on goal, but Ben Lundgaard made a diving save to hold on to the narrow 2-1 lead going into half.

When asked about what went well at the end of the first half, Cecatiello said, “We started to put things together by connecting passes, running off each other, reading each other, and talking and communicating with one another.”

After tallying five shots in the first half, the Blue and Gold could only muster one shot that was blocked in the 59th minute. After several substitutions by both squads, Tech padded their lead as Forrest White found the bottom left corner of the ETSU net.

“You could tell we were just a few days into the preseason. I do think there is a lot to work on. We have some great video to watch and see where we are going forward,” said head coach Bo Oshoniyi. “I think we are moving in the right direction though. I think this was a good test for us against a really good Virginia Tech team.”

ETSU sent in 21 players in the first exhibition of the season, and the team was efficient offensively as they took six shots with five being on goal. Both keepers for the Bucs, Sutherland and Daniel Adelman (Johnson City, Tenn.), tallied two saves in the match, and Cecatiello led the team with two shots and the only goal.

“We have to build a mentality so when the game isn’t going right, we can work together to keep the lead if we're in that situation or try to find a way to win the game,” said Oshoniyi.

The Blue and Gold will return to the pitch on Aug. 20 at home versus Milligan College. Kickoff is set for 7 p.m. The first regular season match will start on Aug. 26 at High Point University.